The Egyptian Tarot of Thelema trump for the 29th path of Pisces is Khonsu XVIII. Khonsu is the ancient Egyptian god of the Moon, the Sky Traveller. 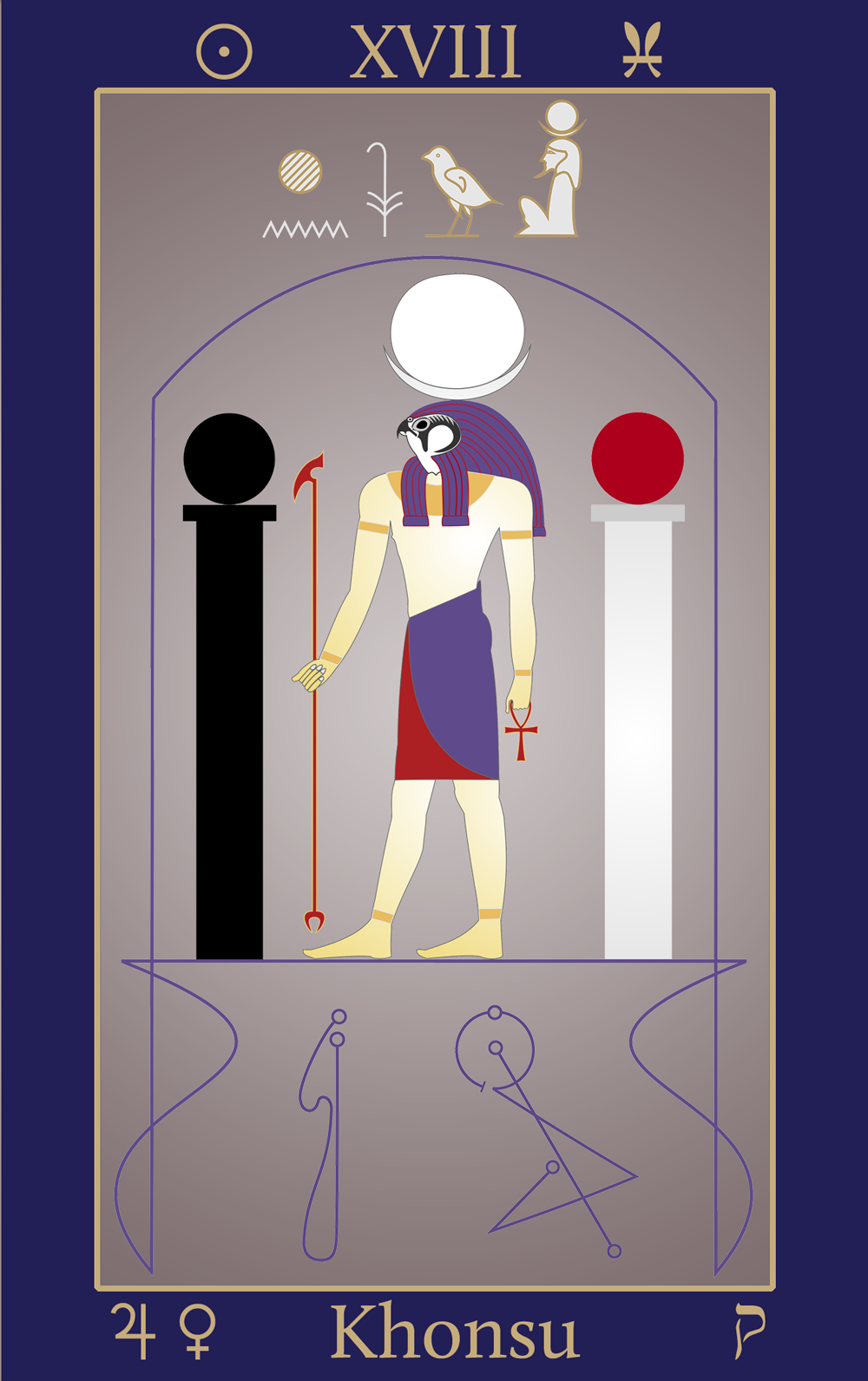 The esoteric title of the trump is Ruler of Flux and Reflux: Child of the Sons of the Mighty. The 29th path of the Tree of Life extends upwards from Malkuth (the Kingdom) to Netzach (Venus). Khonsu’s hieroglyphic name is at the top of the picture. The hawk-headed god of the Moon is at the centre, going forth between two pillars. He bears the priestly was sceptre in his right hand and the Ankh of Life in his left.

Khonsu is regarded as the son of Mut and  Amoun, and he is closely identified with both Tahuti and Horus at Thebes (Egyptian Waset). The crown of Khonsu is the full disc and crescent of the Moon; it is not a coincidence that the shape formed from this composite glyph is identical to that of the hieroglyphic Eye of the Moon or Left Eye of Ra. The human psyche is reflective as the shade of the Moon; to see Ra with clear or pure perception is to know God and (therefore) to be known by God—the Ever-Becoming.

The Moon has three faces: white (or silver), black and red; she is white at the full, invisible in the dark phase and scarlet at the eclipse. The globed capitals of the pillars and lunar crown of Khonsu are also suggestive of the supernal triad of the Tree of Life, where Kether is the ‘higher moon’.

The figures are skryed through the domed hieroglyphic Gate of the Moon. This is a stylised version of the Egyptian determinative for ‘foundation’. In the lower section is the telesmatic name of Shad Barshama’ath Shartathan, the Spirit of the Spirits of the Moon, as drawn on the Kamea of the Moon. The name adds to 3,321, the sum total of all the squares on the Kamea and can be translated, ‘Elemental Child born from the Oracle of Joy’.[1] If the name is looked at Qabalistically, it yields some fascinating nuances. Barshama’ath can be construed as ‘Spirit of clear-seeing’, viz., clairvoyance.[2] The true meaning of clairvoyance, ‘seeing things clearly’, is to apprehend pure knowledge and is not to be confused with psychism. Barshama’ath also has the meaning ‘pure name’, and Ma’at is the Lion of Truth.[3] Yesod, the sphere of the Moon, is called the Pure Intelligence.

Shartathan denotes Thoth as Chief of Scribes. Thoth, or Tahuti as known to the Egyptians, was originally a god of the Moon, like Khonsu. On the lower arc, the Moon is typically associated with magical mirrors, skrying and clairvoyance. The magick ‘writing’ of Tahuti is that which appears in the clear mirror of perception.

The astroglyphs for Pisces and Jupiter, the ruling planet, are at the lower edge of the card. Qoph, the letter of the path, is to the right. The letter Qoph symbolises the skull, a symbol of the primordial ‘cave’, which resides in the heart of the holy mountain. On the corporeal level, the 18th Tarot card corresponds to Pisces and the Moon as regulator of organic life.

The Moon of Pisces

The Sun’s entry into Pisces near the end of the cold months is a reminder of the darkest hour before the dawn. The springtime is not far away. In the southern hemisphere it is a reminder that the cooler air of autumn will soon drive out the burning heat of a long summer.

Pisces is traditionally ruled by Jupiter, known to the Greeks as Zeus and to the ancient Egyptians as Amoun (or Amen).[4] Khonsu, god of the Moon, was thus ordained as the child of Mut and Amoun at Thebes. Jupiter, Zeus and Amoun were originally gods of the mountain, and of the seas and rains that replenish the earth with new life and growth. Amoun is a mysterious god. He is self-created, and his location, unlike the sky-gods Horus, Hathoor and Nuit, is below the horizon. He is the Hidden God.

The Qabalah throws further light on the association between the Hidden God and the mysteries of Pisces, sign of the Fishes. The 29th path connects the material universe (Malkuth) with the animating power of Venus (Netzach), the morning and evening star. The magical power of the path of Pisces is the Twilight of the Place. As the days begin to lengthen in the northern hemisphere, the twilight is very noticeable. This is especially so with the lengthening of shadows near sunset, before Venus, the first and brightest star of the evening sky, appears in the west. The magical twilight is also the special light of a room prepared for ritual. Candles and the smoke of incense provide ideal conditions for the arising of spectral images. The Magical Mirror is thus the magical weapon of Pisces.

Child of the Sons of the Mighty

The title of the 29th path is the Corporeal Intelligence, so-called because it is concerned with the incarnation of all bodies according to the revolution of the Zodiac. The root of the word that is translated ‘corporeal’ (gosham) implies a violent rainstorm or shower—the ‘shower of the life of earth’ that comes through the seed of the Unborn Spirit or Holy Guardian Angel in the ritual called the Bornless. The ‘seed’ is alchemical and refers to the fluidic or formless fire from which all forms receive their essence. The “revolution of the Zodiac” is explained by the operation of Sol and Luna as the governance of Spirit acting upon the Zodiac through the four classical elements of nature. All bodies are composed of these elements. Each creature has a unique astrosome, the symbol of which is the natal horoscope, varying according to the time and place of birth. The twelve signs of the Zodiac are cosmic archetypes. Merely knowing the sign of birth does not reveal a person’s nature. The sign alone symbolises a type, not an individual.

The descent of this path is the incarnation or embodiment of each creature, while the ascent of it implies knowledge of the Occult Intelligences.

The magical powers of the 29th path are of Bewitchments and Casting Illusions. When the light of the Moon is shed upon the earth (as ego), then the mind is bedazzled by magical glamour. It becomes absorbed in its own reflections, attributing objective reality to that which is no more than fleeting shadows. The shades (spirits, shadows) of the Moon may therefore deceive the foolish and profane. The gift of clairvoyance (‘clear sight’), on the other hand, is bestowed on those who truly desire to seek out the hidden stone of the wise. It should be understood that ‘clairvoyance’ or clear-sightedness as intended here has nothing to do whatsoever with any kind of psychic vision.

1. All Qabalistic references are from The Flaming Sword Sepher Sephiroth.
2. ShThM, 740, means ‘to open the eyes; to see clearly’.
3. BR ShMATh, ‘pure name’, also ‘first created’, i.e., to see the whole world as new or freshly born.
4. Most modern astrologers have substituted Neptune as ruler of Pisces. They similarly assign Uranus to Aquarius and Pluto to Scorpio, discarding the traditional rulerships and throwing the whole scheme into disorder.