The Egyptian Tarot of Thelema trump for the 15th path of Aquarius is Nuit XVII. The esoteric title is Daughter of the Firmament: Dweller between the Waters. 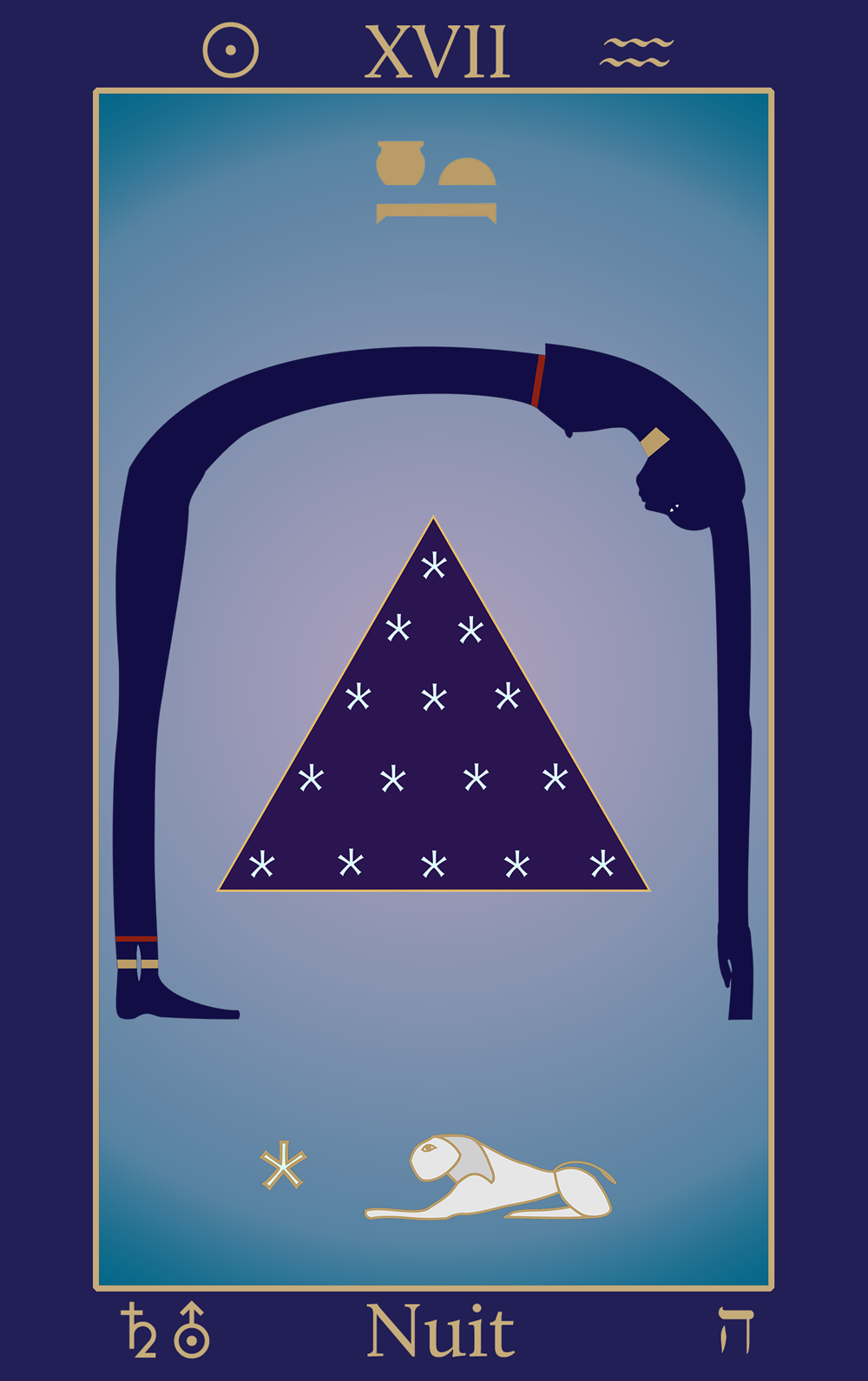 Nuit is depicted here as she appears on the Stele of Revealing. She is shown bending over the Star Pentactys, a pyramid of 15 stars.[1] According to the (Egyptian) Book of the Law, I: 15, to the Scarlet Woman, “is all power given”. Thus, in the lower section of the image is the ma’a Lion of Truth, Nuit’s power in the underworld typified by Leo, the opposite sign of the Zodiac to Aquarius.

The hieroglyphs of Nuit’s name are shown at the top of the card. The ‘pot’ determinative (nu) shows the nature of Nuit as the principle of containment in the cosmic sense, a body of stars. The hieroglyph for ‘sky’ or ‘space’ indicates the heavens above.

Depicted on the lower left border of the card are the symbols of Saturn, the astrological ruler of Aquarius, and Uranus, ruler of the Kerubic signs. Saturn is the principle of limitation and form while Uranus symbolises the limitless expanse of space. To the right is Hé, ‘a window’, the letter of the path. The shape of the letter is that of a nomad’s tent, as with beth. The tent is shown from the side, with the aperture drawn open at the top for viewing. The letter Hé of Aquarius has the value of 5. The window of ‘five’ is the image of the starry goddess Nuit through which the seer may inwardly perceive the primordial wisdom.

Nuit is esoterically associated with Sirius or Sothis, her star of manifestation. Sopdet, the Egyptian name for Sirius, is also the name of the goddess that gives birth to the star of Venus. It has the literal meaning, ‘triangle’. Sopdet (spdt) is equal to 393, Thelema, the word of the Law in transmission and reception. The heliacal rising of the binary star Sirius is constantly relative to the solar year, thus establishing the strong relation between terrestrial earth and Sirius, the sun-behind-the-sun of our solar system.

The rising of Sirius presently occurs on the 19th July, as measured from Cairo. In antiquity, the rising took place immediately prior to the summer solstice and heralded the onset of the Nile inundation. As viewed from England at the present time, the conjunction of Sirius with the Sun is for 70 days from July 3rd to August 11th.

During the time of the conjunction or occultation of Sirius, the legend of Isis has it that she hides herself in the swamps of the Delta (‘triangle’) region to give birth to Horus. Originally, Set-Hadit was the only begotten son of Nuit-Sopdet. The star of the Mother is manifested by her son, Set. There is in fact no ‘father in heaven’. The All-father was the invention of patriarchs and eventually, religious monotheists. The pairing of Isis with Osiris was likewise a relatively modern version of the legends of Isis that was better suited to the disposition of ancient Greek and Roman men than the original stellar myth.[2] 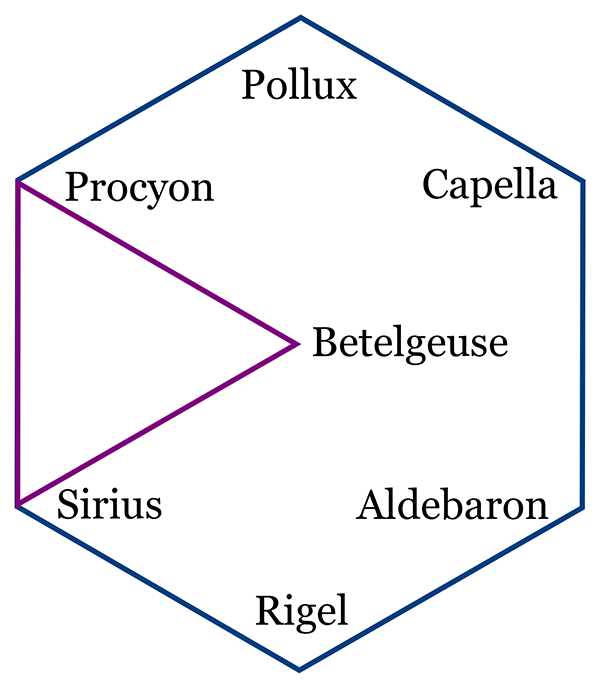 Sirius forms a group of stars with Betelgeuse (Alpha Orionis) and Procyon, called the ‘winter triangle’. This embraces much of the constellation of Monoceros, ‘Unicorn’. Four other stars, Pollux, Capella, Aldebaron and Rigel (left foot of Orion) form the ‘winter hexagon’. This establishes a geometric and mystical relationship between Sirius and Orion, which symbolises the Sah or magical body. Thus the Nephilim, sons of the Ancient Ones, are sometimes called the Children of Orion.[3] The geometry of the triangulation of Sirius with the hexagon, or hexagram by extension, automatically declares the Cube of Space, as can be seen by the diagram above. The triangle, hexagram and square spell the name Lux Occulta, ‘Occult Light’ or Aur Muphala, 364, which is a name of Kether as the ‘moonflower’. The number 364 declares the days in a lunar year, and is a number of Set, the ‘breaker of the circle (of the year)’ and the only begotten son-star of Nuit.

This configuration involves seven stars in all, thus proportionately mirroring the seven bright stars of Ursa Major, the ‘axle of the universe’, rotating while always pointing to the Pole. That is in fact the esoteric meaning of aleph, which corresponds to the 11th path and Tarot trump the The Seer 0. Aleph is not, as has long been supposed, the ox that ploughs the field but is the ox that turns the wheel or swastika of the stars. Likewise, lamed is not the scourge that drives the ox but is the Egyptian sickle ma’a that clears the way for truth (Maat), which is the Stellar Gnosis.

Nuit: Daughter of the Firmament

The 15th path begins in Chokmah, root of the will, and terminates in Tiphereth, the radiant beauty of love. It is called the Constituting Intelligence, and is the essence of creative force that arises in pure darkness. The 15th path corresponds to Aquarius according to the correction given in AL, I: 57,

The material manifestation or mundane chakra of Chokmah is the Zodiac. Tiphereth appears in visible nature as the sun, the life-giving spirit animating the zodiacal signs through the course of the year. The key to the Zodiac is the Moon and Sun as the governance of Spirit acting upon the Zodiac through the four classical elements of nature. The Zodiac is called Mazloth in the Qabalah. In the word is a key to the transmission of consciousness. The priesthood of Set, builders of the oldest pyramids, convey the secret of the starry wisdom or primordial gnosis. The (Egyptian) Book of the Law is itself such a transmission.

The root of the word Mazloth is mezla, a type of influx or influence from Kether or the North Pole of the universe. Mezla has the meaning of ‘flowing, to flow down in drops’. It signifies a whirling, spiralic or radiant force. As Mazloth is the name of the Zodiac, mezla refers to the stars of Draco and Thuban at the North Pole. The Dragon constellation is thus named because at one time it coincided with the Nodes of the Moon, the Dragon’s Head and Dragon’s Tail. The Dragon is a cosmic symbol of the Occult Force or Serpent Power embodying the polar electro-magnetic force of the universe.[4]

The description of mezla as ‘flowing’ and ‘drops’ alludes to the fact that the true crown or lotus of Kether is feminine. The equivalent sahasrara chakra of the Tantras is described, as we have stated before, as a ‘moonflower’. It is unique among all other chakras in that its lotus flower is turned downwards, so as to pour forth starry dew or nectar. The ‘one’ that is afforded Kether in the scheme of things is not a singular state of affairs but is the principle of love or union. Crowley’s isolationist statement in Liber 777, that the number one is “the goal not the means”, and that it is therefore “too simple to serve the purpose of the magician”, is false.[5] The ‘one’ is the means of yoga, as concentration of thought and the uniting principle. It is not an end or goal. There are no goals beyond the Abyss. Thus, Crowley was chastised by Aiwass in AL, I: 48:

My prophet is a fool with his one, one, one; are not they the Ox, and none by the Book?

The number of the verse, 48, is that of Kokab or khu-khabs, the Star of Nuit. Furthermore, the ‘one’ is not an ‘opened out circle’; it is the axis formed when a point is moved within a circle or sphere. It does not exist without the circle of Nuit, or as in any way separate from her circumference. Hadit is not depicted as a straight line but as a Serpent or winged disc going forth. As a figure, the ‘one’ has no meaning without the infinitude of all other possible numbers. As declared in the oracle of Nuit in AL, I: 2,

Every number is infinite, there is no difference.

1. The Pentactys extends the baseline four of the Pythagorean Tetractys by one, to five. It is the geometric symbol of Nuit and her company of heaven. There are 15 stars in total. The number 15 is the Grand Number of the Pentagram and the extension of the letter and path of Nuit as ∑ (1–5) = 15. There are altogether 75 (Nuit) radiations of the Khabs (5 x 15). The pyramid and star together form the hieroglyphic determinative for Sirius, the star of Set and the Isis (Aset) of Egypt.

2. The Greeks named the constellational home of Sirius as ‘Dog’, and Sirius, its brightest star, the ‘Dog Star’. If we take what the epic poets wrote at face value then we may conclude that the Greeks and Romans supposed the occultation of Sirius or ‘dog days’, coinciding with summer heat, to be an ill omen. Curiously, they also thought this caused women to become sexually aroused. We must suppose they also found that disagreeable. By this time, all knowledge of the ‘space marks’, the occult alignments of the stars, was long forgotten or had otherwise been systematically repressed.

3. The Nephilim are first mentioned in the book of Genesis, 6: 4. In Numbers, 13, their descendants are called the ‘sons of Anak’; very tall, strong men that had remarkable powers and that had created a veritable paradise on earth.  Anak (ONQ) means ‘giant’, but also refers to a necklace or collar, somewhat like the Egyptian menat, worn by gods, kings and queens. Numbers recounts how Israel sent out 12 spies to the country of the sons of Anak, as there were rumours of a paradise there, a land “veritably flowing with milk and honey”. The spies came back with grapes so big that they had to carry them on a pole. When asked if the land could be plundered, the spies said it could not, because the sons of Anak were very tall and strong. And that, “We were as grasshoppers in their eyes”. The Old Ones will return once more to inherit the earth, however, when the reign of the present mutant race of terrestrials is at an end.

4. For a detailed examination of the cosmic serpent, see ‘Star and Snake of Egypt’, Babalon Unveiled! Thelemic Monographs [Ordo Astri].