The Egyptian Tarot of Thelema trump for the 18th path of Cancer is Atet VII. The Moon, the Lunar Flame, is the ruler of Cancer the Crab or Scarab. The Atet or sun boat of Ra is here depicted in the centre of the Tarot design. 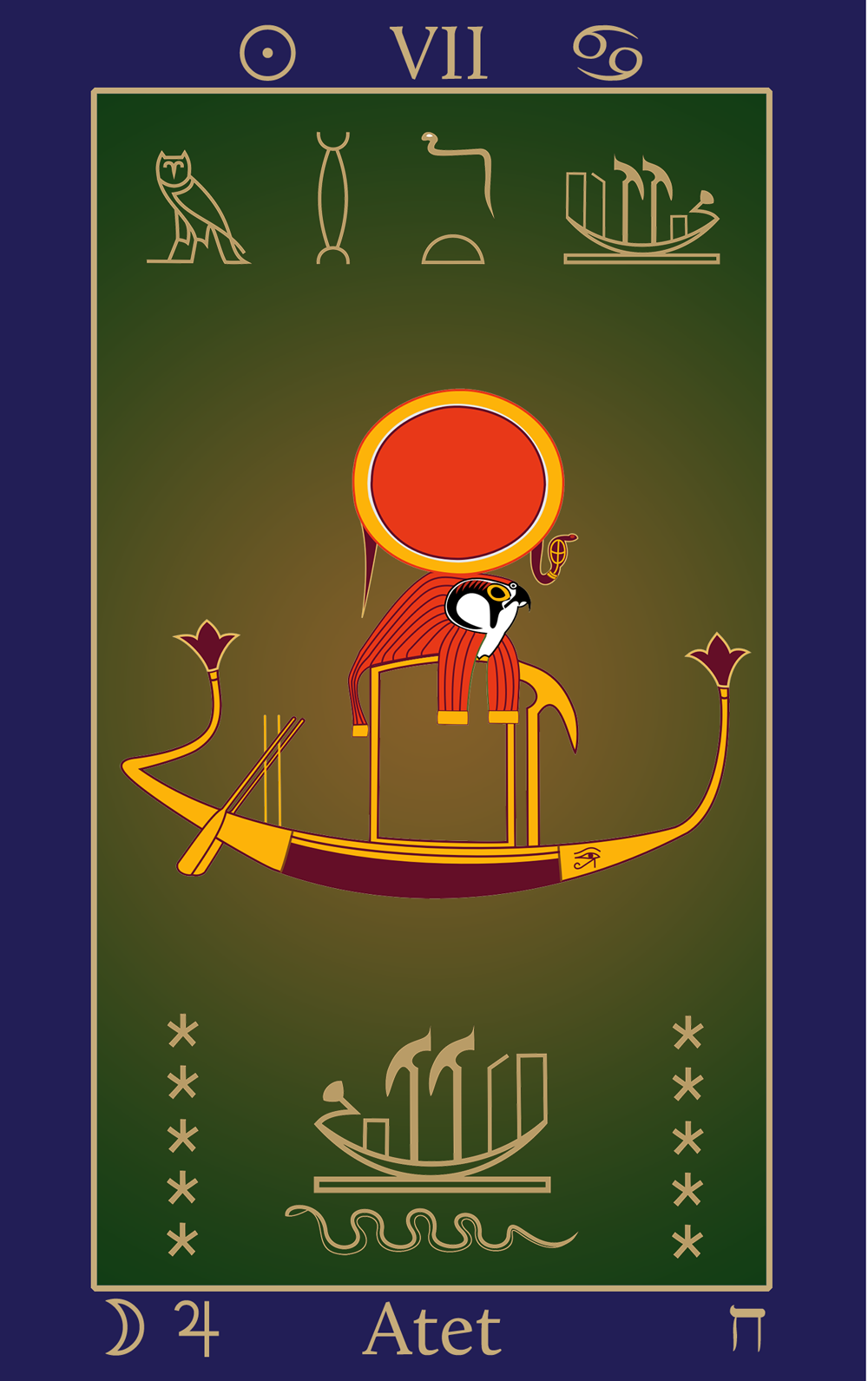 The motion of Ra defines the expanse of the sky, the reach of heaven. Thus the invisible Sun of Spirit is concealed or clothed in light. The barque or sun boat of Ra is also therefore the marker of time. If the sun boat should be stopped in its tracks, as is told in the legends of Isis, time would cease.

The esoteric title of the Tarot trump, traditionally named ‘The Chariot’, is Child of the Powers of the Waters: Lord of the Triumph of Light. This is best explained through the Qabalistic title of the 18th path, Intelligence of the House of Influence. Cheth, the letter of the path, means ‘a wall or enclosure’. The enclosure of cheth is the sun boat itself. It is also the radiance of spirit called the Khu (or khu-t) in ancient Egyptian sacred texts including the (Egyptian) Book of the Law. In cosmic aspect, the Khu is the company of heaven referred to in I: 1–4.

Had! The manifestation of Nuit. The unveiling of the company of heaven. Every man and every woman is a star. Every number is infinite; there is no difference.

The 18th path of Cancer the Crab or Scarab is the intelligence linking the Understanding of Binah, the throne of Saturn, with Geburah, the Energy of Mars. From the interior of Binah, runes of secret knowledge flow forth via the Abyss. Secreted in these shades or stars is the key of union with Nuit, the Queen of Space. The power or intelligence of the 18th path is experienced as consciousness that flows like water from the innermost depths.

The Sun is said to enter the house of his mother at the solstice. He is thus at his height, or depth from the point of view of the southern hemisphere of the globe. The Atet or sun boat of Ra is the original type of the solar chariot, which later became the triumphant vessel of kings and warriors. The Holy Graal or Cup of Binah is reflected across the Abyss in the magnificent sphere of Gedulah or Jupiter, which attains exaltation in the sign of Cancer.

The hieroglyphic name Atet is shown at the top of the Tarot picture. The name is pronounced an-djet, with the soft ‘n’ sounded as in ‘sing’.[1] The hieroglyph for andj is frequently depicted as the shuttle of Neïth, the House of the Net.[2] Thus she is the sky-weaver who spins the threads of light defining heaven and earth, manifesting the worlds that receive life from Ra, the supreme principle.

Ra travels on the Atet Boat of Millions of Years when he is visible in the heavens. His companions include Sia (vision, perception) and Hu (will, command), as well as Heka (magick power). During the evening, Ra sets in the west as Atum or otherwise in the form of a ram, and enters the duat or Egyptian underworld. In some legends he is swallowed into the mouth of Nuit, the sky goddess, and thus his journey through the duat is a journey through her body. In the duat, the sun boat is named Sektet. Apep (Apophis), the opposer of the light, appears here as a great serpent. Every night Apep attempts to stop the journey of the sun boat with his hypnotic stare. Set, who accompanies Ra on the sun boat, assists Ra by overcoming the serpent. By morning, the night boat reaches the end of its journey through the underworld and Ra is reborn from the womb of Nuit.

Secrets of the Sun Boat

Much of the labour of the Great Work is to make the frail human personality a suitable vehicle for the influx of cosmic consciousness that would otherwise overwhelm it. The preliminary work is to train the mind and increase the power of concentration—to hold an image steady in the mind like an unwavering flame. The mental powers are then applied to the building of a chariot or astral vessel, as depicted in the Tarot trump.

The Atet is the vehicle of will called the resurrection body in mysticism. Such a magical vessel may negotiate the secret paths between the stars. The Holy Ghost and Holy Graal are cognate terms. The Cup of Babalon or Binah is the receptacle from which the feminine spirit, Khu or Shekinah, is imbibed, producing divine intoxication—not to be confused with ordinary drunkenness. The resurrection body is introduced in Liber AL, I: 8,

The Khabs is in the Khu, not the Khu in the Khabs.

Lord of the Triumph of Light

The magical power of the 18th path is the Power of Casting Enchantments. The ancient Egyptian image for Cancer is the scarab beetle, Khephra. When Ra is in the underworld, he visits all of his various forms and thus undergoes the transformations that prepare him for rebirth from the body of Nuit.

Khephra, or the sun at media nox, is the supreme totem of enchantment and of all transformations. Khephra is the neter (principle) of Becoming. Khephra is self-created, self-born, self-becoming, ever changing and ever living. Khephra is the Becoming—the magical transformative principle itself, by which the soul is able to pass through the underworld. The underworld, or body of Nuit, is the vessel and means of transformation. At the end of the night, the soul emerges as a radiant Khu or Phoenix—the resurrection bird. It is the accomplishment of the Great Work.

1. At, atu, ‘moment of time, minute, hour, culmination of an act’. At-t, ‘bed, couch, bier’ and ata, ‘boat’. Also, ā-t, ‘chamber, house, place, temple’. See Budge, An Egyptian Hieroglyphic Dictionary, Volume I pp. 12–13. The root of the noun is cognate with all senses of the chariot in the various traditions, including the nuptial  place of repose for Shiva and Shakti in the tantrik tradition. From it is derived ‘Atu’, the name of the Tarot trumps. In The Book of Thoth, Chapter III, Crowley poured scorn on the notion that atout, the French word for ‘trump’, might be etymologically derived from Atu, ‘House’. However, the Egyptian language is far more ancient than Latin or Greek!