Some have speculated that John Dee’s book of Enochian Keys (or Calls) is a theurgic operation comparable to opening the seven seals of the Apocalypse. Commentators and critics regard the subject from a strictly scholarly and so exoteric point of view, and are not in any way qualified to explain esoteric matters. However, the line of thought is an interesting one and appears to have some justification when the Keys are studied and practiced over a lengthy period of time. 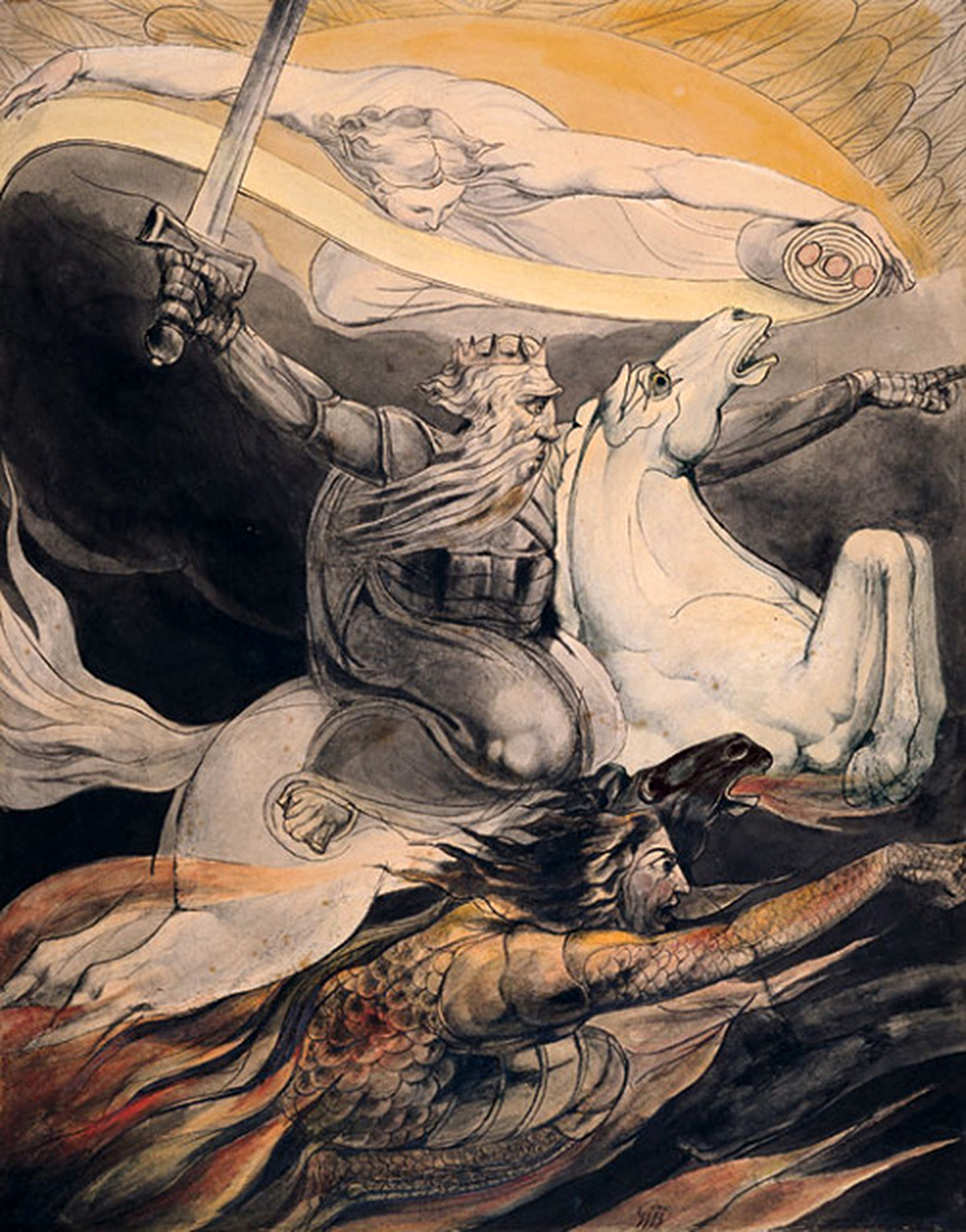 ‘Apocalypse’ is the title of the New Testament book of St. John, the book of Revelation. The word ‘apocalypse’, from the Greek root apokalypto, means ‘to reveal’. The book’s title is frequently confused with ‘Armageddon’, a word from Revelation 16: 16 that refers to a kind of ‘last battle on earth’, a war between spiritual forces and evil (anti-spiritual) forces before the Day of Judgement. The meaning of the word is sometimes taken out of context and reduced so that it refers to any catastrophic war between contending human forces. Such a battle, when understood as taking place between the spiritual and the material, is not the same as a ‘revelation’, though it might form a part of that revelation under some circumstances. The battle between spiritual and material forces must, by definition, always be ‘won’ finally by the spiritual, since the material has no existence beyond that which is strictly limited to the world of human affairs.

The Enochian Keys seem to include elements both of revelation and of the ‘last battle’. This is no doubt tempered by the fact that Dee’s translation (and so understanding) of the Enochian Keys was placed in language very similar to that of the King James English Bible—though that was not published until after his death, thought to be around 1609. The general agreement between the Enochian Keys and the book of Revelation, albeit placed within a perspective other than Christian theology, concords with the knowledge of all other traditions. It can certainly be taken as a warning of the drawing to a close of the Age of Darkness (Kali Yuga), which must come before the final dissolution. This has its reflection on more than one level. Spiritually, it is the expression of an eternal truth. On the psychic level, it expresses the need for regeneration so that spiritual realisation is even possible. One should then bear in mind that such an end is the beginning of renewal, wherein by fire all of nature is renewed and restored to original perfection: Igne Natura Renovata Integra.

It is not the intention here to create a commentary on all of the Enochian Keys, which would take at least a small book to accomplish. We will focus here on one of them, the 8th Key. This Key invokes the subquadrant angle of Earth of Air in the Terrestrial Watchtower of Air.[1] This region corresponds elementally to the Tarot court card Princess of Swords, the ‘Throne’ of the Ace of Swords. Her full title is Princess of the Rushing Winds, the Lotus of the Palace of Air. The suit of Air in the Tarot corresponds to the whole realm of the intellect in the microcosm, or on the human scale.

Beautiful is the first, which is as the third heaven made of pillars of Hycacinth, in whom the Elders have become strong, which I have prepared for my own truth, so saith the Lord; whose Eternal reign shall be as bucklers to the Stooping Dragon, and like unto the harvest of a widow.

The first and the third heaven is a technical reference to the order of the Watchtower Tablets and their subquadrants—in this case, the third angle (Earth) of the first Tablet (Air). Hyacinth is traditionally associated with peace but also desire in the spiritual sense of longing for eternal truth, in which alone is peace of mind in any real and lasting sense. The violet flowers in some varieties of hyacinth do indeed form pillars of six-petalled stars. The ‘six’ symbolises the meeting of time and eternity in the world centre or heart of all, and is figured by the hexagram of two interlaced triangles.

The Elders or Old Ones are frequently mentioned in the spells of the so-called Egyptian Book of the Dead. According to tradition these are the children of the Sons of the Gods (Beni Elohim) that spawned or manifested the original life-wave on the earth. In the Bible, their children are called the Nephilim, and their descendants the Anak—a word that has an identical meaning to that of Nephilim, ‘giants, tall, noble or renowned’. The ‘Lord’ is named IAD, ‘Holy’. This has the numerical value of 70, equal to the Greek omicron and Hebrew a’ain. Both letters are derived from the earlier Phoenician a’ain (or ayin), ‘an eye’—and both the sound and form can be traced back much earlier, to the ancient Egyptians.

Curiously, the name ‘Watchers’ has been applied to the Elders or Nephilim as mentioned in the book of Genesis. The apocryphal Book of Enoch, which has a more detailed and probably older account of this very ancient mystery, was not discovered until centuries after the time of John Dee. Dee named the language of the Angels ‘Enochian’ as his intention had been to psychically recover what was at that time the ‘lost’ book of Enoch.

The last line of this first stanza, where it says that the eternal reign of the Lord shall be as “bucklers to the Stooping Dragon, and like unto the harvest of a widow”, may be understood metaphysically. The word ‘buckler’ is used in the book of Psalms, 18: 2:

The Lord is my rock, and my fortress, and my deliverer; my God, my rock; in whom I will trust; my buckler, and the horn of my salvation, and my high tower.

The Hebrew word is mageni, from the root MGN, which has the value of 93 and is thus equal to Thelema. A buckler was the name given to a heraldic device born upon shields; it sometimes refers to a goatskin shield (Greek aegis) worn by Athene. In broad terms, the strength and protection is the path itself, the Way. “The Lord is my rock” may also be associated with the holy mountain, for example Hermon in the ancient land of Canaan or Phoenicia, where Ashtaroth is both the name of a place and that of a hornéd goddess.

It was on mount Hermon that Christ Jesus was transfigured before his disciples, according to some sources. It was from near the summit, where still exists the highest shrine in the world, built from stone blocks, that the angels descended as according to the apocryphal book of Enoch. This is also recorded on a stele that that was stolen from the shrine and is now preserved in the British Museum. It was here that the angels were said to have taken the oath to descend and mingle with the daughters of men. From this it may be seen that the Nephilim were born of the first avatars. Mount Hermon is used in modern times for the purpose of military surveillance across some considerable distance. However, the view from the mountain is also analogous with the darshana (‘view’) of the Supreme Principle.

The transfiguration of Christ Jesus is then, at the very least, a recollection of the Elder race, to which he properly belongs according to tradition. For example, some of the Orphic texts support the same Gnostic theme: “I am a child of earth and stars, but my race is of the heavenly order”.

The “harvest of a widow” is an allusion to Binah, the Mother of Faith and the Foundation of the Primordial Wisdom (Sepher Yetzirah). Here is indicated the hidden or left side of Hekate, revealed to no mortal man. It is the ‘night’ or unmanifest side, that is pure observance or watchfulness, yet without manifest projection, ‘light’ or extrusion. It is the ‘hidden light’ (AVR MPLA) of the Qabalah, an attribute afforded Kether as the ‘height’, beyond the visible stars. There is mention of Machpalah, a ‘double cave’, in Genesis (19: 30–50:13), where one chamber is the light or manifest, and the other is the dark or unmanifest side. In terms of initiation this equates to the ‘second birth’, Tiphereth, and ‘third birth’, Kether.[9] In the present context, a withdrawal of manifestation is implied, as at the end of a Great Age.

How many are there which remain in the glory of the earth, which are, and shall not see death until the Fall of the Great House, and the dragon shall sink!

In the 11th of the Enochian Keys, there is reference to the ‘House of Death’, which seems to have identical meaning. This appears to place the Day of Judgement, if we use the Apocalypse frame of reference, literally in the present times. If the precessional wheel of the equinoxes is seen to commence from the house of Leo (some time before the end of the last Ice Age), which was named by the Egyptians the ‘First Time’, then we are now at the Fall of the Great House, which is Aquarius.

“Him that is, was, and shall be crowned” is a reference to the Lord and Master of Time, for example Christ and Shiva—for both these bear the symbols of the key of eternity and the sceptre of time, three-fold (past, present and future). The division of the “crown of the temple” is the division of the earth from all spiritual influence during the reign of Antichrist. The division of the robe seems to be a direct allusion to the Romans, who divided up the robe of Jesus to sell, before his crucifixion. Thus our world is sold into slavery and condemned to hell through rejection of the Truth and the denial of all spiritual possibilities. The ‘robe of Christ’ is his resurrection garment or body, which is to say, the possibility by which a soul may enter the ‘kingdom of heaven’.

Come forth, appear to the terror of the earthbound, and to our joy, and to those who in thy knowledge are prepared!

It is now revealed that those who remained “in the glory of the earth” are in fact earthbound, which is to say they will not rise again—for these, death is finality. The Angels of Truth and Justice, appearing at the end of time, will seem terrible to the wicked, but are a wonder and joy to those that have retained spiritual realisation.

1. There are four tablets of Enochian letters and spirit names corresponding to each of the classical elements, and each of these is divided into four subquadrants of lesser elements: Air of Air, Water of Air, Earth of Air and Fire of Air, for example. There is also a Black Cross or Spirit Tablet (in the Golden Dawn scheme) that binds them all together. There are 91 Genii or Governors that determine which of the Thirty Aethyrs or Aires is invoked when the one Key that calls them is sounded.

Enochian Keys to the Apocalypse is abridged from Nu Hermetica.
© Oliver St. John 2021