The Ritual of Stella Sophia utilises the Unicursal Hexagram. It is an adaptation of the Lesser Ritual of the Hexagram, as suitable for practitioners of Esoteric Thelema. It can be incorporated into the daily practice, used as a ‘stand-alone’ ritual or as an additional component to existing rituals of the Order. 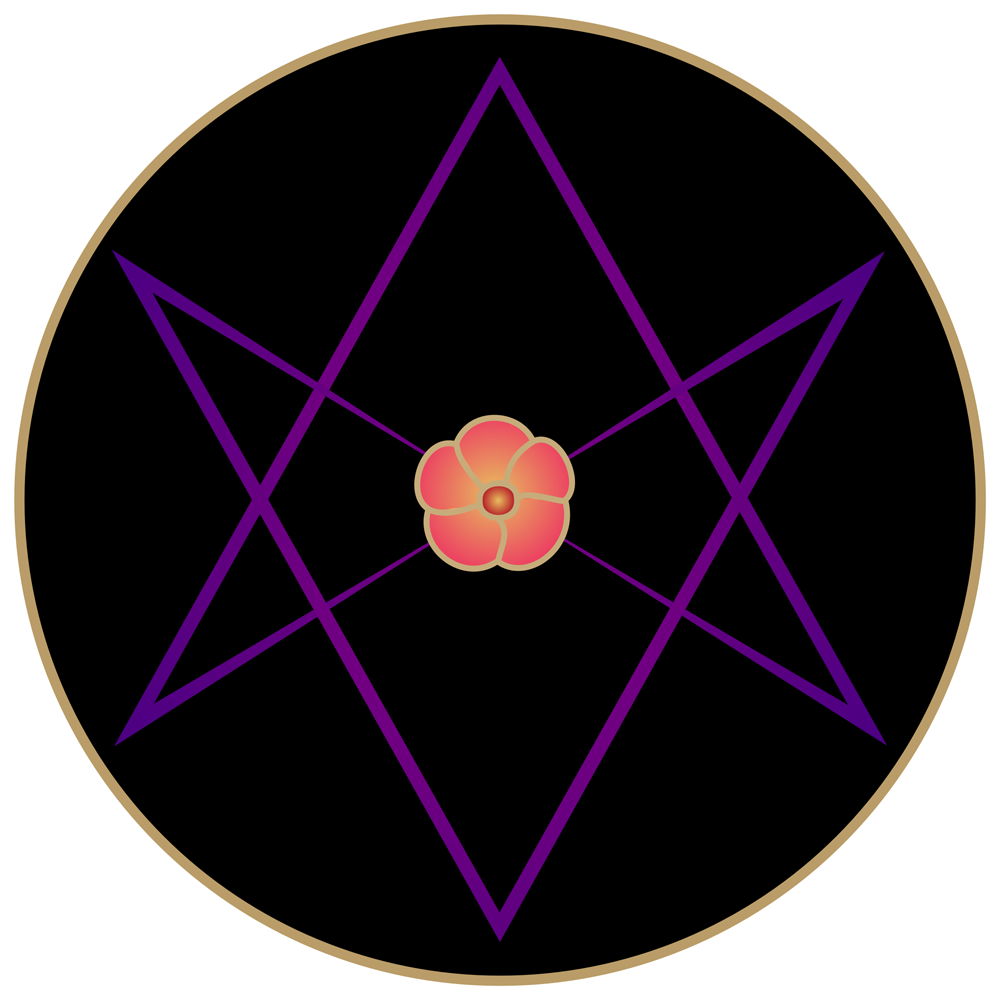 1. Make the (invoking) Unicursal Hexagram to the North in violet-purple. Bring the point of the wand to the centre and vibrate: HT KA PTH!

2. Turning (or proceeding) widdershins, make the (invoking) Unicursal Hexagram to the East in violet-purple. Bring the point of the wand to the centre and vibrate: HT KA PTH!

3. Turning (or proceeding) widdershins, make the (invoking) Unicursal Hexagram to the South in violet-purple. Bring the point of the wand to the centre and vibrate: HT KA PTH!

4. Turning (or proceeding) widdershins, make the (invoking) Unicursal Hexagram to the West in violet-purple. Bring the point of the wand to the centre and vibrate: HT KA PTH!

Bathe me in thy starlight rays,
Unburden my soul: open the ways!

Make the mudra of the Lord of the Stars and say,

6. Clasp your hands together at your breast and concentrate the invoked force in the Tiphereth. Say,

Go forth into any of the three worlds, as you are able.

This ritual is for Wisdom and Understanding. It is exclusively reserved for those who ardently desire to know truth. All else should beware! While the performance of any ritual does not in itself convey knowledge, it is by words and images that all powers are invoked and reinvoked.[3]

The Ritual of Stella Sophia generally invokes the forces of the Macrocosm. It is therefore best done following the Order’s Lesser Ritual of the Pentagram, Gates of Babalon or Ritual of Aiwass—in which case it is not necessary to perform the Cube of Space, as that has already been done.[4] 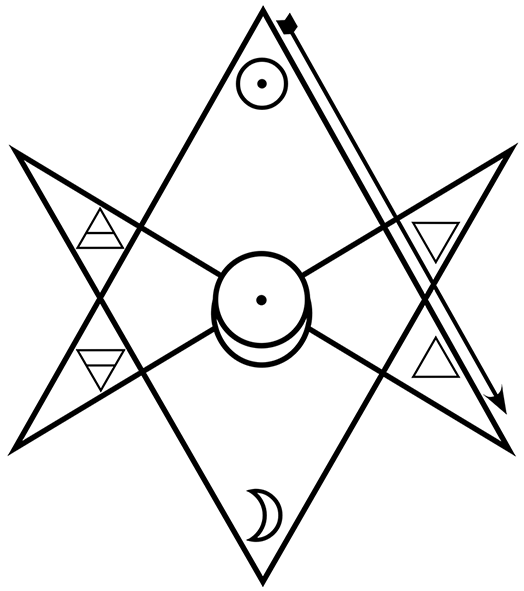 The Unicursal Hexagram has sometimes been confused with the planetary hexagrams of the Greater Ritual of the Hexagram. The Unicursal Hexagram denotes the Moon and Sun as the governance of Spirit acting upon the Zodiac through the four classical elements of nature.[5] As such, it is a fitting geometric means by which to adore Nuit. The ritual also tends to nullify all malefic planetary configurations.

HT KA PTH is pronounced hwt ka ptah. It is an Egyptian name for the land of Khem. It is sent forth powerfully here to the four directions about the magical circle. Thus, “I have made a secret door, into the house of Ra and Tum, of Khephra and Ahathoor”.[6] HT KA PTH means, ‘House of the Ka of Ptah’, and refers to the cult centre known as Memphis.[7] Inebu Hedj (‘White Walls’), as the Egyptians knew it, was the first nome of Egypt. The modern name is derived from the Greek rendition, Aιγυπτoς (Egyptos). The Greek name of Memphis is derived from the Egyptian Men-nefar, meaning ‘Beautiful Forever’. Other names of Memphis include Djed Sut, ‘Eternal Abodes’, and Ankh Tawy, ‘Life of the Two Lands’. The hieroglyphs for Djed Sut are graphically descriptive.

HT KA PTAH has the value of 128 and can be found in The Flaming Sword Sepher Sephiroth under that number.[8] All the entries there are cognate with the intention of the ritual. The number 128 is expressed by 27 (or 2 to the power of 7), ‘Wisdom manifested by Sepet or Set’. Sepet is figured in Djed Sut, the Egyptian name of Memphis. The pyramid also refers to Sirius, the star of Egypt and of the Order. According to AL, I: 28,

None, breathed the light, faint and faery, of the stars, and two.

HT KA PTAH is vibrated four times in the ritual, giving a value of 512 in all. The number 512 is the product of 8 x 8 x 8 and was revered by the Gnostics as indicative of the Master or Way-shower. It is also a cipher for Hermes Trismegistus or Thrice Greatest Hermes. In this way, a secret door into the ‘house’, the Temple of Egyptian Mind, is formed. Nuit will open the door for those so chosen.

The three worlds mentioned at the close are heaven, earth and the underworld (Egyptian duät). All three are dangerous for the non-initiate. Initiates are tested according to their means. Heaven is guarded by the Lord of Initiation. He exacts a severe penalty on those who would ‘take heaven by storm’. The underworld is guarded by the Hound of Hell. He will allow souls to enter but will not let them escape. The terrestrial world is no less perilous. We can recollect the words of Aiwass conveyed in the (Egyptian) Book of the Law, Liber AL I: 31 and II: 21,

For these fools of men and their woes care not thou at all! They feel little; what is, is balanced by weak joys; but ye are my chosen ones.

… this is the law of the strong: this is our law and the joy of the world.

Igne Natura Renovatur Integra—the joy of the world! To be unconcerned with those who have fallen does not imply indifference to the world, for we are called to be participants in her restoration. Those who love life, love liberty, and are prepared to do battle against the enemies of truth. To love truth and seek her ever means living dangerously. It is better to hate the evil that would deny truth, for evil would persuade us to betray her.

1. The Cube of Space is a series of ritual gestures made at the start and finish of the Lesser Ritual of the Pentagram and Gates of Babalon. The other mudras are given in the grade curriculum of the Order, Ritual Magick—Initiation of the Star and Snake. The three mudras given in point 5 are those of the Adeptus, which replace the old ‘signs of LVX’, and the mistaken Osirian formula of INRI used by the historical Order of the Golden Dawn, and also given in Crowley’s general instructions on magick.
2. ‘All of Nature is Renewed and Perfected through Fire’.
3. A person that habitually adopts the attitude symbolised by the Seven of Swords of Tarot may succeed in a self-undoing they had not bargained for, for example.
4. The Ritual of Aiwass is taught to members in the first degree (1 = 10).
5. The disposition of the four elements on this star is identical to that of the pentagram, and the Terrestrial Watchtowers of the Enochian system. For example, begin from the point of fire to invoke the zodiacal triplicity of Aries, Leo and Sagittarius in the 12-lettered name OIP TEAA PDOKE.
6. Liber AL, III: 38.
7. Aiwass, who delivered to us the (Egyptian) Book of the Law, was the high priest of Memphis, or Djed Sut, at a time when it was the principle administrative centre of Egypt.
8. The Flaming Sword Sepher Sephiroth, in two volumes [Ordo Astri].