The Egyptian Tarot of Thelema trump for the 20th path of Virgo is Isis IX. Mercury, the Stellar Light, is the ruler of the sign of Virgo and is exalted therein. 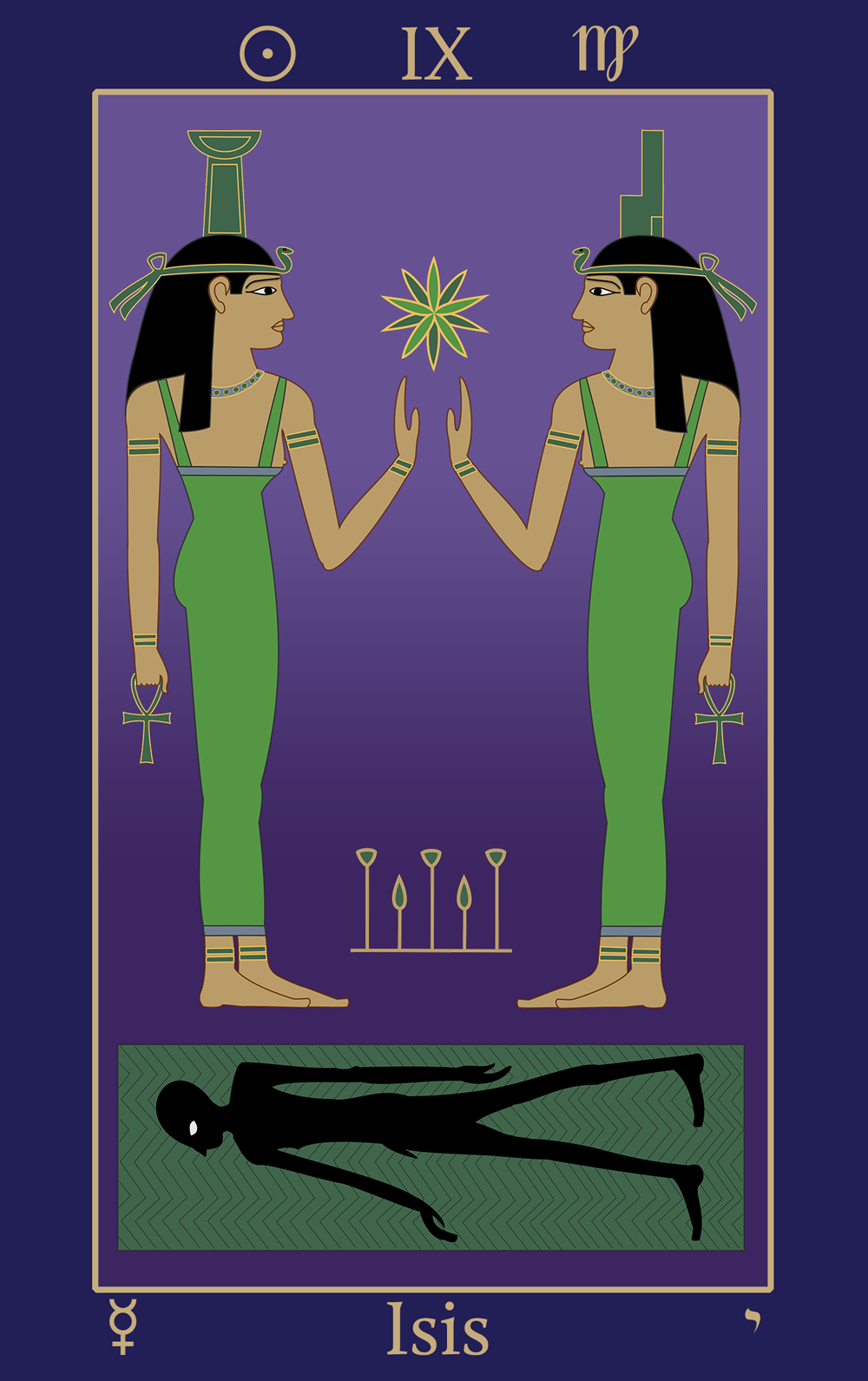 The trump depicts the twin sisters Isis and Nephthys giving life to the inert soul, suspended in the watery abyss called Aukert.[1] By dual manifestation the spiritual powers of the soul create the star or Khabs in the Khu. The twin sisters are placed in the Garden of Eden, which was at one time manifested on the earth as the gardens surrounding the Temple of Neïth in the Delta region, the House of the Lady of Sàis.

The image at the same time depicts the legend of Isis as recorded by Herodotus, when she raised Horus to life after he was poisoned by Set in the form of a scorpion. The card thus depicts Parthenogenesis, Invisibility and Initiation, the three magical powers of the 20th path. These were reflected in the staff, cloak and lamp of the traditional Tarot designs.

The twin sisters Isis and Nephthys are depicted in the centre of the Tarot picture. We know them from their Greek names but the Egyptians knew them as Iset and Nebhet. Their names literally mean ‘Throne’ and ‘Lady of the House’. The hieroglyphs for these form the crowns of the goddesses. They both wear a fillet, tied at the back, and from the front the erect cobra serpent protrudes over their brows. The uraeus is the royal emblem and symbol of the Occult Force or Kundalini, the power of divinity and of life.

Isis and Nephthys mirror each other here, so while Isis salutes with her right hand, Nephthys salutes with her left. In the other hand each bears the Ankh of Life. The Golden Dawn scheme is resumed in this image, where Isis forms a waxing lunar crescent on the right hand side of the Tree of Life and Nephthys forms a waning lunar crescent on the left hand side. Together they are the forces of manifestation and life, symbolised as the dual serpents entwined about the Caduceus staff of Mercury or Tahuti, the word-bird and Logos.

Isis and the Garden of Eden

Between Isis and Nephthys is the hieroglyph for ‘Garden of the North’, the Delta region. The same was used in descriptions of the Temple of Neïth at Sàis (Egyptian Sait), which was originally surrounded by sumptuous gardens and waterways, and among these the royal bee hives. The honey of the bee is the food of immortality. The bee symbol is inseparable from that of the honeyed fields of Sekhet A’aret, the gardens of paradise or Fields of Eleusis.

Beneath the feet of the twin sisters is Aukert, the region of the underworld where the soul is neither truly dead nor alive, suspended in a watery abyss. The gift of Isis and Nephthys blooms above. It is the awakening to life of a star born from the divine power of imagining. The star is composed of superimposed upright and averse pentagrams forming a flower of ten petals in all. The sum of the star plus the point in the centre makes eleven, the number of initiation and of all those who follow Nuit.[2]

The Hermit is the traditional title of this Tarot card, typifying the sage that wanders alone through desolate, abandoned places in search of the truth, or of God. The legends of Isis include her hiding in the Delta swamps to give birth to the divine child Horus. While she is out searching for food, Set assumes the form of a scorpion and stings Horus to death. Her sister Nephthys then cries out to heaven and stops the sun boat of Ra in its tracks. The momentary cessation of time enables Tahuti to whisper in the ear of Isis the spell (‘moment of time’) that will resurrect Horus to immortal life. The tale has multiple levels of meaning; the soul must be receptive to wisdom, a word must be heard. In the same story Isis commands seven scorpions to bow down their heads that she may pass. They are obedient to her command because she is Isis—they belong to her.[3] The moral is that the practitioner must be obedient to the path. The Setian Ass or human ego must be willingly sacrificed to the Great Work, otherwise initiation, resurrection to new life, is impossible. The account given by Herodotus ends with the exhortation, “And these words are true and a million times true”. A true word must be heard ere it can be uttered. Thus the esoteric title of the Tarot trump for Virgo is Prophet of the Eternal: Magus of the Voice of Power, for there is close affinity between Isis and Tahuti (or Thoth).

Egyptological descriptions of Isis focus on the Middle and Late Kingdom mysteries, when many Greeks and then Romans became followers of the cult of Isis. By that time Isis was wedded with Osiris, the Lord of the Dead. With her twin sister, she was seen as the type of the funerary mourner, whose vocalised ululuations led the soul of the dead along the processional route. The tale of Isis giving birth to Horus noted above dates from the same time, for originally Horus was the child of Hathoor. The same sources give the 5th and 6th Dynasties as the time of the first known reference to Isis, or Iset as she is properly known. She is named in the Pyramid Texts, and we know that these in all probability originate from a time far more ancient even than that of the 5th Dynasty. ‘Throne’, her name, has provoked some amusing scholarly speculation. The explanation is simply that Isis is the Foundation of the Universe, the ‘Throne in the Beginning’. Our translation of Spell 78 from the Book of Coming Forth includes this.[4]

Open thou the ways, that I may return through the wheels of thy spinning, that have established the throne of my becoming; that was my seat before my beginning!

The Iset ‘throne’ hieroglyph nearly always depicts a rectangular or square insert on the base of the seat. This declares the phi ratio or Golden Mean, the foundation of the visible universe that is also descriptive of geometric forms such as the pentagram and spiral. Ancient architecture frequently incorporates the Golden Mean in its proportions. Qabalistically, Binah (‘Understanding’) is the completion of the supernal triad, the geometric foundation of form, and is often personified as Isis. The corresponding name in the world of Yetzirah (‘Foundation’) is Aralim, ‘Thrones’, the Foundation of Understanding. As Isis is also the principle of love, we are reminded that there is no understanding without love, and that love and wisdom are therefore inseparable terms. The literal meaning of philosophy is ‘love of wisdom’—would that it was the norm and not the exception!

Nebhet, the sister of Iset, also wears her name for her crown, ‘Lady of the House’. This is formed from the neb, a bowl or basket, placed upon the het symbol for ‘house’, a rectangular enclosure. The house, temple, shrine or abode thus rests on the foundations of the universe, expressed through the proportions of the phi ratio. It is then the ‘House of God’, the chakra, star or flower that is the abode for the indwelling Soul of the Eternal.

The position of the 20th path of Virgo on the Tree of Life extends from the azure sphere of Gedulah (Jupiter) to the golden blaze of Tiphereth (the Sun). Gedulah is the natural sephira for both Isis and Ma’at, the law of love under will. In Tiphereth, the Magnificent Fountains flow forth to irrigate the radiant gardens of Eden.

The path is called the Intelligence of Will. The yod, bindu, flame or seed-star that is the letter of the 20th path is, in the absolute sense, Hadit, the giver of Life, the animator of all things that live and move and have their being. Hadit is Mercury in the highest, or most simple, abstract form. Mercury is the planetary ruler of the astrological sign. Virgo is unique in the Zodiac in that Mercury rules her sign and is also exalted therein. The Intelligence of Will is the stream of light or intelligence forming the innermost structures of mind or intellect in man. It is called thus “because it forms all patterns, and to know this Intelligence is to know the whole reality of the Primordial Wisdom.” The knowledge of the spiritual Will constitutes the full realisation of the cosmic purpose or meaning in all things. On this path arises the possibility of knowing and doing the True Will, as it is termed in the cults of Thelema.[5]

The letter yod of this path is the feminine essence—the “creative force that arises in pure darkness” of the 15th path. The ‘seed’ or bindu is thus conveyed to the matrix to form the Khu, spirit or Holy Ghost. The descent of this path brings the recollection of cosmic memory into the full knowledge and realisation of Tiphereth, while the ascent of the path is to immerse one’s own life’s blood or energy into the cup of the Holy Graal. All solitary creatures are traditionally assigned to this path, yet the Initiate of the path must illumine the path for others.

The mystic number of the path is 210, an indication of the mystery of NOX or Night, otherwise personified as Lilith or Lilah. The trinity of the number is summed up in the staff, lamp and cloak of the hermit traditionally assigned to this path. The staff is the energy, the Occult Force, which must be applied with strict vigilance and economy of means towards the Great Work. The lamp is a metaphor for the Occult Light, which the Initiate necessarily veils from the world. The cloak of invisibility is the silent means of transmission of the secret Word of the True Will. Hence the magical powers of the 20th path include Invisibility, Parthenogenesis and Initiation. The zodiacal sign of Virgo is naturally associated with Isis as the virgin mother. In very ancient times, before the cult of Osiris held sway, Nuit and Hathoor gave birth to a divine child by parthenogenesis, which is to say, without paternal intervention. The child is the sun-star and Hadit or Set is the ‘child’—the mysterious power that manifests the star, which is the appearance of Nuit-Isis.

1. The ‘watery abyss’, Aukert, is the region of the unawakened dead. The same is also depicted as a lake of fire. Bika Reed has compared this with the alchemical symbolism of the bath or vessel that is heated by a furnace. “The flood of man’s despair has drowned him. The heat of his own rebellion has destroyed him. Fish feed on him in shallow water.” See Rebel in the Soul—a sacred text of ancient Egypt, Bika Reed, pp. 119 [Inner Traditions International, 1978].

3. Selqet, the Scorpion goddess, is closely linked to Isis. To the Egyptians, the scorpion was not only a symbol of death but also a symbol of life-giving breath or spirit.

4. Pp. 136–145, Babalon Unveiled! Thelemic Monographs [Ordo Astri]. The Book of Coming Forth into Light is called by Egyptologists the ‘Book of the Dead’, a name that was originally afforded it by tomb robbers.

5. A commentary on the wisdom texts of the Sepher Yetzirah is provided in The Flaming Sword Sepher Sephiroth [Ordo Astri].