The Egyptian Tarot of Thelema trump for the 16th path of Taurus is Hathoor V. Venus, the Egyptian Hathoor, is the ruler of Taurus, while the Moon, the Lunar Flame, is exalted therein. The traditional title of the trump is ‘The Hierophant’ or ‘Pope’. 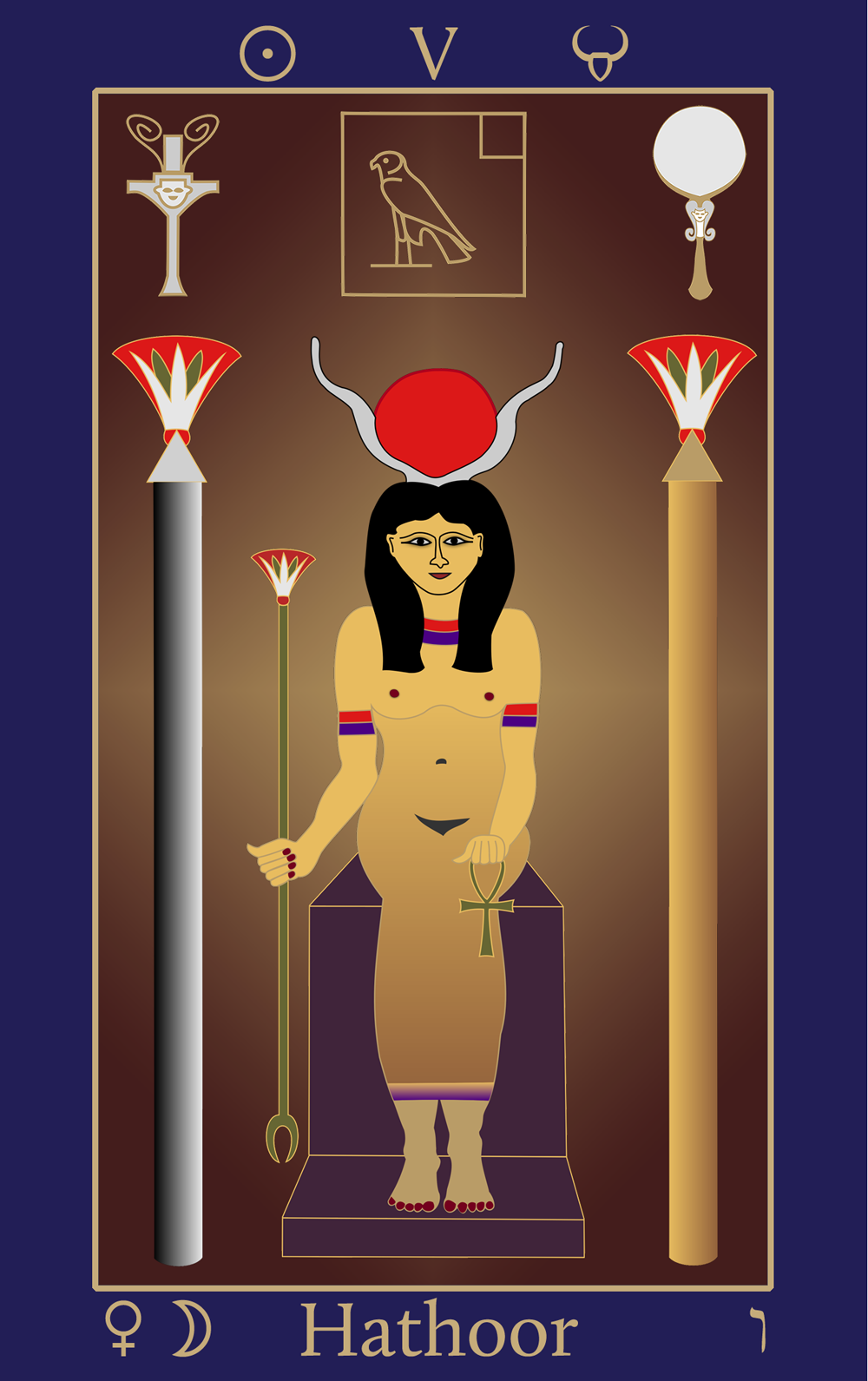 The name of Hathoor, as given in the (Egyptian) Book of the Law, is derived from Het-Hor, literally, ‘House of Horus’.[1] The esoteric title of the Tarot trump is The Magus of the Eternal.

In the centre of the Tarot picture is Hathoor, seated on a cubical throne, for Taurus is the Foundation of the Earth. The throne is deep indigo, the colour of the 16th path in the Queen Scale. It is placed between two pillars of silver and gold. Lotus flowers surmount the tetrahedronal capitals. Hathoor is crowned with the solar disc and lunar cow horns. She bears the lotus wand in her right hand, symbol of the perfume of immortality, and in her left she bears the Rosy Cross of Life and Love. She is naked but for a translucent garment worn on the lower half of her body and legs. Her ornaments are a collar and armbands of red-orange and indigo, which is nature’s fourth primary colour.[2] She is the Scarlet Woman of the Book of the Law, and the soul of the world. She is Venus, the goddess of Love under will, and the ruling star of Taurus, the Bull of Earth.

The Egyptian hieroglyphic name of Het-Hor is at the top of the Tarot picture. It is the simplest and most elegant expression of Hathoor’s name, the ‘house’ with the Horus falcon within. On either side are the symbols of Hathoor, her mirror and her sistrum rattle. The nature of the Moon, as with the human psyche, is cathodic, reflective. The world is the mirror of the soul; Venus appears to us as a star in the morning or evening by virtue of the fact that she reflects the rays of the sun, as does the Moon and other planets. The sistrum rattle is the emblem of music and dance, and is at the same time the sharp call to attention, to ‘wake up’!

As Magus of the Eternal, Hathoor is the will to love. As stated in the oracle of Nuit, Liber AL vel Legis, I: 57,

Invoke me under my stars! Love is the law, love under will.

The Word of Hathoor is the phallic image, the solar power of Horus, her sun-star, born by divine parthenogenesis. Thus by esoteric will, Nuit is manifested upon the earth, clothed in form. The word is thus veiled in flesh. In older depictions of the Tarot trump, the Hierophant or Magus of the Eternal is shown as a pope or mysterious patriarch, or otherwise masked. When man seizes the power of the phallic image for himself, he evokes the false crown of the Abyss. He is thus enslaved by that power and it matters not whether the slave calls his master Satan, God, Religion, Fate or Science. The goddess of truth and beauty will reveal nothing and mean nothing to those who do not seek her only, and with a pure heart. Thus she looks serenely and steadily straight back at the observer of the Tarot picture. As declared in Liber AL, I: 60,

But to love me is better than all things: if under the night-stars in the desert thou presently burnest mine incense before me, invoking me with a pure heart, and the Serpent flame therein, thou shalt come a little to lie in my bosom.

The astroglyphs for the Sun and Taurus are shown on the border at the top of the card. On the lower edge of the card are the astroglyphs for Venus, the ruling planet of Taurus, and the Moon, who achieves her exaltation therein. Vav, the letter of the 16th path, is to the right of the title. The Roman ‘V’ numeral is the letter-shape and number ‘5’ of the pentagram. The pentagram is expressive of the phi ratio or Golden Mean, symbol of the foundation of all creation. The Golden Mean is used in sacred architecture and forms part of the Egyptian hieroglyph for the ‘throne’. The planet Venus was anciently associated with the pentagram. Her conjunctions with the sun, as viewed from the earth, form two pentagrams, aright and averse. The apple, a Venusian symbol, is cognate with the Garden of Eden, which is the Tree of Eternity, and Hathoor the indwelling soul. When the ‘five’ is added to the ‘six’ of the phallic image, the vav, the result is 11, the number of Magick and of Knowledge, and of all those who follow Nuit. As according to Liber AL, I: 60,

My number is 11, as all their numbers who are of us.

Maga of the Eternal

The 16th path of Vav connects Sophia or Chokmah, the sphere of the Zodiac, with Chesed the magnificent or glorious sphere of Jupiter.[3] The path is called the Triumphant or Eternal Intelligence, since it is the way of return to the Garden of Eden. The descent of the path is aptly figured in the letter vav, where the creative seed or essential fire is carried downwards towards manifestation. The letter’s name means ‘a nail’ or ‘pin’; it symbolises the power of fixing an image in consciousness, an act of will on the level of pure mind. The power of imagining is an attribute of Venus, the Egyptian Hathoor. The lunar nature of this path is to reflect the dark radiance pouring forth from the Ain Soph into the pool of cosmic memory in Chesed, the sphere of Jupiter.

The magical power of the 16th path is traditionally the Secret of Physical Strength. The secret bears no relation to athleticism, for it is the knowledge of that which animates all things that live and move and have their being—it is no less than the secret of life itself. The power may thus be construed as the Vitality of the Ka. It is Hathoor’s Word, the Serpent Hadit, who gives this life.

1. According to Liber AL, III: 38, the Song of the Stele, “I have made a secret door into the House of Ra and Tum, of Khephra and of Ahathoor”. This is a rare variant spelling of Hathoor’s name; we have adopted the spelling more commonly found in the works of the Golden Dawn and Crowley, based on transliteration from Coptic.

2. See ‘Ultraviolet Light of Set-Typhon’, Babalon Unveiled! Thelemic Monographs, for an explanation of the ‘miraculous intervention’ of indigo, when considered as a primary colour.