What is this Star? The (Egyptian) Book of the Law has a complete metaphysics but the Law is “Written and Concealed” (III: 75). The first and only time that Aiwass makes a direct statement in his own name is in verses I: 7–8, where he declares, “The Khabs is in the Khu, not the Khu in the Khabs”. He has named himself as the “minister of Hoor-paar-kraat”, which is broadly speaking the God of Silence or of meditation. This is be understood as the ‘pure consciousness’—of which more will be explained later. The God, often shown emerging from a lotus flower, is easily comparable with early depictions of the Buddha and also of Shiva. As a prince and priest (literally), Aiwass was entitled to wear the forelock of Harpocrates; however, in this case we are dealing with one that far exceeded the fulfilment of a mere office or official function. To approach further understanding of all this we need to know something about the Egyptian Khabs and Khu. 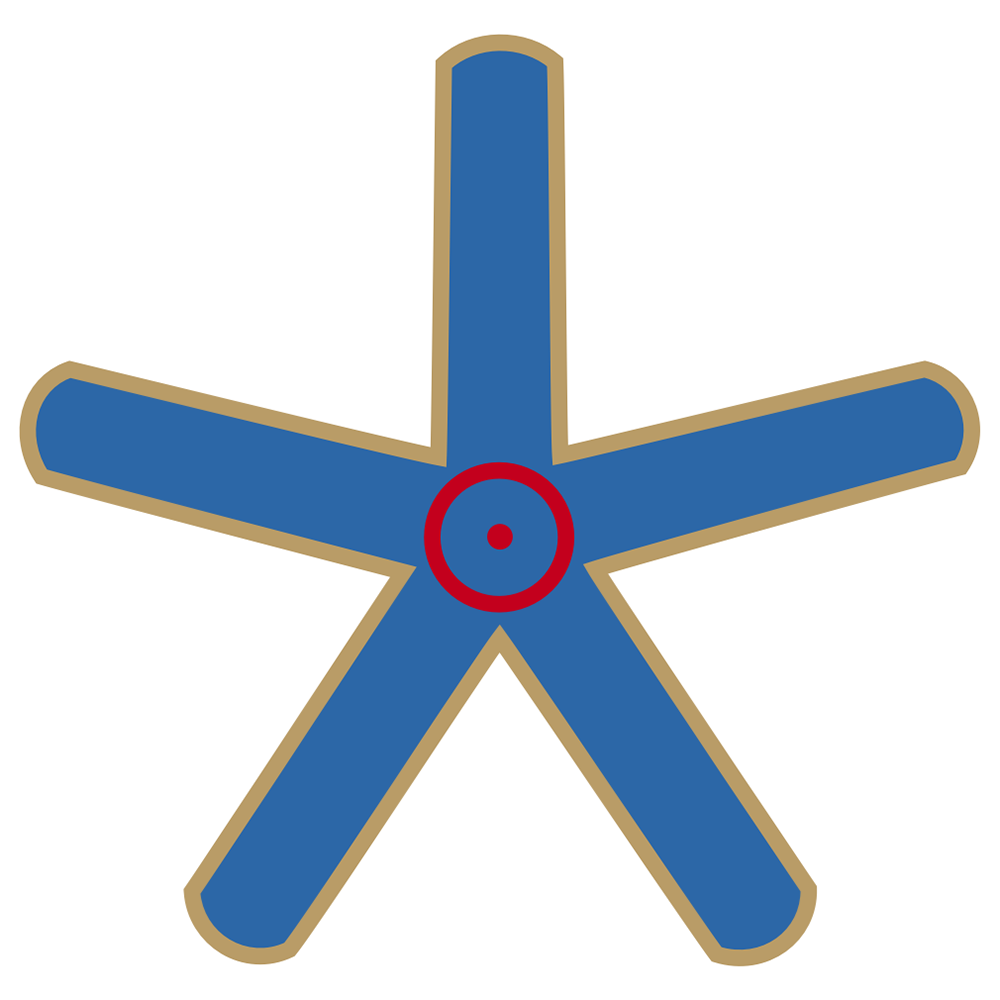 The Khabs is actually a threefold symbol, as written everywhere upon stone and papyrus. It consists of a five-fingered or five-rayed star, which is sometimes called the ‘Hand of Orion’ (Sahu). It is described in the Book of the Law, I: 60, as blue and gold, five-pointed with a red circle in the middle. Stars exactly as described there adorn the walls and ceiling of Egyptian temples such as the Temple of Hathoor at Iunet (Denderah).[1] Within the radials is a small circle, and within that is the point or primordial centre. From the centre, the radiations form the circumference of the circle of all possibilities, and so these possibilities exist as latent in the centre.

The same circle and point is used to symbolise the Sun, but equally it is used to symbolise the ‘Sun behind the Sun’, or Kether in the Qabalistic schema. The latter is the Supreme Centre, the primordial fount of all wisdom, while the former is the secondary solar centre, or Tiphereth. The Khu is the principle of radiance as applied to the transcendent individuality. As a ‘resurrection body’, the means of return to the source, it is symbolised by a phoenix, ibis, heron or other kind of bird.[2] The Khabs or ‘star’ also shows the principle of radiance, and radiance is naturally contained within the circle about the point, whose rays form the circumference.

The Star as Door to the Centre

The Khabs does not symbolise a star as such, which is called seba, but is a type of opening or doorway to the timeless ‘hollow’ at the centre of all, sometimes depicted in various traditions as a heart, vessel or graal.[3] The Khabs is nonetheless the principle of a ‘body’, ‘house’ or ‘abode’, and is called in the Book of the Law, II: 2, the ‘House of Hadit’—that is, the abode of the principial point.

I, Hadit, am the complement of Nu, my bride. I am not extended, and Khabs is the name of my House.

From the terrestrial or corporeal point of view, the ‘Khu is in the Khabs’, and corresponds to the tantrik Shakti, depicted as a serpent coiled at the base of the spine in the subtle anatomy, dreaming the world illusion until awakened through yoga and other practices. The Occult Force or Kundalini is not actually located in the body as such, for it is a reflection of the primordial and cannot be contained. It therefore only appears so owing to the fallen state or what is called in Vedanta, ‘ignorance’.[4] The doctrine revealed by Aiwass is therefore the higher or initiated teaching.

The ‘extension’ of Hadit takes place through the two-way door of the Khabs. Outside or below that, he manifests as the Serpent of Knowledge whose abode is the Tree of Death, which is also the abode of man in the fallen state. Thus the Khabs itself has a dual aspect, above and below, or within and without—and with initiation, the point of view reverses. The Khabs is in the Khu from the supra-human or post-Abysmal point of view. 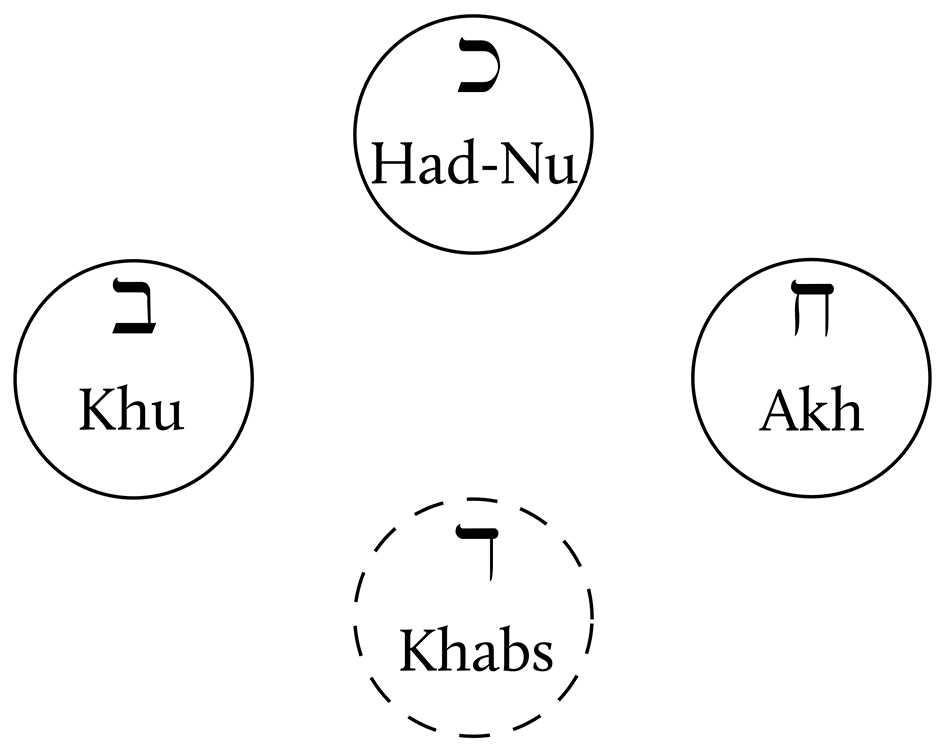 This can best be understood if we use the Qabalistic schema as shown to the left here. The Khabs star is here identified with Da’ath, for it acts as the means by which Hadit projects the appearance of things, Nuit’s manifestation, as measured (and eventually quantified) in the Abyss of man’s consciousness.[5] It is at the same time the means of return to the primordial state; thus Nuit instructs in the Book of the Law, I: 9,

According to traditional Qabalistic texts, Da’ath is hidden in the secret places of Binah, the primordial Mother and feminine aspect of Set-Typhon. Seen this way, the Khu cannot be in the Khabs, for the lesser cannot contain the greater or superior. The Khabs is here the emanation of the Khu, Nuit’s “company of heaven” projecting into time and space.[6]

To complete the metaphysical basis it is necessary to place the Egyptian Akh principle in Chokmah. Akh, like Khu, is ‘radiance’, but whereas the Khu tends towards form, the Akh tends towards essence, the primordial or immortal state. This is shown by the word ‘Akh’ itself, which is the reverse of Khu and is formless, as is the principle of ‘will’ or ‘ordinance’—which is a further meaning of Akh.

We can now see why the threefold Khabs is sometimes called the ‘hand of Orion’, the giant constellation or ‘sky-strider’, which has great importance in the ancient Egyptian schema. Every king was identified with Sahu or Orion. This was frequently depicted by an anthropomorphic figure of a God or a man with his left foot forward and one arm flung back over the shoulder, bearing what is frequently misconstrued as a ‘flail’. This, combined with what is nearly always mistaken for a ‘crook’ became one of the most important symbols of both Gods and kings.[7] The nekhakha (‘emanation’) and hekat (‘hook’) are another type of the Khu and Khabs. Nekhakha, the triune Sophia or Khabs, is the means of the creation of a new state of being; hekat is the power of ordinance or ‘activity’ in the inner or spiritual sense.

Thus, the “servants of the star and snake”, as it is put in the Book of the Law, II: 21, are those who serve only the primordial reality of Nuit and her Star, to whom the ‘snake’ must arise. Their sole purpose is that of initiation. This is accomplished, in the highest degree, through an ascending and descending realisation.[8] For the ‘descent’ to be perfect, the realisation must be to the fourth state, beyond even the ‘third birth’, and in which, to use the Sanskrit term, the dual soul of Brahma is known. This fourth state, according to Guénon, must have been known by Shankara as it is in the texts he was commenting on, but he would say nothing about it.[9]

In this respect it may be worth noting that the Advaitan turia, the ‘fourth state’ (of consciousness) is equal by Qabalah to the number 226, which is that of Tzaphon, ‘hidden’, ‘profound’ or ‘the north’. The ancient Egyptian word tura is clearly the origin of the Sanskrit term, and means ‘pure’. Terms such as bodhisattva and avatara, as according to various traditions, describe one that has effectively risen beyond even the ‘saints’—for while the saints attain a high degree of initiation it is on their own behalf, whereas the avatars have a special mission that is concerned with assisting others with the Great Work to the very end of time.

The notion of ‘compassion’ that is often used in association with the work of avatars reduces and degrades both their purpose and their function, so that some have supposed an ‘avatar’ to represent a lesser degree of the deliverance or Supreme Realisation, whereas it is in fact of the highest and most complete order. It is not a matter of sentimentality or emotionalism, which again is so often confused when the symbol of the ‘heart’ or vessel (Egyptian ab) is present, but is a matter of divine ordinance.

1. Iunet, which includes a large temple complex north of Waset (Thebes), means approximately, ‘She of the Divine Pillar’ (or ‘pillar of light’). The name relates both to Hathoor as Sky Goddess and the axis of the universe, of which the ‘hub’ or centre of the wheel governs all manifestation, cosmologically speaking. Spiritually speaking, it marks the primordial centre that is the source of all initiatic transmission.
2. Cf. Babalon Unveiled, ‘New Light on Stele 666’, pp. 41–43.
3. The word ‘Khabs’ is actually the reverse of seba, ‘star’, with the addition of the ‘kh’, similar in pronunciation to the Hebrew cheth. Note that the termination, abs, is cognate with both ‘abyss’ or ‘opening’ and the Egyptian ab, ‘heart’ or vessel. Furthermore, seba, as in the case of Khabs, is frequently depicted in hieroglyphs as a bird (‘celestial body’).
4. For example, the Non-Dual or Advaitan teachings of Shankara.
5. ‘Quantification’ occurs near the end of time, at the ending of a great age or manvantara. See Guénon, The Reign of Quantity and the Signs of the Times [Sophia Perennis].
6. Book of the Law, I: 2: “The unveiling of the company of heaven.”
7. See Babalon Unveiled, pp. 229–30.
8. See Guénon, chapter 38, Initiation and Spiritual Realisation [Sophia Perennis].
9. Perhaps for the obvious reason that Advaita is ‘non-dualism’—see pp. 178 [ibid]. However, the ‘dual soul’ of Brahma, being neither manifest nor unmanifest yet partaking of both, has nothing to do with ‘duality’ or ‘dualism’ and is not in any way ‘dualistic’.