The Egyptian Tarot of Thelema trump for the 24th path of Scorpio is Sokar XIII. Mars is the ruler of the sign of Scorpio; Uranus is also given here as Lord of the Kerubic signs. The esoteric title of the trump is Child of the Great Transformers: Lord of the Gates of Death. 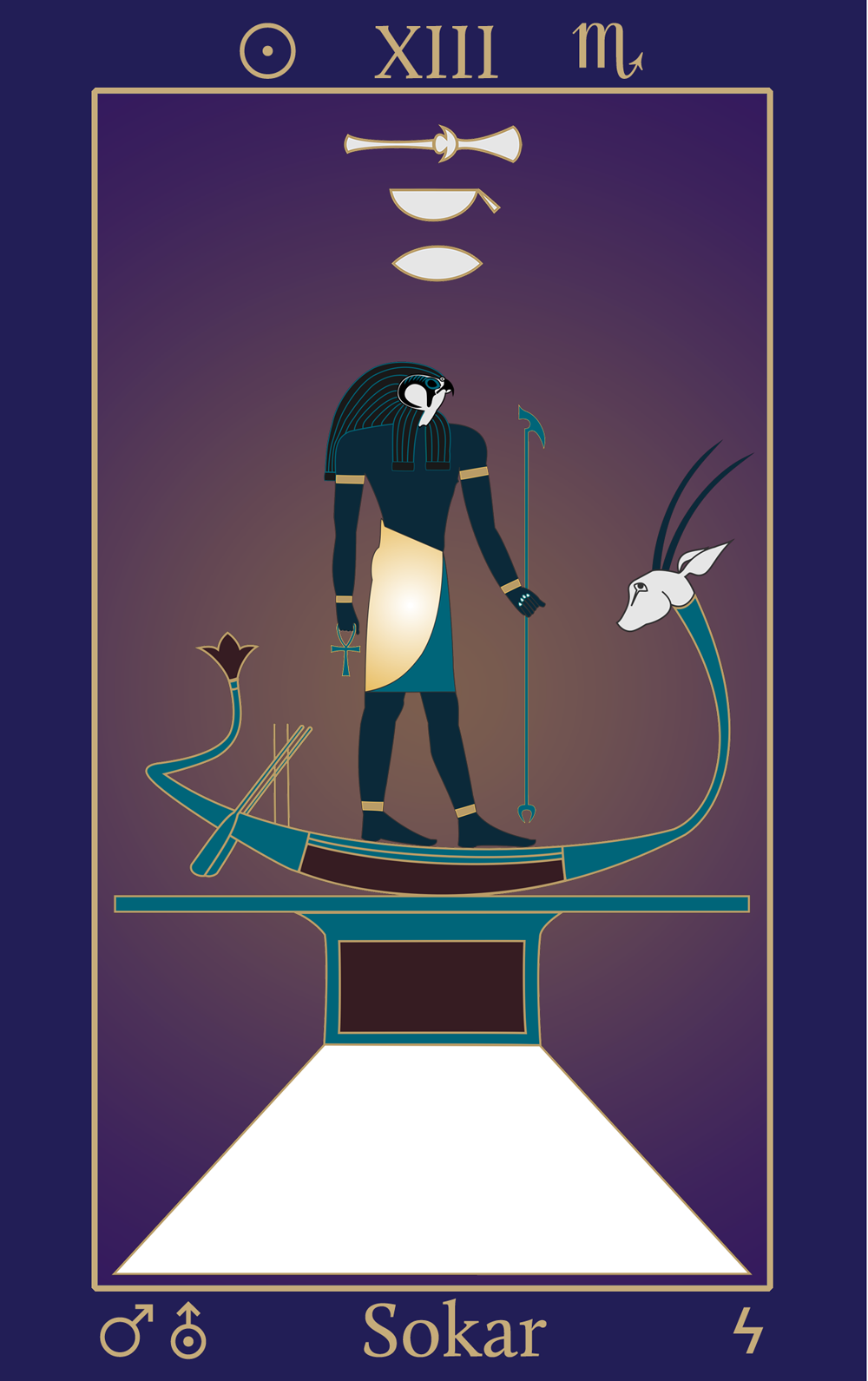 Sokar is here depicted as a hawk-headed god, with black nemmys and white apron. He bears the was or Set-headed sceptre and the Ankh of Life. He is standing upon the hennu boat of the sun’s journey through the night and the underworld. The boat is shaped like a sledge with runners and was never intended to sail on water. It was built to be carried, and was said by some to be steered by the dead. The navigation took place among the stars, for the hennu boat is an astral vessel. The higher end of the sledge is fashioned in the shape of the head of an oryx, a species of desert antelope and the original type of the unicorn.[1] The hennu boat was in the charge of the high priest of Memphis called Ur-kherp-hem, ‘Great One of the Hammer’. The title is a reference to Ptah the cosmic creator god, with whom Sokar was identified.[2]

In the Tarot picture the boat’s runners rest upon an ark, which in turn rests upon the pure white mound of Sokar. Depictions of Sokar in the hennu boat sometimes show his hawk’s head only, while his body is covered in a white, luminous shroud. On the day of the festival of Sokar, the high priest raised up an ark or small wooden shrine at the moment of sunrise and placed it on the hennu boat. The shrine and hennu boat was then pulled along across the sands in a circular procession about the temple of the god, mirroring the revolution of the sun, planets or other celestial bodies.[3]

The fiction writer Algernon Blackwood was able to convey some profound insights into the soul of Egypt, and of the vast expanse of the desert wilderness. In ‘Sand’, his writing was inspired by his experiences of the desert near Cairo.

Through this sand which was the wreck of countless geological ages, rushed life that was terrific and uplifting, too huge to include melancholy, too deep to betray itself in movement. Here was the stillness of eternity. Behind the spread grey masque of apparent death lay stores of accumulated life, ready to break forth at any point. In the Desert he felt himself absolutely royal.

And this contrast of Life, veiling itself in Death, was a contradiction that somehow intoxicated. The Desert exhilaration never left him. He was never alone. A companionship of millions went with him, and he felt the Desert close, as stars are close to one another, or grains of sand.

Power of Scorpio: Will and Word of Sokar

Sokar’s name is spelled in hieroglyphs at the top of the Tarot picture. It means ‘pure word’, or ‘word of power’. According to the (Egyptian) Book of the Law, I: 39,

The word of the Law is Θελημα.

Sokar is sometimes shown adorned with the two plumes of Ma’at surmounting a solar crown. The plumes emphasise the word of Thelema, the True Will. The first hieroglyph of Sokar’s name is the sekhem wand or sceptre of power. The centre of the wand is a stylised form of the horned beast, usually a bull, indicative of the Ka. The Ka is a vital reserve of strength required for the transformation of the soul into the eternally living Khu, the fabled phoenix bird, which in turn reflects the radiance of the ‘star’ or Khabs.

Sokar is called the ‘great god, who came into being in the beginning, he who resteth upon the darkness’. As such he was ancient even when the Pyramids were built, as are his rites. He is also ‘Lord of the gates of the tomb’ as the opener of the sealed entrances to the labyrinthine Necropolis. Sokar is and has always been Lord of the Saqqara Necropolis near Memphis and Giza. In predynastic times, a labyrinth was dug out of the desert sands beneath the Saqqara complex. Finely fashioned, highly polished granite arks weighing upwards of 50 tons were placed in cavities there. The arks or vessels are cathodic, for they are polished like glass on the inside. There are no historical records of the builders of these impossible artefacts but they are thought by some to be the ‘old ones’ or ‘elders’ referred to in sacred texts, or their descendants.

The Great Old Ones is a term used in scriptures referring to an elder race that pre-existed that of the human, indistinguishable from gods. They are referred to in the book of Genesis as Nephilim or ‘giants’, the ‘men of renown’. Between Memphis and the Saqqara Necropolis was once a sacred acacia tree. One of the Egyptian names for Memphis is Ankh-Tawy, ‘Life of the Two Lands’. Thus the Tree of Eternity spreads its roots and branches between the worlds of the living and the dead. However, we should not be too hasty in drawing conclusions as to which world is that of the living and which is that of the dead.

Scorpio and the 24th Path

The 24th path of Scorpio connects Tiphereth, the sphere of the Sun, with Netzach, the sphere of Venus. The letter usually ascribed to the path is Nun, ‘a fish’. We here give the original and much older placement, called nahesh, ‘a snake’, for the three emblems of Scorpio are the Eagle, Snake and Scorpion. Mars is the principle of energy and power, the fire of death that transforms matter and is needed for life. The Sun enters Scorpio in the month of October, which according to the alchemists is the only time when iron can be turned into gold. The 24th path is called the Imaginative Intelligence, or Intelligence of Resemblance, which is to bring about new modes of expression, vehicles for the self. On the way of return, such vehicles are transcended and broken down—thus the full title of the Tarot trump is Child of the Great Transformers: Lord of the Gates of Death. Sokar is first and foremost the Lord of Death and Resurrection, and the immortal principle.

The magical power of the 24th path is that of Necromancy. The rites of tombs, caves and labyrinths have proved to be remarkably enduring if we consider that the cult of Sokar reaches back to predynastic times. Many world traditions include the use of rituals, perfumes and unguents and sometimes skulls or bones to traffic with ancestral spirits. To the ancient Egyptians, the spirits of the dead were always present in the underworld, if not among the living. The word ‘mantic’ is derived from the Greek mantikos, ‘prophecy, divination’. The real secret of the dead is the secret of life itself, declared by Hadit the Serpent of Knowledge in AL, II: 6,

1. The hieroglyphic determinative for ‘oryx’ is frequently mistaken for that of a goat. The Egyptian name is ma’au hetch, denoting the bright white colour of the Arabian species of oryx and the straightness (ma’at) of its horn. The Aramaic re’em is translated in the King James Bible as ‘unicorn’. The same word was translated into Greek as monokeros (μονοκερως) in the Septuagint. In Psalm 22: 21, the word karen, meaning ‘horn’, is written in the singular form. A legend has it that Noah strapped the long, sharp horns of the oryx to the Ark so the animals inside could breathe. The transposition of the tale of Noah’s Ark from that of the exceedingly ancient hennu boat is fairly obvious.

2. Memphis was the location of the temple of Ptah in Lower Egypt, called by the Egyptians, Ankh Tawy, ‘Life of the Two Lands’.

More on the Mystery of Sokar can be read at Tantrika Books here.