The Egyptian Tarot of Thelema trump for the 25th path of Sagittarius is Neïth XIV. Jupiter, the Sapphire Star, is the ruler of Sagittarius. Neptune is also figured as governor of the mutable signs. 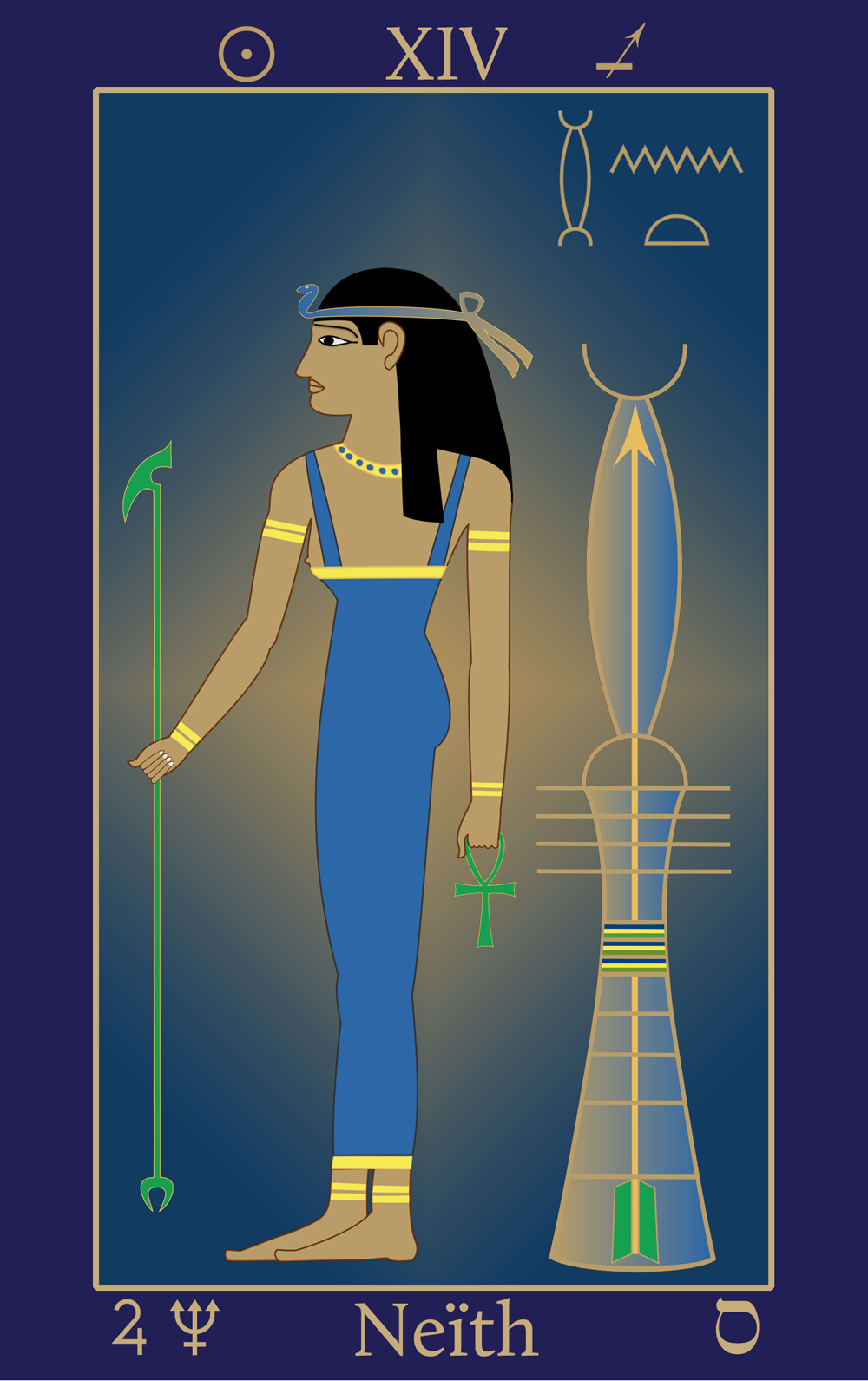 Neïth is depicted here as a young woman clothed in deep blue, with yellow ornaments and trim. She bears a green ankh of life in her left hand and priestly was sceptre or phoenix wand in her right hand. She wears a fillet armed with a serpent. The hieroglyphic name of Neïth is shown at the top right of the Tarot picture. The first letter is net, the ‘shuttle’ determinative. Next comes the hieroglyph for the ‘sky’, identical to that of Nuit. The name is completed with the phonetic ‘t’.[1]

Behind Neïth stands a composite symbol formed from the djed pillar, the shuttle, which spells her name (net), and the Arrow of Sagittarius. The Egyptian djed pillar is the origin of the letter samekh, which defines the 25th path of Sagittarius. The djed bears comparison with the spinal column, especially when that is taken as the subtle channel for spirit-fire in the occult anatomy. It thus signifies spiritual strength and endurance. It is also a type of alchemical retort for the transformation of iron, the dross of experience, into gold, the invisible radiance of spirit.

Neïth was one of the earliest creatrix deities, the weaver of the web of the worlds and the light of the world. She was originally the personification of the waters of the primordial nun, the abyss from which all life issues forth, and which existed even before the birth of Gods such as Ra.[2] As goddess of the crossed arrows, Neïth is the guardian of the Abyss and of all crossroads or thresholds of initiation. The ‘x’ symbol is the primal signature for any place or location. It marks the formless substance or radiance from which all life is created and manifested.[3]

Sagittarius and the House of the Net

The foremost shrine of Neïth was called the ‘House of the Net’ (Net-Het) at Sàis in the Delta. It was here that a great annual festival was held in honour of Neïth and Isis. The festival resembled the rites of Candlemas or Imbolc, the crossquarter of the year between the winter solstice and spring equinox where cakes are made and eaten in honour of the Goddess. Lanterns are kept alight all night and carried in processions coinciding with the full Moon.

According to Herodotus, curious rites were performed in Sàis near a row of ancient monoliths. A small shrine was hollowed out below the ground and covered with an ornately carved stone slab. The walls of the shrine were also decorated with fantastic carving. From the account given by Herodotus it is certain that the shrine was used for night-long vigils for the purpose of initiation. No one would be allowed to enter or leave until the morning, by which time the person thus prepared would have encountered their Daemon, or perhaps even Neïth.[4]

Neïth was called the ‘House of the Net’ from earliest times. The root of the name ‘Net’ is phonetically identical to the name for any god or natural principle, neter, and is thought to refer to spinning or weaving. As Binah, Neïth is the matrix for the word or Logos. The Net has a dual meaning. On the one hand it is composed of the subtle threads of the matrix of existence. Knowledge of the space-marks, as named in Liber AL, I: 52, opens the ways to the pathways of light that lead out of and beyond the underworld.

We are warned here concerning the misguided philosophical notion of ‘one’, for it leads to belief in an Isolate Intelligence or supreme separate self. Those who believe in this ‘one supreme’ become ensnared in an evil net or web of self-confinement. Such souls have chosen unwisely. They are unable to hear the words of Isis. Unless a word is heard, as demonstrated in the legends of Ra and Isis, the soul cannot resurrect. Self-identification leads the soul to become detained in the underworld until dispersion ensues. Whereas the soul gains substance in the dissolution of ego, she faces annihilation if the ego should finally baulk the appointed rôle of the ass that carries the ark. The sacrifice is made willingly or not at all.

Neïth and the Path of Sagittarius

‘Temperance’ is the conventional name of the 14th Tarot Atu; Daughter of the Reconcilers: Bringer-forth of Life is the esoteric title. The magical power of the 25th path is that of Transmutations.[5] The Tarot of Marseille depicts an Angel pouring liquid between blue and red vases. It is not difficult to conclude the art of alchemy is portrayed there—Sagittarius is after all the mutable fire sign of the Zodiac. Neptune or Shiva, principle of the dissolution of aeons, is the governor of the mutable signs.

The 25th path of Sagittarius connects the sphere of the Moon or natural psyche with that of the Sun, the centre of the mind’s intelligence. The silver of the Moon and gold of the Sun are here fused into the stone of the wise or philosophic egg. These terms are metaphors for the ‘substance’ of the immortal principle. Fools will always attempt to apprehend the immortal stone—similarly, a child might seek to capture sunshine in a bottle. While the child may be rewarded with a faery song, the real fool will get nothing in return for the immortal soul that he has traded away in return for worldly acquisition.

The 25th path crosses the veil called Paroketh, marking the division between the world of appearances and the formless world of spirit, which is completely invisible to the profane. As such, the 25th path is called the Intelligence of Probation or Trial. The mind’s intelligence (Ruach) has its foundation in Yesod, the natural soul or body. It is only by trial and experience that the harmony and beauty of Tiphereth can be fixed as a permanent reflection in Yesod. The proving of the Great Work is not the kind of ‘proving’ that might convince the sceptic but is the proving of the very soul. To be a foundation for beauty, the psyche must undergo the purification of study, the organisation of the thoughts. Likewise, the body must submit to the beneficent astringent of the rituals and practice.

The operation of the Great Work can only proceed if the aspirant practices detachment, indifference to phenomena, and refuses to self-identify with the actions of the personality and events that seem to be taking place around. The ‘indifference’ is not to be thought of as lack of attention. In fact, the level of observation is intensified through meditation practice. As the spinner of the worlds, Neïth also fires the Arrow of Truth that spells dissolution of ego—a process that must begin no sooner than a foot is placed on the path. For that reason the Intelligence of Probation is often likened to a Dark Night of the Soul.

1. The name ‘Neïth’ may be pronounced approximately as nyet.
2. The term ‘abyss’ is often incorrectly identified with ‘chaos’ in the sense of confusion, disorder, which is in itself a profane misunderstanding of the original meaning of ‘chaos’. The primordial nun is the depth.
3. The formless ‘light’ or radiance that clothes Neïth is the particular attribute of the Priestess of the Silver Star of Atu II. The 13th path is a continuation of the 25th, and so the same ideas are resumed on a higher arc. By comparison, the 32nd path at the base of the Tree, Great One of the Night of Time, is usually imaged in the Tarot by the Goddess as visible nature.
4. The comment by the ancient Greek traveller Herodotus proves that psychology was not the invention of Freud, for he drily dismisses the vigils conducted in honour of Neïth as mere fantasy: “Herein everyone encounters the shadows of his own affections and fantasies in the night season, which the Egyptians call Mysteries.” The commentator on such rites is thus equipped only to reveal his own initiation, or the lack of it.
5. Qabalistic notes on Sagittarius and the 25th path are adapted from The Flaming Sword Sepher Sephiroth [Ordo Astri].