The Rosy Cross, emblem of sacrifice and love freely given, is the heart of the Order of the Star, whose members aspire to the Will and Love that is Thelema. The Order is for those who “follow the love of Nu in the star-lit heaven” (Liber AL, II: 21). 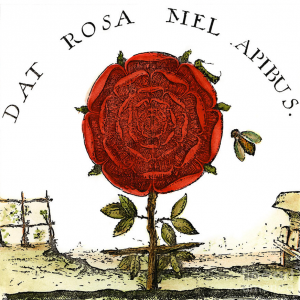 The Golden Dawn or Invisible Sun of Spirit is for the “servants of the Star and the Snake” (II: 21), which is the manifestation of Nuit and Hadit, and of the Great Work.

Let my servants be few and secret: they shall rule the many and the known.

Liber AL vel Legis, I: 10, conveys the Esoteric Doctrine of Thelema. Nuit and Hadit are absolute principles, whereas the Star and Snake manifest all possibilities as events in time and space. Thus, those who serve the Star and Snake express their will to manifest the law of Thelema, which is the law of love. Love and Will is the dual expression of Thelema, figured as Babalon and the Beast, a dynamic form of the Rosy Cross.

Rosy Cross and Heart of Aiwass

To find the Gnosis in the clear light we must first love and then understand the magical mythology of the words and spells, the hieroglyphs of the stars. From the Cross of Gold then blooms the Red Rose of love and life. The path of knowledge is by no means a path of purely intellectual attainment, for it requires the immersion of the whole self in the matter of the Great Work. The Holy Guardian Angel will not work the alchemy of transformation on the soul unless that task first be accomplished, which is itself of the nature of sacrifice, as symbolised by the Rosy Cross.

The Egyptian name of the Order of the Star initiated by Aiwass is Shemsu en Khabs, which has the value of 527.[1] The number 527 is the sum of the three ‘lights’ of the Caduceus, Aub, Aur and Aud added to spirit-fire.[2] The name is thus an expression of the Hermetic Light. The number 527 is also the sum of Wisdom (ChKMH), Truth (AMTh) and Love (AHBH). When the corresponding sephiroth Chokmah, Binah and Tiphereth are added together, the result is 11, the number of magical transmutation. As declared by Nuit, in Liber AL, I: 60,

My number is 11, as are all their numbers who are of us.

The number 527 is that of ZMH ZMH OZH RChM OZIAH, the five words that the Master of Pistis Sophia saw written in the robe given him after his transfiguration. The words can be translated, ‘Thought! Imagination! The sacrament of love and truth’. The sacrament is Thelema, for OZIAH has the value of 93, Will (Θελημα) and Love (Αγαπη).[3] RChM is a name of the Egyptian vulture, the emblem of Isis. The vulture (Neophron percnopterus) uses twigs as a tool to weave her nest. She is the zoötype of the weaver and of weaving—in this case, the weaving of the robe or magical Khu of the Master.

The vulture is the original type of the Tarot Fool, numbered Zero, placed on the 11th path of the Tree of Life. The vulture, protector of Egypt, carries the shen ring of eternal truth, a symbol of both zero as circle of All, and Libra, the attribution of Maat and the 8th Tarot trump Justice or Adjustment.

The Master explains the meaning of the five words he saw hidden in the woven garment thus:

O Mystery, which is without in the world, for whose sake the universe hath arisen, this is the total outgoing and the total ascent, which hath emanated all emanations and all that is.

The Greek name of the book, Pistis Sophia, is equal to 1,581. When this number is divided by 3, its lowest factor, the result is 527. The five words are therefore the three parts of the sum total of the wisdom of Hermes Trismegistus, which is that of ancient Egypt. The number 527 is also that of the Pleiades or ‘Doves’. The name of the stellar complex in the constellation of Taurus also means, ‘wonderful’, and ‘miraculous’. The small, sparkling cluster of seven stars was anciently associated with Venus as the evening star, which is depicted in the Crowley-Harris Thoth Tarot as the 17th Atu The Star (of Nuit). Earlier Tarot decks, such as the French Tarot de Marseille, depict a very large bright star amidst seven smaller stars. This is indicative of the evening star in the constellation of Taurus—and so life, love, strength, beauty, aspiration and inspiration.

Rosy Cross and Heart of Ouarda the Seer

When 527 is divided by its factor 17, the result is 31, AL, a number and title of the Book of the Law. Ouarda the Seer, the magical name of Rose Edith Kelly, the medium for the transmission of the book, has the value of 576, or 527 added to the 49 petals of the Rosy Cross.[4] Rose Edith Kelly, whom Crowley abandoned in Cairo and subsequently wrote off as a magical ‘failure’, was nonetheless the seer that, in Crowley’s words, “put me in touch with Aiwass”.[5] Rose made the ultimate sacrifice to the Great Work, that of her whole self, out of love. Aiwass, the minister of Hoor-paar-kraat, is the revealer of the timeless wisdom of Thelema, and of the secrets of the priest-kings and princes of the cult of Set in Upper Egypt. Set or Saturn, as the ‘manifester of the seven’ and destroyer through identity, is the power behind Venus.

Rose Kelly thereby opened a door in space, the starry window of imagining, that enabled Aiwass, the Setian prince-priest, to transmit the word of the law to those that would come after the ‘beast’ Crowley. As was written in Liber AL, II: 76,

Thou knowest not; nor shalt though know ever. There cometh one to follow thee: he shall expound it.[6]

The integers of the number 527 convey, ‘Wisdom (2) borne forth by the star (5) of Venus (7)’. Venus is Lucifer, the ‘light-bringer’. As morning star, she is the dawn herald—precurser of the Golden Dawn. As evening star, she is the Occult Light, the twilight envoy of dreams and nocturnal imagining, and the naked splendour of Nuit.

The Enochian word KROODZI adds to 527, and has the meaning of ‘beginning of things’ or ‘first image’. This refers to the Beast or Chaos as the manifester of Babalon or Cosmos, a notion central to the initiatory system of Thirty Aeons. The ‘first image’ is the power of imagining, ZMH. The word ZMH (zummah) is used in a technical sense as the kind of thought or meditation that follows a symbol back to its source with the infinite. It is the inner level of understanding the mysteries, where the outer level is symbolic or allegorical.

OZH RChM, the ‘powerful matrix’, is Binah or Babalon as cosmic creatrix, and Chokmah or the Beast as the cosmic will-force or utterance. The pair is the primal duality from which all emanations or manifestations on lower planes issue forth. When the primal duality is realised as infinite then “that which remains” (Liber AL, II: 9) is the spaciousness of Nuit, in whom is the containment of all possibilities, all imagining.

Rosy Cross and the Serpent of Wisdom

The initials of Shemsu en Khabs form the word ShNCh, ‘of the eternal’, which has the value of 358 and is a metathesis of NChSh (nahesh), the Serpent of Wisdom. The number 358 is that of MShICh (messiah), the ‘anointed one’, which anciently refers to a consecrated priest or priestess of the mysteries. Babalon and the Beast, Eve (Sophia) and the Serpent are one. The symbolism of the snake goddess Asherah or Tanith was corrupted in biblical scriptures to portray the Serpent as evil and Eve, the woman, as prone to sin and therefore deserving of eternal punishment at the hand of the vengeful biblical deity (IHVH). Gnostics regard Jehovah or Yahweh as an evil demiurge, and the love of Sophia and the Holy Spirit as the means of liberation.

Jesus and Magdalene, Babalon and the Beast, the Moon and the Sun, Isis and Horus, the Rose and the Cross, are simultaneously human, cosmic and supercosmic figures that teach the art of magick to those who love wisdom. The eternal abode of Nuit is a seamless garment or Khu.[9] It is an ark of love and a beacon of light to the servants of the Star and Snake, as declared in Liber AL, II: 21.

Think not, o king, upon that lie: That Thou Must Die: verily thou shalt not die, but live. Now let it be understood: If the body of the King dissolve, he shall remain in pure ecstasy for ever. Nuit! Hadit! Ra-Hoor-Khuit! The Sun, Strength and Sight, Light; these are for the servants of the Star and the Snake.

1. ShMSV N ChABS = 527.
2. Aub + Aur + Aud = 227. The Aub is the Astral Light, symbolised by two serpents, solar and lunar. The light of Aur is the channel for the spirit-fire, 300, that transforms Astral Light into Aud or ‘fragrance’, 11, the Starlight of Nuit. This is the key to the transmutation of the elements in the ritual called the Mass of Hormaku.
3. OZIAH is ‘truth’ (IAH) and ‘strength’ (OZ). OZH RChM can be construed, ‘powerful matrix’. RChM is the root of ‘womb’ and ‘love’ in the divine or impersonal sense (Agape).
4. Ουαρδα = 576 by Greek number values. The Rosy Cross of 49 petals variously symbolises Venus (7 x 7) as the principle of love, sacrifice and resurrection to new life. The sum of the sephiroth below the Abyss is 49, thus there are ‘50 Gates of Babalon’ the Initiatrix.
5. Quotation from The Law is for all. As evidenced by the list given in the aforesaid book, Rose was the first of at least half a dozen ‘scarlet women’ that Crowley subsequently wrote off as having failed him in some way. The tall, dark man with ‘hooded eyes’ and a ‘cruel mouth’ that appeared to Crowley in Cairo was certainly not Aiwass—whose identity was never known or guessed at by Crowley.
6. The riddle of the numbers and letters in the same verse adds to 419, according to the cypher key of AL, III: 47. The number 419 is that of teth the serpent spelled in full and of Sothis or Sirius; thus, one to follow the star.
7. The number 30 is that of ‘L’, as lamed or lamda. The corresponding 22nd path on the Tree of Life is imaged forth by Maat, the Egyptian goddess of the scales. The Book of the Law is thus the Book of Maat, ‘Truth and Justice’—the expression of cosmic and natural law.
8. The Valentinian Gnosis (2nd century CE) is attributed to the learned Egyptian theologian Valentinus. According to the account of Epiphaneus, Valentinus was born in the Nile Delta and educated at Alexandria. It is probable he was there influenced by the Christian philosopher Basilides. The Basilidian sect included three grades or degrees,  Material, Intellectual and Spiritual. Its aspirants were sworn to keep silence for a period of five years. The pillars of the temple were male and female figures.
9. The holograph MS of Liber AL, I: 26, informs us thus: “Thou knowest! And the sign shall be my ecstasy, the consciousness of the continuity of existence, the unfragmentary non-atomic fact of my universality.”