Faith in ‘lineage’ or Apostolic Succession has cast a shadow over organised occult communities for centuries. 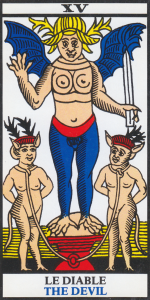 Authenticity, validation and legitimisation are essential to the world of law, business, government, politics, publishing and finances. Legitimisation conveys certain rights and privileges. It conveys authority. The ‘real’, the authentic, is a signature of trust, so that, for example, a person may be guided in their investments. When such validation is transferred to the realm of the esoteric, then the whole subject becomes somewhat less than transparent.

For example, the Apostolic Succession of Bishops is fundamental to the Roman Catholic doctrine. An unbroken line of patriarchs can be traced, according to the Vatican, back to the apostles of Jesus Christ. This conveys sacramental authority. According to the Epistle of Clement, the apostles appointed bishops as successors and directed the bishops to appoint successors. Since the Church has for centuries been divided into factions, many of these refuse to acknowledge the validity of the others. Legitimacy then exists within each exclusive group, while it is denied to all others. The arguments have continued for millennia, and will continue to perpetuity.

The causal chain quickly breaks apart when it serves to yoke an esoteric principle. Thus in some of the older Tarot decks, the 15th Atu depicts the polar twins, Adam and Eve, bound to the altar of the Devil of material and temporal power. The chain only holds Adam and Eve while they remain enthralled by the power of the wealthy governors of the world and their armies of obedient priests, bureaucrats and militia. Looked at another way, the Devil is simply the human ego, where identity is the primary concern.

This situation is by no means exclusive to the Roman Church. Esoteric Orders, or those who claim to be that, have followed the phantom of Apostolic Succession even to the present day. Each organisational ‘brand’ makes capital of the trust invested by the faithful, while denouncing the others as charlatans. And so the lurching dance of the official apostles of verified truth surges ever onward, all about the altar of the Devil of World Illusion, spurred on by the trumpets and drums of the slaves that serve mammon.

Faith in ‘lineage’ or Apostolic Succession has cast a shadow over exoteric organisations for centuries. To seek external validation or legitimisation is spiritual failure. As declared in the (Egyptian) Book of the Law, Liber AL vel Legis, II: 5,

Behold! the rituals of the old time are black.

Lineage: Cloud Upon the Sanctuary

The Order of A∴ A∴ or Astrum Argenteum is the term coined by Aleister Crowley for his supposed continuation of the Rosicrucian system of degrees based on the Tree of Life. That system was the legacy of the Golden Dawn of SL MacGregor and Moina Mathers, founded in the late 19th century, though the authentic Rosicrucian tradition existed centuries before until it disappeared from the Western world. In the first number of The Equinox Journal, Crowley presented ‘One Star in Sight’. This was his rewritten version of an earlier work by German philosopher Karl von Eckartshousen, The Cloud Upon the Sanctuary. The work was originally one of Christian Esotericism, expressing the inner spiritual tradition of the West in allegorical terms. 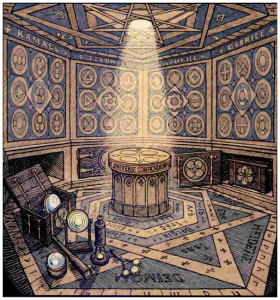 The use of such allegory already existed in the Rosicrucian tradition, for example, Fama Fraternitatis (1614). The Cloud Upon the Sanctuary refers to a mysterious Elect, which has existed since the beginning of time. Its vision of a future theocracy, embracing the world, contains echoes of systems of governance that have already existed historically but are swathed in the mist of legend—as for example, that of the ancient Egyptian pharaohs.

While the terms used are allegorical, it has always been the work of esotericism to make contact with what are called ‘inner plane intelligences’. Some have even sought to prove the existence of these, though all such attempts must end in failure. The stone of the wise is not a material substance and cannot be proved by the means of rational scientism, though it may be known. Karl von Eckartshousen resigned from the Bavarian Order of Illuminati when he learned of their insistence that enlightenment could only be obtained through rationalism. Crowley, on the other hand, in rewriting Eckartshousen’s work to suit his own designs, and to assume leadership of the Golden Dawn, declared ‘Scientific Illuminism’ as the true path.

The passing of the torch or beacon of light from one person to another, veiled in secrecy and silence, was not meant to refer to Apostolic Succession after the manner of Roman Catholic bishops. Such a succession or ‘lineage’ nonetheless holds considerable power for those who believe in it. Consequently there will always be those who claim it, so as to wield power and authority over others. Lineage then becomes, as with any much sought after commodity, a contentious subject. Argument sometimes leads to litigation, though more often than not the protagonists give vent to their rage through vilification and slander—much in the way that tomb robbers may argue and fight over the booty.

The question of authentication by lineage will nonetheless continue to hold a power of allurement, or ‘magical glamour’. The idea is intensely magnetic; its charge comes not from history or facts, but from romance and allegory, which has always been the language of the mysteries. The analogous mode of thought is a means of approaching truth that cannot be explained or described in rational terms without veiling that truth. The veil then becomes, as it were, a false Graal or object of the quest for knowledge and wisdom. Men and women may spend their whole lives pursuing such an object, for it is made luminous in the silver rays of hope; it is exalted in the golden halo of imagining. No sooner is it grasped than it becomes a handful of dry leaves that turns to dust, to be blown in the wind.

Lineage and the Blood of Saints

The mystery of blood and lineage, or Apostolic Succession, is best explained through an examination of the 15th and 24th paths on the Hermetic Tree of Life. These correspond to the Tarot trumps The Star XVII (Aquarius) and Death XIII (Scorpio). The placing of the Star of Nuit, Aquarius, on the 15th path is to end the ages old confusion between the blood of material generation and the pure essence that is the substance of spiritual regeneration. 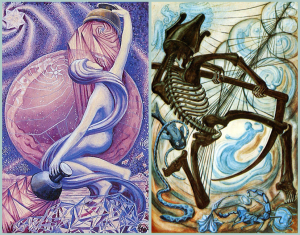 The 15th path of the Star of Aquarius is the intelligence linking Chokmah (Wisdom) with Tiphereth (Beauty) on the Tree of Life.  The path is called The Constituting Intelligence, of which it is said, “The essence of creative force arises in pure darkness”.[1] The ‘pure darkness’ is the thread of the infinite Ain Soph, the formless, limitless space that is the numinous source of all. The power of manifesting or begetting by division is the power of Nuit, the Goddess of the Stars. Thus, in the Tarot trump of the path, a woman, naked as truth herself, pours forth the waters of life from two vases. In Liber AL vel Legis, I: 59, Nuit declares,

My incense is of resinous woods and gums; and there is no blood therein: because of my hair the trees of Eternity.

Incense and fragrance are ancient metaphors for pure spirit or essence—that ‘creative force that arises in pure darkness’. The ‘darkness’ is more than merely an absence of light. There were two trees in the Garden of Eden: the Tree of Life or visible light, and the Tree of Death, Night or Nuit—the invisible light or pure essence. ‘Blood’ is the self-replicating power or energy that moves through all incarnated creatures. Nuit asserts, however, that her creative essence is not of blood—for her function is not to perpetuate life forms on the physical plane. For this reason it was necessary to counterchange the Tarot trumps on the 15th and 28th paths of the Hermetic Tree as according to the cryptic instruction of Liber AL vel Legis, I: 57.

By the change to the order of trumps, the starry 15th path or ‘window of imagining’ corresponds to Aquarius and Nuit, our Lady of the Stars. Aries, previously assigned to the 15th path, is the sign of the fire of blood, the blood of the Lamb in Christian mysticism. Aquarius, on the other hand, is the sign of the Waters of Space typified by the Egyptian hieroglyph of two streams of water or radiation. Nuit is the Egyptian goddess concerned with the occult or hidden side of nature. Her mysteries are those of sex and generation—not the generation of physical progeny, but that of the magical ‘child’ that is the true son or Sun-Star of Nuit.

The root of the Hebrew word for ‘resemblance’ or ‘imagination’ (DMINVI) means, ‘blood’. It is the self-replicating formula of all created beings personified by the ancient Egyptian god Besz. The Imaginative Intelligence of the 24th path of Scorpio works from the centre of the self in Tiphereth towards the desire plane of Netzach in order to bring about new modes of expression, vehicles for the self. On the way of return to Nuit, such vehicles are transcended and broken down—thus the full title of the Tarot trump associated with the 24th path is Child of the Great Transformers: Lord of the Gates of Death. The activity of this path comes about through the power of projecting mental images or thought-forms. The self-replicating formula is related to the creation of a magical ‘child’. This takes place through emergence, the process by which a network of interactions between individuals becomes an entity in itself. Such a complex, adaptive system transmits a particular current, vibration or wave pattern. Thus, spiritual regeneration, the occult formation of a magical Khu as opposed to an egregore sustained by a blood line, is well illustrated by the principle of wave patterns in physics—or the astrological glyph of Aquarius, the ancient Egyptian determinative for Nuit or ‘heaven’.

The proper function of an initiatic Order is to serve truth and the Great Work. The role of the members of such an organisation is to assist men and women with their initiation. The service, if freely given, does not require external validation from patriarchs or peers. True initiation cannot be given, bestowed or conferred by any man or woman to any other. What can be passed on, given or validated in that way is worthless in spiritual terms. In fact, it is worse than that, for it conveys self-importance and, ultimately, betrayal for the soul—a bitter cup indeed. Investment of power in lineage is therefore a misdirection of the will and a wasting of the energy of the self.

If we can free our minds from the archaic limitations of the rituals of ‘blood’ we may find that in the path of the Imaginative Intelligence, in the emergence of the Khabs and Khu, is hidden the stone of the wise and elixir of life. The stone or jewel is not a remedy for the inevitable afflictions of the mortal life. It is far more than that. It is the opening of the way that leads to ultimate transcendence of the earth-bound limitations of time and death.

© Oliver St. John 2018
This is an extract from the essay that forms part of the collection, Babalon Unveiled! Thelemic Monographs.