The Daughter of the Lords of Truth is the esoteric title of the Tarot trump Justice VIII. The Tarot and path correspondences of the Tree of Life are ingenious. There is a special relation between Leo and Libra-Maat. Leo and Libra revolve about Virgo, while Aquarius and Aries revolve about Pisces. 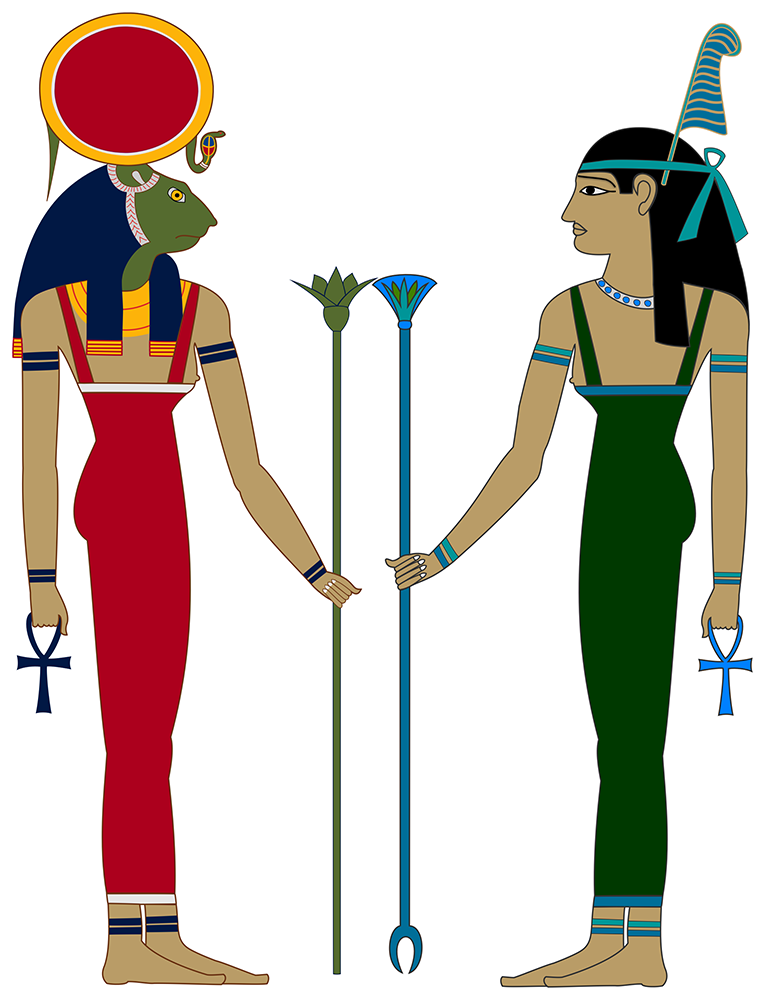 The original type of lamed, the letter ‘L’ of the Law of Thelema and 22nd path of Libra or Maat, was the ancient Egyptian ‘sickle’ hieroglyph. According to Golden Dawn Isis-Urania founder member, Wynn Westcott,

“VIII Justice [corresponds to] Lamed and Libra, and Strength [to] Teth and Leo—which causeth a transposition for these are cognate symbols. But at one time the sword of Justice was the Egyptian knife symbol of the sickle of Leo whilst the Scales meant the Sun having quitted the balance point of highest declination. So the female and the lion gave the idea of Venus, Lady of Libra repressing the Fire of Vulcan (Saturn in Libra) exalted. But earliest was the lion goddess to Leo and Ma to Libra with her scales, and this is better. Also Libra was given to Horus at one time.”[1]

The Golden Dawn changed the order of trumps to fit on the Tree of Life. La Force or Fortitude was usually numbered 11 and Justice 8. MacGregor Mathers and Westcott elected to swap the numbers round so the order of paths and letters and signs is the same as the order of trumps. Leo then corresponds with teth the serpent, the letter of path 19, and Libra to lamed and path 22. What Westcott was driving at in his lecture was the interchangeable relation between the Lion (ma’a) and the Woman with the Sword (ma’at). This is comparable with mutual reception in astrology, where the attributes are held in common through ‘dignity’. If we place the Scales of Maat on the Tree of Life then inevitably the beam will fall across the 19th path. Maat has a natural affinity with Gedulah, and Sekhet with Geburah: THE LION OF TRUTH. Furthermore, the esoteric title of the Lion of the 19th path is Daughter of the Flaming Sword.

The next step in the perfection of the Tarot came a few years later in Cairo, 1904, when Aiwass, conveying the oracle of Nuit (Liber AL, I: 57), tells Aleister and Rose Crowley that,

This greatly perplexed Aleister Crowley. It took him years to work out that the idea is to counterchange the positions of the Star and the Emperor. Presumably he got to this by meditating on the earlier counterchange of Justice and Fortitude by Mathers and Westcott. He next found that we can show the perfection of the arrangement with the diagram, ‘Double Loop of the Zodiac’.[2] He thought to revert the numbering of the Tarot to that which it had always been, Justice VIII and Fortitude XI. Otherwise he would have needed to number the Star as IV and the Emperor as XVII, which disrupts the integrity of the Tarot sequence. So the numbers of the Tarot, the ‘Book T’, are unchanged; only the locations of the two cards change on the paths.[3]

It happens, though Crowley never mentioned it, that this method of placement reconciles the Tropical Zodiac with the Sidereal Zodiac. By Alexandrian astrology, Aries is the sign of the spring equinox and Libra that of the autumn equinox.[4] This is so natural and right that it cannot be argued against sensibly. In the present precessional epoch, by Sidereal reckoning, the Sun aligns with Aquarius on 21st March, and with Leo on 21st September. So there, with our Tarot and Tree of Life schema, we have the perfect reconciliation—and the magical images, the Woman and Beast both in time and outside of time.

The original title given to the Cairo transmission, the (Egyptian) Book of the Law, was Liber L. By Qabalistic values, the letter ‘L’ corresponds to Libra and the Scales of Maat, ‘truth’, having the value of 30. The letter lamed is derived from the Egyptian ‘sickle’ or ‘scythe’.[5] It is literally ‘the Measure’ of Maat. The sickle hieroglyph means ‘truth, justified, true vision, true-speaking and true-seer’.[6] It also spells LION. Mau or Sekhmet is the principle of love in the most powerful or dynamic aspect, the love of truth. Thus Sekhet (power) and Maat (truth) are inseparable to our way of thinking. The Book of the Law, which is the Book of L, might be better named, the Book of the Seer (Soror Ouarda, Rose Edith Kelly).

Venus rules Libra, Saturn is exalted therein. The path of the Lion connects Jupiter (Maat) and Mars (Sekhet). Sekhet and Maat, Fortitude and Justice, are cognate symbols. The sickle hieroglyph is identical to the astrological glyph for Saturn, save for the tau cross-bar. Saturn is the ‘power behind Venus’, as Set-Hadit (the stellar Sirius) is the manifester of the seven stars of Ursa Major: Love is the law, love under will. Lamed is the sickle of Saturn and Sekhet, and as we know, this means both ‘true-speaker’ and ‘true-seer’. To speak truth and to see the truth through the eye of beholding are one and the same. The sickle has a dual function. Firstly, it is needed to clear the field for ploughing the furrow in which we seek the flint or jewel of Maat. It is the Opener of the Ways. Secondly it is needed to reap the harvest, which is analogous with the emergence or ‘second birth’ of a justified soul.

Scales of Libra-Maat: Knowledge and Power

The twin pillars of Maat are sometimes named, ‘Knowledge and Power’.[7] It is also quite common to hear it said that ‘knowledge is power’, and that the whole purpose of the magical arts is to gain knowledge and thereby increase power. This rests on the assumption that power is something that can be acquired, purchased, gained or lost—as though it were a thing in itself.

There is much made of the term ‘empowerment’ in New Age literature and academic (or psychological) occultism. Yet, with all this careless use of jargon, one seldom if ever finds anyone taking the trouble to define the term, to say what they mean when they use the word, ‘power’. The first definition in the Oxford Dictionary is, ‘the ability or capacity to do something or act in a particular way’. Very well then; so if we understand power as ‘the ability or capacity to do something’, then what is the source of such an ability or capacity? The emphasis with this common definition is on the verb ‘to do’; it is all about doing and acting. Yet all such doing, moving, going about the place, is merely the observed effect, the appearance. The exoteric concept of power then owes to causal determinism, where one thing or event is caused by another that preceded it, and so on for perpetuity. If we seek for the cause, the Will, we find that we know nothing whatsoever about it. All we know is effect or appearance, and we mistakenly judge this to be a cause. This whole idea of power then collapses in upon itself, revealing nothing. The solution is really quite simple. In Liber AL, II: 3–4, Hadit (Will) declares his nature:

To use a geometric analogy, the circle of all possibility (Nuit) is determined by the hypothetical point (Hadit). If we move the point, the curvature changes. Yet the point only exists by virtue of the circle. Neither comes first or second; every event is simultaneous and spontaneous. The ‘Will’ is esoteric. The ‘Effect’ is exoteric.  Hadit will not be known because he is the Knower, consciousness itself, which causes things to appear. Rational thought stops short, reaching its ring-pass-not at causal determinism.

What then is true power? For example, do politicians really possess a thing called ‘power’? They may produce acts of governance, and those acts may be enforced by the power of the State via the police and military forces. But if politicians seemingly have the power to command forces, from whence does that power originate? In the case of the politician, it depends entirely on the bargains, the deals they have made with others behind closed doors. It depends on the confidence of their financial backers. Warfare, the inevitable consequence of financial greed and lust for power, may depend on the weather, as evidenced by the 1588 defeat of the Spanish Armada.

Blind forces move modern economic systems, which is called a ‘market economy’. That power owes much to the chance element of the roulette wheel. The gamblers feel powerful on winning, powerless when losing, especially if losing all, in which case they may be seen sky-diving from an apartment window twenty floors above the ground. What then is the real meaning of such power?

There is only one true power in the universe. That power is the power of attention, observance. Every creature on earth but one exercises that power continually and with utmost precision, not being deluded for one moment into thinking that it can be won, lost, acquired, given or received. The one creature that alone confuses power and will is the human creature. The isolating doctrine of scientism and psychological determinism has ensnared the modern esoteric movement and thwarted its true purpose. Initiation, direct knowledge, is the remedy for the ill. The foundation of true initiation is not in learning what to think, but how to think differently—through the mode of analogous thought, which is the method of communication used by the ancient mystery schools.

1. Westcott, ‘Tarot Lecture, Part 4’, The Complete Golden Dawn Cipher Manuscripts, Translated and Edited by Darcy Küntz [Holmes Publishing Group, Washington, 1996]. The transcript is in note form and we have taken the liberty here of inserting parantheses and punctuation marks to clarify the meaning.
2. See Crowley, The Book of Thoth pp. 9–10, ‘The Double Loop in the Zodiac’.