The Egyptian Tarot of Thelema trump for the 22nd path of Libra is Maat VIII. Venus, the Glittering Splendour, is the ruler of the sign and Saturn is exalted therein. 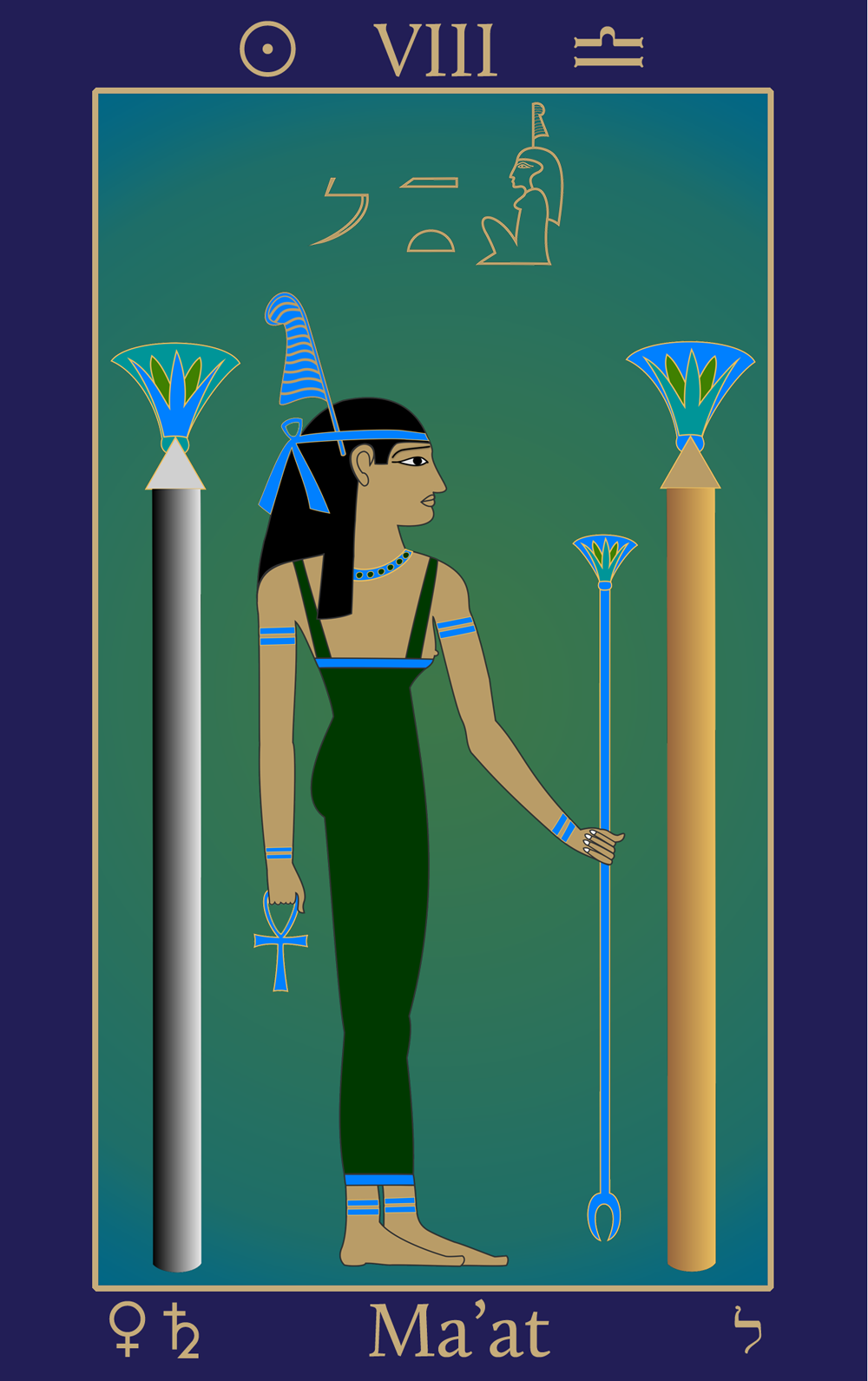 Maat is here depicted as a young woman clothed in green and blue, the colours of the key scale of the 22nd path. She has little in the way of ornamentation and is crowned with the ostrich plume, which declares ‘Truth’, her name. She bears the ankh of life and lotus sceptre. She stands between the two pillars of dual manifestation, or Form and Force. In ceremonial magick these are also called Knowledge and Wisdom. They are shown here as silver and gold, indicative of the Moon and Sun as the governance of spirit acting upon the Zodiac through the four classical elements of nature. Lotuses surmount the tetrahedronal caps of the pillars to show that all life pours forth from the power of dual manifestation.

The hieroglyphic name of Maat is shown at the top of the Tarot picture. The first letter is the sickle ma’a, ‘truth’. The letter lamed of the 22nd path was originally the Egyptian sickle or Lion of Truth. The two trumps for Leo and Libra are therefore counterchanged on the Tree, as are the trumps for Aries and Aquarius.[1] The straight edge hieroglyph confirms that Maat is the ‘Straight One’. The phonetic ‘t’ and goddess determinative complete the name.

The Neteru, which we call ‘gods’, are the personification of impersonal principles. Maat is the embodiment of truth and justice, natural law, balance or equilibrium. Hence Justice is the traditional title of the 8th Tarot Atu, while Daughter of the Lords of Truth: Ruler of the Balance is the esoteric title. Maat is the goddess of the scales of the balance. She is the mistress of creation and destruction and the balance of light and darkness. She is the regulator of the stars and the seasons, the ‘times’. She is immutable cosmic law and the law of nature. Maat is the cosmic principle declared in the sevenfold spell of the (Egyptian) Book of the Law, I: 57:

Invoke me under my stars! Love is the law, love under will.

Thus Saturn is the (Shakti) power behind Venus, the principle of love or union.

The Rituals of Maat

The Sun enters Libra at the autumnal equinox and balance of the year, when days and nights are equal in length. It is the gate of winter. In the southern hemisphere of the globe this is reversed and the vernal equinox heralds the gate of summer. At the ceremony of the equinox, the officers sound four threefold knocks, twelve in all, as they declare in turn,

Black and White!
Day and Night!
North and South!
East and West!
The Equinox of the Gods is here![2]

All ritual magick comes under the auspices of Maat. Everything in a temple must be balanced and harmonious. Likewise, the mind itself is set straight, purified by study, the essential discipline of the path of knowledge. In Maat all things are made equal and harmonious. According to a papyrus dating from the Middle Kingdom, she declares,

I have given bread to the hungry and clothed the naked.
I was a husband to the widow and father to the orphan.[3]

Everything concerned with Maat is double and so it is with all of nature. There is no ‘one-alone’ in truth. The power of Egyptian magical spells is in the words. To know they are true, and to speak them truly, is the perfection of Maat. As the daughter of Ra, Maat makes order from chaos by overcoming her counterpart Isfet, literally ‘unbalance’. She thus makes it possible for Ra to come forth from the primordial mound. Maat presides over the Hall of Neophytes or Hall of Dual Manifestation. In the ritual of the initiation of a Neophyte it is declared of the pillars,

Knowledge and Wisdom, their two-fold Might,
Rolling asunder Darkness and Night.[4]

Maat is the absolute rule of cosmic law, as was clearly set forth in the Pyramid Texts dated to more than 4000 years ago.[5] At a later time, all goddesses were paired with male gods. Maat is most often paired with Tahuti, known by the Greeks as Hermes-Thoth and to the Romans as Mercury. Notably, the 22nd path of Libra on the Tree of Life mirrors the 20th path of Virgo ruled by Mercury. The addition of the paths gives 42, the number of the Assessors in the Hall of Maat. Tahuti himself is frequently described as the ‘One who reveals Maat’ or the ‘One who loves Maat’. To love Maat, to perform true actions and to speak true words, is to receive Maat. A word must be heard ere it can be uttered.

The Oracle of Maat

Behold! I am the Eye of my father, Ra. I am the one in whom the word is accomplished. I am the Bride of Tahuti and the Measure of the Universe. I am truth, and the feather is my symbol. To pass my door, you must justify every part of your soul, and you must visit the beautiful fields of the grasshoppers. You shall bathe in the pool where the Sailors of Ra in his sun-boat bathe. Purify yourself in my name, and come before me as Horus Triumphant. For I stand upon one side of Ra in the ark of the heavens and Tahuti stands upon the other. And unless you have found the flint that is hidden in my furrow, then you shall not pass my gates. But if you know all these things, and if you have found me that dwells in the heart of Ra, and if you are pure—then Tahuti shall call your name! And you shall be known in the palace of the starry ones, and shall live forever and forever.[6]

The ancient Egyptians loved puns, the play on words. In the Oracle, Maat says, “If you have found me that dwells in the heart of Ra, and if you are pure—then Tahuti shall call your name”. One of the epithets of Maat is ‘The Me’, the Measure of all things. The heart is the place of the measure, the ‘me’ that is Maat. Another epithet of Maat is ‘Pure One’. The role of Maat at the Weighing of the Heart ceremony is a key one, as is her role in initiation. In the underworld, the hearts of the dead are weighed against her single Feather in the Hall of Double Truth. The crocodile goddess Ammit devours an evil heart and the soul cannot leave the underworld.

The 22nd Path of Maat

The 22nd path of the Tree of Life connects Geburah, the sphere of Mars, with Tiphereth, the sphere of the Sun. The 22nd path is called the Faithful Intelligence, and it is said that this path increases the spiritual powers. Furthermore, it is said, “all dwellers on earth are under its shadow”.[7] The 22nd path conveys the spiritual strength and power to realise every thought, word and deed as the expression of the Holy Guardian Angel. In one sense, it is the correct and discriminating use of the creative imagination to act in and upon the material world.

The magical powers of the 22nd path are Works of Justice and Equilibrium. The ‘working’ implies action, for manifestation is continuous. The yogi or yogini maintains constant vigil. The stilling of thought does not render the person unconscious; it is quite the reverse for it is the chatter of the mind that closes the doors of heaven and admits ‘one’ through the gate of hell.

1. See the essay, ‘Daughter of the Lords of Truth’, Babalon Unveiled—Thelemic Monographs [Ordo Astri]. The article may also be read online here.
2. From ‘Ritual for Sun entering Libra’, Ritual Magick—Initition of the Star and Snake [Ordo Astri].
3. James P. Allen, pp. 116, Middle Egyptian: An Introduction to the Language and Culture of Hieroglyphs.
4. From ‘Liber 930’, The Phoenix and other Stellar Rites of Initiation [Ordo Astri].
5. The Pyramid Texts of Unas are currently dated to around 2375–2345. Their source is thought to be far more ancient even than that.
6. From Ritual Magick [ibid].
7. Sepher Yetzirah. For commentaries on these ancient texts on the 32 paths, see The Flaming Sword Sepher Sephiroth [Ordo Astri].