The Egyptian Tarot of Thelema trump for the 19th path of Leo is Sekhet XI. The Sun, the Solar Light, is the ruler of the sign of the Lion. 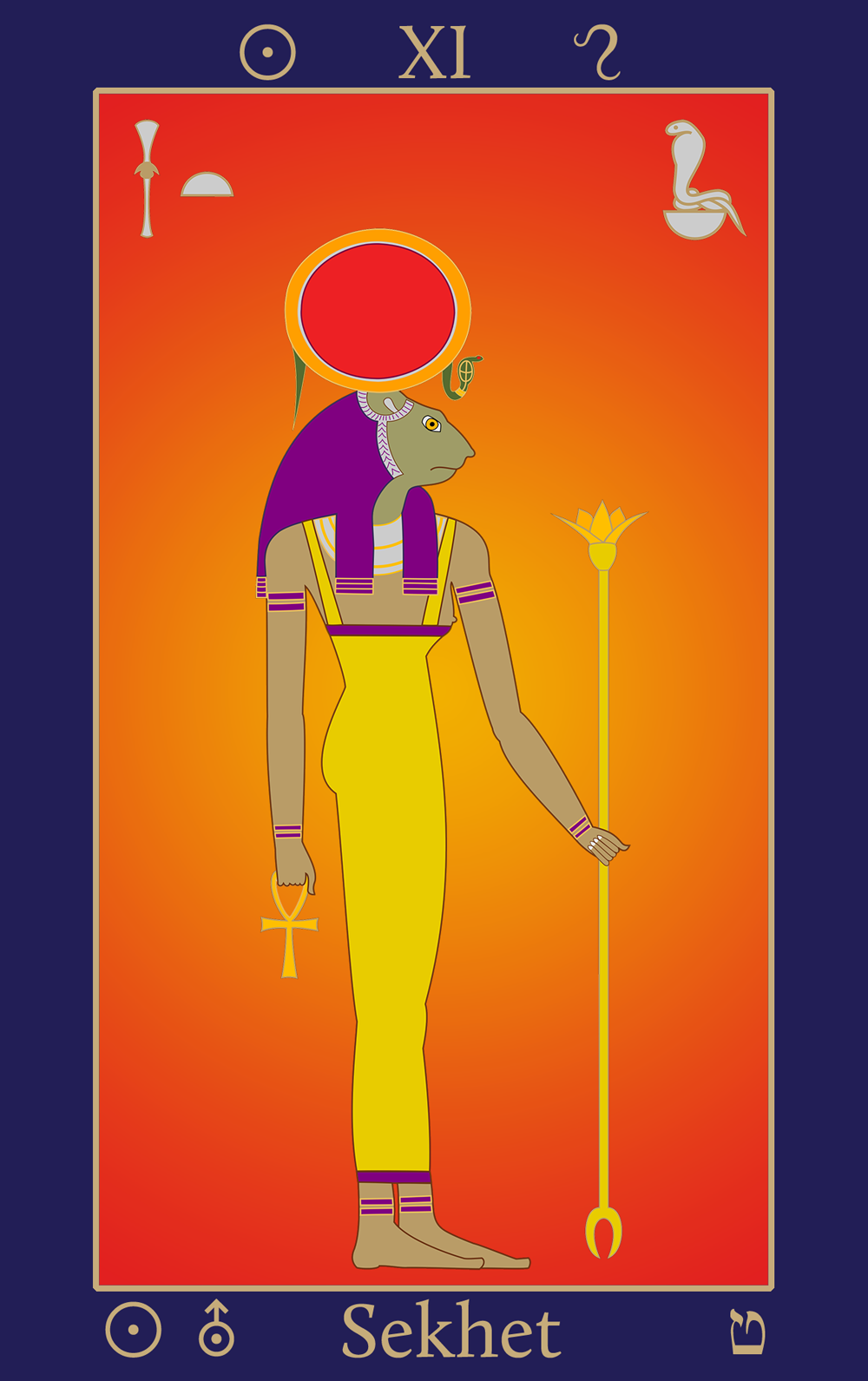 Sekhet, the Egyptian lioness goddess of heat and fire, is depicted in the centre of the Tarot design. She is crowned by the solar disc from which projects the cosmic cobra serpent, the animating spirit and energy of the Occult Force or Kundalini. In her right hand she wields the ankh of eternal life and in her left the lotus sceptre. The lotus, as a symbol, combines the four classical elements. She has her roots in the fertile mud, floats upon the surface of the waters and grows upward through the air, opening her flower to the solar light or fire. Sekhet is the original type of the ‘woman of blood’, the Scarlet Woman as described in the (Egyptian) Book of the Law, I: 15.

Now ye shall know that the chosen priest and apostle of infinite space is the prince-priest the Beast; and in his woman called the Scarlet Woman is all power given. They shall gather my children into their fold: they shall bring the glory of the stars into the hearts of men.

In Sekhet, Eve and the Serpent or Woman and Beast are combined in one image, for to her “is all power given”. The magick of transformation, by which the poisons of the Qliphoth or demon shells are purified and dispelled, is accomplished by the soul’s immersion in the underworld where Sekhet reigns with supreme power.[1] Her collar of grey rayed with amber declares the manifesting power of the true word or oracular utterance, which is symbolised by the cobra serpent emerging from a basket at the upper right of the Tarot card. The collar is also a type of protective shield, a further attribute of Sekhet, who protects the soul against the hostile forces of the underworld. The nemmys of Sekhet is purple, reflecting the 19th path at the level of Atziluth, the world of emanations.[2] Babalon or the Scarlet Woman is the material embodiment of Nuit; the Serpent is the embodiment of Hadit. According to the Book of the Law, I: 16,

For he is ever a sun, and she a moon. But to him is the winged secret flame, and to her the stooping starlight.

One of the many titles of Sekhet is ‘The Powerful One’, for that is the literal meaning of her name, derived from sekhem. Her name is thus spelled with the priestly sekhem sceptre hieroglyph in the lower left of the Tarot picture. As the Shakti power par excellence, there is some comparison to be made with Kali, adored by tantrik saints and yoginis.

The esoteric title of the Tarot trump, Daughter of the Flaming Sword, further indicates the close affinity between Sekhet and Ma’at. This is emphasised by the position of the 19th path of Leo on the Tree of Life, extending from the azure sphere of Jupiter to the fiery red of Mars. Jupiter is the natural sephira of Ma’at, the spiritual and natural order of Truth and Justice, while Mars is an apt station for Sekhet in her fiery and vengeful aspect. In many ways Sekhet and Ma’at are so close as to be interchangeable, and the 19th path of Leo combines the attributes.

The 19th path of Leo is called the Intelligence of the Secret of all Spiritual Activities or the Occult Intelligence. The path is the first that is wholly beneath the Abyss when descending, and the last before the Abyss when ascending the Tree. It is therefore the secret ruler and governor of all that is below, even as it receives the influence (mezla) from that which is above.[3]

The traditional magical power of the 19th path of Leo is the Power of Training Wild Beasts, which is, more accurately, understanding the language of non-human intelligences. Initiation requires the person to understand the Occult Force. As it is put by Hadit, the Serpent of Knowledge in the Book of the Law, II: 26–27:

I am the secret Serpent coiled about to spring: in my coiling there is joy. If I lift up my head, I and my Nuit are one. If I droop down mine head, and shoot forth venom, then is rapture of the earth, and I and the earth are one.
There is great danger in me; for who doth not understand these runes shall make a great miss. He shall fall down into the pit called Because, and there he shall perish with the dogs of Reason.

Those who work the path to the limits of reason may intuit the magical power of the Occult Intelligence, but there is great danger therein. Causal determinism has been with us since ancient times. It is resumed in modern times, more specifically as self-willed determinism. Unthinking acceptance of causal determinism means that Thelemic magicians become ensnared by the crapulous creed of scientism. The cults of self-love are also cast into the pit by the Daughter of the Flaming Sword, for the rational doctrine of the self as sole supreme leads to the self-confinement of Isolate Intelligence, and the “direful judgments of Ra Hoor Khuit”, as it is put in the Book of the Law, I: 52.[4]

The power of hypnotism is also associated with the snake, which is an inversion of the wisdom that overcomes all delusion. The snake of light, or Lion-serpent, analogously extends from the base of the spine to the nape of the neck. The serpent then enters the third eye chakra (ajna). When the primary goal of yoga is accomplished, the crown chakra (sahasrara) is brought into being.

Teth the Serpent is the letter of the path, shown on the lower right edge of the Tarot card. The serpent is one of the earliest magical images of Leo. Figures of Sekhet and the cat goddess Bast frequently showed a serpent spine or tail. Techa or djed, the ancient Egyptian form of the serpent, looks similar in shape to the letter lamed.

There is a close relationship between Ma’a, the Lion of Truth, whose letter is the sickle or Egyptian sword of Ma’at, and the oracular serpent. The relation is well established in the Tarot correspondences. The paths of Leo and Libra (19 and 22) effectively revolve around Virgo (Isis) and are interchangeable.[5] The serpent hieroglyph is both the root and phonetic of the name of Tahuti (or Thoth), god of magick, writing and words, especially the Word. The serpent is also closely identified with both Ra and his sun boat as both protector and antagonist, as explained with the previous zodiacal trump in the series, Atet VII. The Lion-serpent is a very ancient image of Leo the Lion, the 5th sign of the Zodiac ruled by the Sun. It is the astral or magical image of Leo and the 19th path.

With this Tarot trump we have chosen to show Uranus as exalted in Leo, as glyphed on the lower left edge of the card. As the Daughter of Ra and the Eye of Ra, Sekhet sends forth flashing rays that incinerate the foe. Uranus corresponds to Da’ath by the analogy of lightning bolts or arrows of Neïth striking down through the Abyss. The matrix of Ma’at or Isis, as seated on her Throne of Hollow Stone is thus made luminous.

Sekhet or Sekhmet is a warrior goddess as well as protectress. According to ancient Egyptian lore, the desert was formed from her hot, fiery breath. She is the protector of kings and leads them into battle. Upon death, Sekhet assists their passage through the underworld to her perfumed garden of paradise, called Sekhet A’aru, the ‘blessed fields’ from which the Greeks took their Eleusinian Paradise. Sekhet A’aru literally means, ‘Reed Fields’.

In a tale concerning the ending of Ra’s rule on the earth, Ra sends Hathoor in the form of Sekhet to destroy all those who conspired against him. Sekhet’s blood lust is not quelled at the end of battle and there is a danger of her destroying the entire human race. Ra then pours out beer dyed with red ochre or hematite so that it resembles blood. Mistaking the beer for blood, Sekhet becomes so drunk that she returns peacefully to Ra. Ra, the Sun, it is well to remember, is the ruler of the astrological sign of Leo the Lion. The Sun is the secret self of Sekhet, soul and daughter of Ra.

The priestesses of Sekhet performed a ritual before a different statue of the goddess on each day of the year. This has resulted in many well-preserved images of the goddess. Most of her statuettes are finely cut from solid granite, the most enduring stone—and very difficult to cut and work with.[6]

Feasts to Sekhet were celebrated at the end of battles, for the preservation of peace. During the annual festival held at the beginning of the year, the Egyptians danced and played music in celebration of the goddess. According to the few written accounts that have survived the ages, the celebrants ritually drank great quantities of red beer and wine to imitate the divine intoxication that calmed the wrath of the goddess when she almost destroyed humanity. The tale was at one time mirrored at the beginning of each year, when the Nile ran blood red with silt from up-stream. Some versions of the legend have it that Sekhet swallowed the overflow to save humankind from destruction.

There are historical records of tens of thousands attending the festival of Sekhet. The findings were made in the temple of Mut; when Thebes (Waset) rose to prominence, Mut absorbed some of the characteristics of Sekhet. Temple excavations at Luxor discovered a ‘porch of drunkenness’ built into the temple by Queen Hatshepsut, at the height of her twenty-year reign.

Such accounts have always delighted travellers and historians. However they reveal little if anything of the real mysteries of Sekhet, or even of the magical powers of her path. As the ‘Old One’, Sekhet’s origins are lost in antiquity. Like Set, the only begotten son of Nuit, she is considered first of all Gods. Today, knowledge of Sekhet’s path exists in fragmentary form. Her followers, contrary to that which we would surmise from the writings of historians and Egyptologists, continue her rites in secret.

1. The importance of the feminine power in the underworld is explained in depth in Babalon Unveiled! Thelemic Monographs [Ordo Astri].

2. The name Atziluth, the divine world of emanations, is derived from the root etz, ‘source’, ‘essence’. The word is etymologically related to Etz Chaim, the Tree of Life from which the gods are sprung.

3. The full commentary on the Yetziratic attributions of the paths is given in The Flaming Sword Sepher Sephiroth, in two volumes [Ordo Astri].

4. Esoteric Thelema is fully set forth in Babalon Unveiled [ibid]. In particular, ‘Lapis Philosophorum’. An abridged form of the treatise can be read online here.

5. See Babalon Unveiled [ibid], ‘Daughter of the Lords of Truth. The essay can also be read online here.

6. It is thought that more than 700 statues of Sekhet once stood in the funerary temple of Amenhotep III, on the west bank of the Nile.