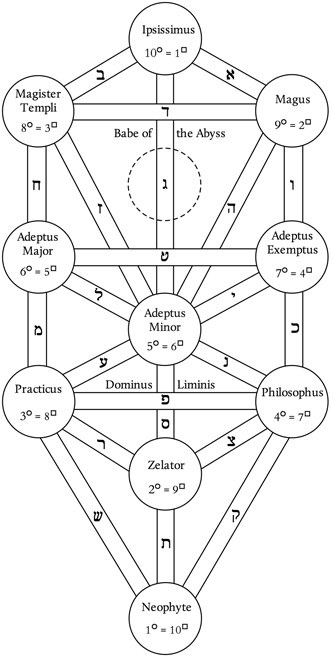 The magical grades or degrees of Initiation correspond to the Hermetic Tree of Life and are obtained through personal work done and the Keeping of the diary Record.

Entry to the Initiatory degrees of the O∴ A∴ involves practical work; a magical diary Record is kept. Initiation requires a sustained effort over a prolonged period of time. Applicants must have more than a superficial interest in the mysteries. They must be willing to practice and understand the four powers of the Sphinx: to Know, to Dare, to Will and to keep Silence.

Applicants for the initiate degrees must complete a Probationership term. If the work is approved, admission to the first degree is granted. Our book for the grade of Probationer is The Enterer of the Threshold. The general curriculum of the Order grades is set forth in Ritual Magick. The special rites of initiation for the grades of the middle pillar, including that of Neophyte, the first degree, are set forth in Phoenix. The philosophical basis of Esoteric Thelema and the various applications of this is set forth in Babalon Unveild! Thelemic Monographs.

The task of the aspirant to an initiatory Order is to build and contribute to the symbol of that Order. This may be realised variously as a vault, a holy mountain or a pyramid. Aspirants build the temple from their body, their mind, their heart and their will so that it becomes a perfected and balanced representation of the universe they inhabit.

Tiphereth is the crown and pinnacle of the First Order but it is from the Second Order that the temple receives light and so is fully realised as a living symbol. When the aspirant becomes an Initiate of the Second Order their task is to fasten themselves to the cross of their creative Will, to sacrifice their self to that Will so as to transmit the life-giving light back into the symbol they have helped to build and have made communion with. In this way modern magicians are partaking of the same act as our ancient Egyptian forbears, whose physical temples were built so as to unite the microcosm with the macrocosm, “As above, so below”.

Let it be remembered that the Great Work in our tradition is not merely about obtaining personal insights, powers, or even spiritual enlightenment; it is a service that each and every one of us freely gives so as to assist cosmic and praeterhuman intelligences to bring about the spiritual and material restoration of the earth. Those interested in becoming an Initiate of the O∴ A∴ should understand the following.

Those interested in Order Initiation should first read our Manifesto. Details of membership are provided here: Ordo Astri Membership.