The Egyptian Tarot of Thelema trump for the 17th path of Gemini is Shenut VI. Mercury, the Stellar Light, is the ruler of Gemini. The Twins of Gemini are here portrayed as ancient Egyptian sacred dancers, expressing the mobility and fluidity of Azoth, the Hermetic Light in dual expression. 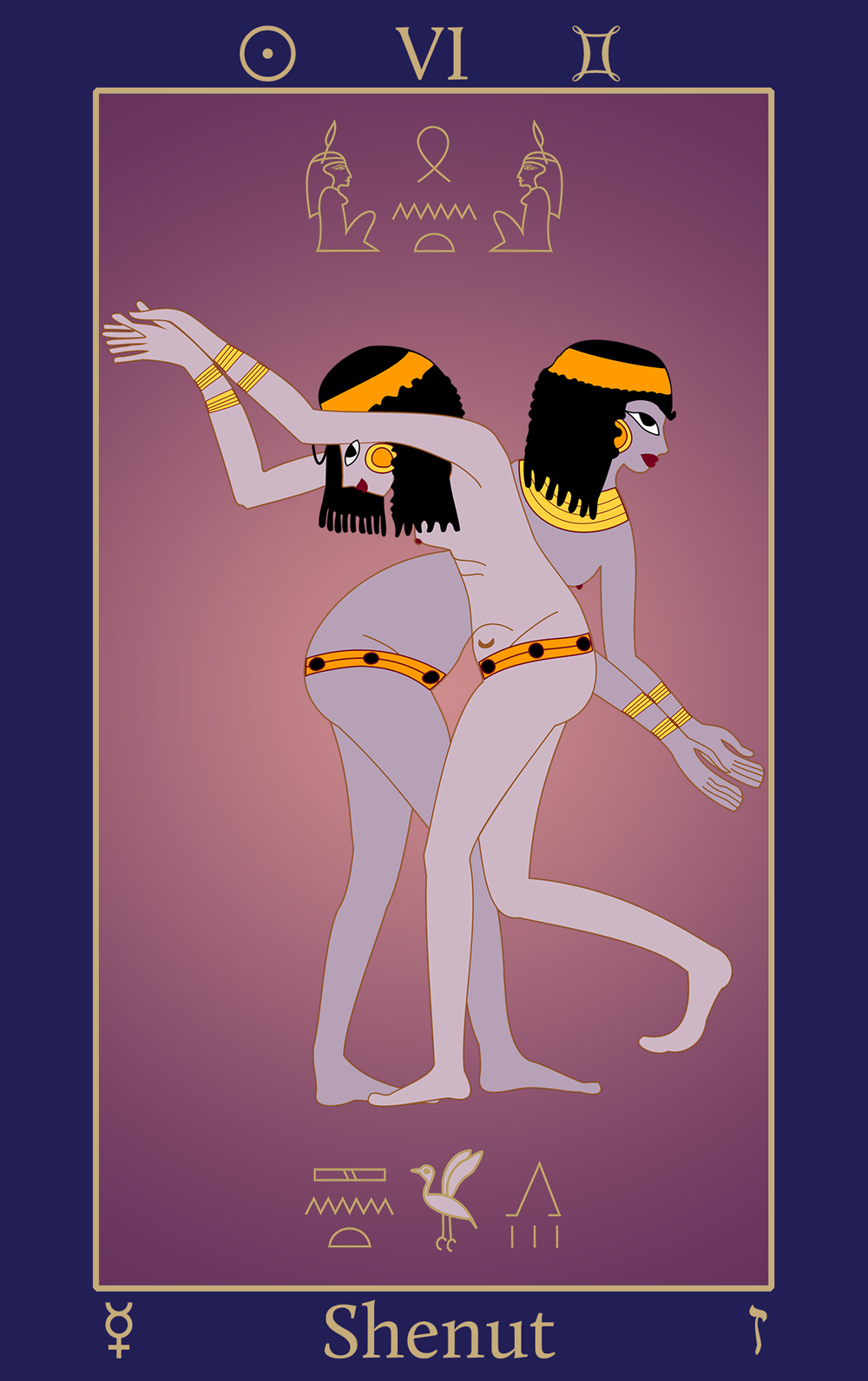 The esoteric title of the trump is Children of the Voice: Oracle of the Mighty Gods. The ‘voice’ is the oracle of Understanding and Wisdom. On the Tree of Life, these are Binah and Chokmah. The primary cosmic duality is personified in pairs such as Babalon and the Beast, Sophia and Logos, Eve and the Serpent.

The goddess Shenut was revered in the swampy Delta region of Lower Egypt. Over time, her identity was merged with Isis, Hathoor and other feminine deities. In the Delta, Shenut was identified with the acacia or Tree of Life from which the gods are sprung. Shenet (shent), the ancient Egyptian name of the acacia tree, also indicates the fruit of the tree and its products or essences. Thus the word of dual manifestation issues from the sacred heart and tongue of the goddess. The word shent also means ‘a seal’ or ‘impression’. The children of the word-vibration, Oracle of the Mighty Gods, convey the primal utterance through means of non-physical vibration.

The value of the name Shenut (ChNT) is 67, equal to the letter zain of the 17th path of Gemini, ‘a sword’, spelled in full (ZIN).[3] ChNT has the meaning of ‘magic’, ‘spells or incantations’. The root of the word is khen, ‘to dance’, which is etymologically related to kheni, ‘love songs’, ‘to flutter’, ‘to alight (as a bird)’. The ancient Egyptians associated dancing with birds and sky, all that is ‘high’, ‘above’. Thus Shenut is a goddess of the sky and space. The act of dancing is to describe space, to define it geometrically. Through movement, birth is given to form and the visible appearance of things. A further related term is khnem-t, ‘friend’, ‘companion’, also ‘mistress’.[4]

Gemini, the Twins, is the Zodiac sign of friends, lovers and companions. To utter a word, a word must be heard. The duality of the 17th path of Gemini is expressed as Sol and Luna in alchemical terms. The Tarot trump images this forth as dancing twins, called kheter in ancient Egyptian, a word that also has the meaning ‘friends’, ‘marriage’ and ‘union’.[5] The word is identical in sound to that of Kether, the first emanation, for there is no ‘singular intelligence’ in reality, only the principle of union. Esoteric Thelema declares that duality is no longer to be thought of as evil; the polar twins each contain the germ of their complementary opposite. As declared by Nuit in the (Egyptian) Book of the Law, I: 29,

For I am divided for love’s sake, for the chance of union.

The word kheter has the Qabalistic value of 217 (ChTR), equal to ChRT, ‘magick; engraving or impression’. The twins or magical children of Shenut are thus affirmed as the weavers of magick between the worlds, the dancers or serpents of the Caduceus of Hermes-Thoth.

The number 217 is also that of the god Set, whom the ancient Egyptians identified with Mercury. Set was increasingly demonised over long ages of time; his more positive attributes were gradually transferred to Thoth, whose totem animal is the Ibis. Thoth is the male counterpart of Ma’at. Together, Thoth and Ma’at oversee the transmission of the divine Word or True Will.

The Dancers of Shenut are the Oracle of the Mighty Gods, echoing the love-play of Nuit and Hadit. The 17th path of Gemini issues from Binah, the supernal Eden and Matrix, to reify in Tiphereth, the full beauty and radiant glory of the Sun. Thus, the oracle or transmission is fleshed by the divine word or utterance from the Throne of Isis. The Eye of Ra the Sun, otherwise Horus, is intimately associated with the goddess Hathoor, who appeared in the previous trump for Taurus, and who is the sovereign of music, song and dancing.

The 17th path is called the Intelligence of Sensation or the Disposing Intelligence in the Sepher Yetzirah. It is also called the Foundation of Tiphereth in the plane of the Supernals—since its root is in Binah and its termination in the centre of the Ruach intelligence. The 17th path of Gemini is the seventh from Aleph. The letter zain (or zayin) is the sword separating the subtle non-material matrix into the twin stream of time and space that pours forth from the Abyss. The sacred dance or Shenut expresses the resolution of reason through the union of love under will. It is the creation of the world and its magical recreation through the Great Work.

On the way of return, the 17th path crosses the abysmal threshold of human reason to find its root in the depth, silence and mystery of Binah, sphere of Understanding.

The magical power of the 17th path of Gemini is the Power of being in two or more places at one time, and of Prophecy.

Qabalistic notes are adapted from The Flaming Sword Sepher Sephiroth, comment on the 17th path.