The Egyptian Tarot of Thelema trump for the 31st path of Fire and Spirit is The Aeon XX. The path also corresponds to the dwarf outer planet Pluto. ‘Judgement’ is the traditional title of the trump, viz., the Last Judgement when souls are called to the resurrection. 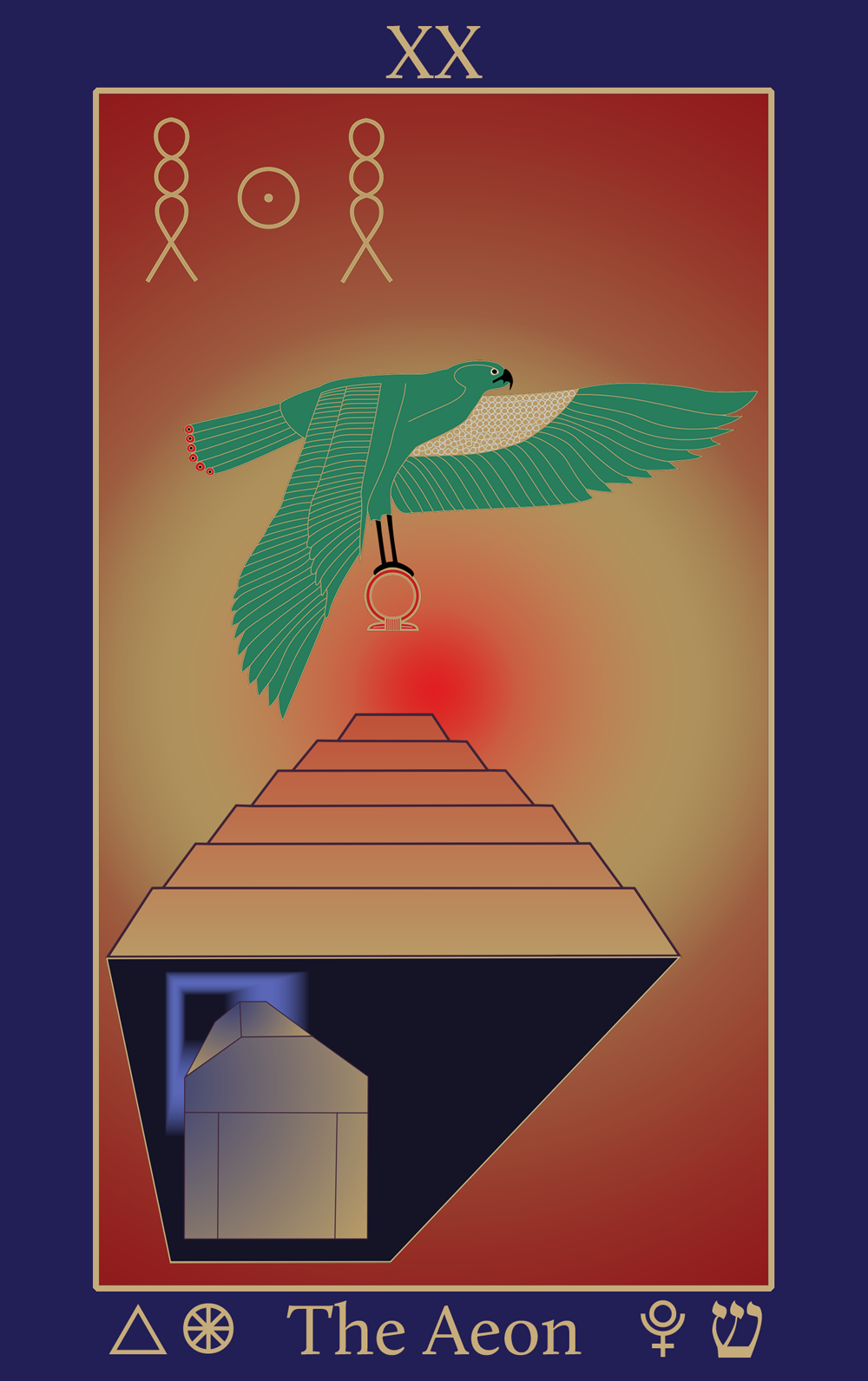 The esoteric title of this Tarot trump is Spirit of the Primal Fire. The spirit-fire is that which animates all living beings. It is the seed of the resurrection body. The mysteries of transmutation are summed up in the alchemical phrase, Igni Natura Renovata Integra, ‘Nature is renewed and perfected through fire’.

Shin is the letter of the 31st path and is formed from three flames joined at the base. Shin literally means ‘tooth’, but the significance is of spirit-fire or that which endures—bone, substance, eternity and immortal life. The ancient Egyptian source of the word is shen, the ring of eternity and the ‘round’, which is shown here being carried through the air by Horus in the form of a falcon.[1] The shen ring consists of the upper section or circle of the Ankh of Life, bound to a horizontal beam. It denotes eternity, the liberated spirit as opposed to life in the flesh.

At the top of the picture, to the left, are the Egyptian hieroglyphs for the Eternal (heh). Nuit and Hadit are shown in the abstract solar glyph between the knots of eternity as circle and point.[2] The knotted flax is thought to be a wick for a lamp. The wick burns and gives forth a flame of light without perishing. It is fed on pure oil, which is the perfection of life. There is a comparison to be made here with the Caduceus, the magical symbol of Hod that is situated at the upper end of the 31st path. In one sense, the Caduceus symbolises the dual power of the Kundalini or Occult Force. When the twin serpents of the Shakti Power cease to oppose and are, so to speak, woven together, the life force sustains an immortal existence. The appearance of things no longer deludes the soul.

Horus carries the shen ring over a symbolic representation of the step pyramid of Djoser at Saqqara Necropolis outside of Memphis, Egypt. Necropolis (Greek) means ‘city of the dead’, but this is really a misnomer as the Egyptians saw it as a place of eternal life. The Egyptian name is therefore heh, ‘Eternity’, identical in sound and meaning to the woven flax hieroglyph but spelled in such a way as to indicate a specific earth location.[3]

The base of the four-sided, seven-stepped pyramid is a trapezium or trapezoid. The parallel but unequal sides are indicative of the fourth dimension or non-Euclidian space-time. Beneath the desert of Saqqara is a labyrinth. Very large granite vessels are situated there in cells only big enough to fit them. It is unknown as to how these large and heavy objects could be placed in such a manner below ground.

What we do know is that the vessels, shaped somewhat like a sarcophagus or ark, were never designed to house a mummy. The insides of the sealed boxes are polished to mirror-like perfection. The function of these vessels appears to be cathodic, if we consider the accuracy and smoothness of their cutting. Their alignments in the underground labyrinth are very precise and are obviously intended deliberately. According to some, the vessels are subtle repositories of arcane knowledge predating the Ice Age and built to endure a catastrophe.[4]

Aeon, the title of the trump, means ‘eternity’. The term does not necessarily refer to a period of terrestrial time as is commonly supposed. It is derived from Greek philosophy and conveys the meaning of circles outside of time. The number 20 links The Aeon with Destiny X (Kaph), or the Kalachakra Wheel.

Pluto, a further symbol of primal fire, is the outermost planet of the solar system, symbolising Deep Mind. Pluto can designate Kether and Malkuth, the Alpha and Omega—for the end is with the Beginning. Pluto may symbolise revolution or upheaval, an upward surging current of irresistible force that sweeps away the old and ushers in a new state of affairs. On the old Tarot decks the dead were shown rising up out of their tombs, summoned by a blast from the trumpet of the Angel Israfel.[5] The death of the old signifies awakening to a new life, which is here the life of eternity. Horus, Lord of the Aeon, bears the key to eternity and flies across the liminal threshold of the worlds.

Spirit of the Primal Fire

The 31st path of Shin connects Hod, the sphere of Mercury, with Malkuth, the sphere of action and elements (or visible universe). The title of the path is the Perpetual Intelligence, so-called because it is concerned with the motions of the Sun and Moon as governing the revolutions of the Zodiac through the elemental principles. This path connects Malkuth with the left-hand pillar of Form by which spiritual knowledge manifests and is clothed in form. The fruits of such knowledge come to pass as future events from the point of view of ordinary human consciousness. This is why the Tarot trump was formerly called Judgement, depicting the dead arising from their tombs in response to the vibration of the Angel of Judgement on the day of be-with-us. In reality, the call to truth is eternally present. It is the seed of each moment in time—hence the perpetuity inherent in the title.

The “revolutions of the Zodiac” refer to the turning of the double-sided wheel of time. One side faces time while the other faces outside of time. From the perspective of the mortal flesh, time seems to pass by so that we experience a present that is moving forwards, with a past that is behind and a future that is in front. From the perspective of eternity, on the other side of the wheel, there is no past or future. There is nowhere to go—eternity encompasses everywhere at once. Time in the earthbound sense simply ceases to exist.

The geometric solid symbol of the 31st path is the tetrahedronal pyramid, which conveys admission to the path in the older ceremonies of the Golden Dawn.[6] The magical powers of the 31st path are those of Evocation and of Pyromancy.

1. For an explanation of the multiple perspective drawing of the falcon, based on ancient Egyptian art, see Lucie Lamy, Egyptian Mysteries pp. 18 [Thames and Hudson 1981].
2. For an explanation of Nuit and Hadit as circle and point, see ‘Lapis Philosophorum’, pp. 9–12, Babalon Unveiled! Thelemic Monographs [Ordo Astri]. An abridged version can be read online here at Ordo Astri.
3. The Egyptian name for the Necropolis or Eternal Place is spelled with three mounds or hills and the circle-cross determinative. See Budge, An Egyptian Hieroglyphic Dictionary, pp. 507 b.
4. The vessels were cut from solid granite and are upward of 70 tons.
5. Some sources have the Angel of the Last Judgement as Gabriel. The Angel is also associated with Raphael, Uriel and various others.
6. A symbolic ‘pathworking’ of the 31st path formed part of the ceremony of initiation to the grade of Hod in the historical Order of the Golden Dawn.

The Egyptian Tarot of Thelema is an entirely new concept in the field of practical magick, divination and Thelema. The 12 Zodiac trumps can be viewed here.