We know that American writer HP Lovecraft had no mystic pretensions, though he did say the dream that inspired the short story Nyarlathotep “might have been prophetic”. Kenneth Grant made much use of Lovecraft’s work, using it to formulate his idiosyncratic postermodenist notion of Thelema. The following quotation from Lovecraft’s The Call of Cthulhu (1926) is oft used but we make no apology for repeating it here.

“We live on a placid island of ignorance in the midst of black seas of infinity, and it was not meant that we should voyage far. The sciences, each straining in its own direction, have hitherto harmed us little; but some day the piecing together of dissociated knowledge will open up such terrifying vistas of reality, and of our frightful position therein, that we shall either go mad from the revelation or flee from the deadly light into the peace and safety of a new dark age.”

The disquieting prophecy was written almost a century ago. The application of the sciences, “each straining in its own direction”, has by now irreparably harmed us and all other life on this planet. Humanity has opted to enter a new dark age, and cannot turn back now—indeed, ‘turning back’ would necessitate confronting the lurking horror that haunts the works of HP Lovecraft, the horror of the Abyss. The fearsome apparitions arising on the face of the deep, as typified in the writings of Lovecraft and Grant, are merely the reflection of man’s consciousness, his image of himself as he truly is.

The book includes three complete short stories by Lovecraft: Nyarlathotep, The Crawling Chaos, and The Haunter of the Dark, plus a reconstruction of Lovecraft’s Necronomicon. There is also included a concise guide to Thelemic cosmology and the Qabalistic Art of Gematria. The Appendices reveal the Qabalah of the Necronomicon, background information to Lovecraft’s stories, and tables of Greek and Hebrew number values.

Dreaming Thelema features 17 paintings created for the book, using the Surrealist method of pure psychic automatism. Two of the paintings are reproduced below. The book is printed on photographic paper to preserve the integrity of the artwork. The paintings are integral to the literary content, and were created in the same current of inspiration. The artist was not given a copy of a book and asked to illustrate it. She created the paintings as the book was written, driven by the same essential Idea.

It is never possible to entirely separate the artist from the artist’s environment. Alchemy is about the transmutation of matter, extracting the subtle from the gross, recombining the newly formed elements. Fusing the disciplines of occultism and fine art was pioneered by Surrealist artist Ithell Colquhoun. Some of the techniques used in the artwork of Dreaming Thelema are identical to those of Colquhoun’s super-automatism. The forms and images are influenced by forces that are not under the artist’s conscious control. As with Surrealism, the idea is to defeat the inhibitions of the rational mind and achieve a union of natural and spiritual forces as well as a union of the disciplines of art and the occult. 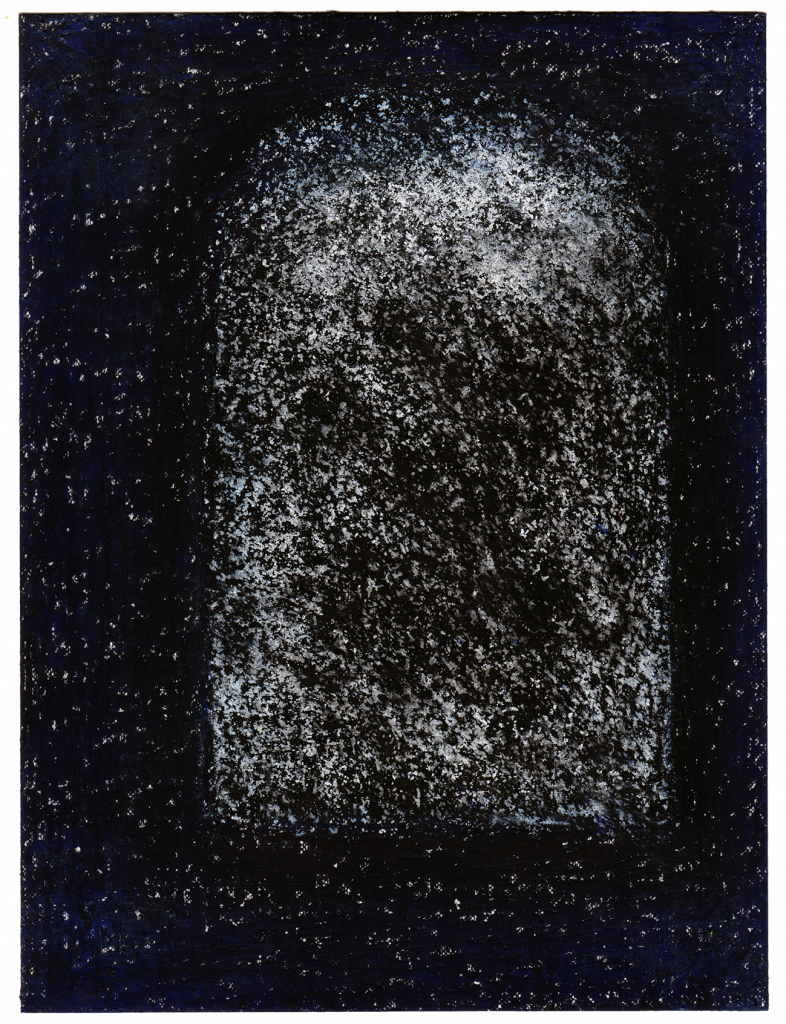 Stone of Stars by Soror V. A. A. is numbered #4 in the book. This was created through a version of parsémage (scattering); oil pastel is grated over ground of the same medium and worked in with a palette knife. [Click on the image to magnify.]

“Psychic automatism in its pure state, by which one proposes to express—verbally, by means of the written word, or in any other manner—the actual functioning of thought. Dictated by thought, in the absence of any control exercised by reason, exempt from any aesthetic or moral concern.”

The artist Ithell Colquhoun was a member of several magical Orders and knew Aleister Crowley and Kenneth Grant. The method of ‘pure psychic automatism’ was at first applied to literature. Aleister Crowley’s (Egyptian) Book of the Law, Liber AL vel Legis, is perhaps the supreme example of such automatism when fused with the knowledge and discipline of the occult. In The Mantic Stain: Surrealism and Automatism (for Enquiry, 1949), Ithell Colquhoun explained how automatism could be applied to painting.

“All these automatic processes … are closely dependent on the unconscious mood of the operator; for, if a number of experiments in a single process are undertaken on one day, a great similarity of form will be noticeable throughout … It is for this reason that I feel these stains to have a ‘mantic’ or divinatory quality, which may in some sort be compared with the practices of clairvoyants, who use ink splashes, sand, pins flung together by chance, and the irregular patterns left by tea leaves and coffee grounds to release the contents of the unconscious. The famous crystal globe or ‘scrying glass’ has approximately the same function. And all have an august ancestry in that they are traceably allied to the ‘great work’ of alchemy. … the alchemist would release the contents of his own subliminal fantasy by intently watching the contents of the alembic … The method is at least as old as Leonardo da Vinci—we all know the story of his gazing at the stains of damp in an ancient wall and seeing the suggestion of the mountains, ravines, and fantastic foliage of a dream landscape.”

“With a thick brush, spread black gouache on a sheet of shiny paper, diluting the paint here and there with water. Cover it at once with a similar sheet and press them together fairly hard with the hand. Then, by the upper edge, slowly lift this second sheet … ready to reapply it and lift it again; repeat until almost dry. What you have before you is perhaps only the old paranoiac wall of da Vinci, but it is this wall carried to its own perfection. In fact, if you entitle the image thus obtained according to what you discover in it after looking at it from a little distance, you may be certain that you have expressed yourself in the most personal and valuable way.” 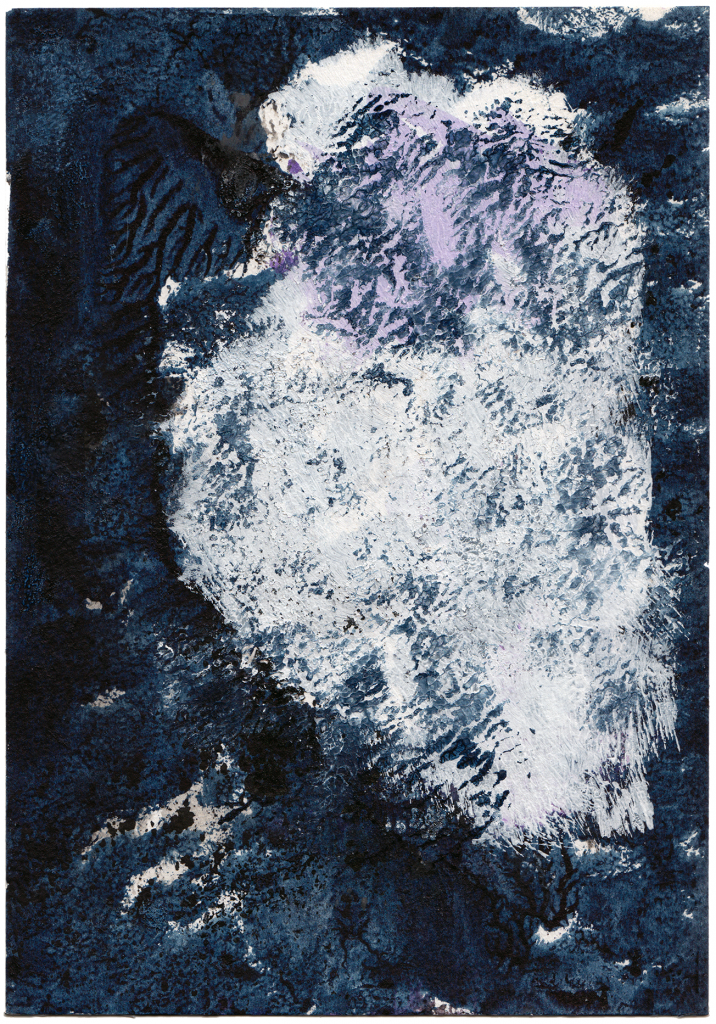 Moon-Glitter (above) is numbered #14 in Dreaming Thelema of Kenneth Grant and HP Lovecraft. This was created through decalcomania; gouache and ink over gesso ground. [Click on the image to magnify.]

The companion volume to Dreaming Thelema of Kenneth Grant and HP Lovecraft is Magical Art of Surreal Romanticism, from which the following quotation is taken.

“Colquhoun wanted to achieve a union of natural and spiritual forces as well as a union of the disciplines of art and the occult. She suggested that the four traditional elements of Hermetic magick might each have corresponding automatic methods.

The union of subject and object, the I-Self with all that is ‘other’, the Not-Self, is the goal of yoga or union, and is a prerequisite for magick and mysticism at advanced levels.”

Subscribe to our monthly Journal: Metamorphosis.
The Journal is free of charge and is delivered by email.