The Capricorn Solstice is depicted here by our Egyptian Tarot of Thelema image of the god Set. The Devil XV is the traditional title of the trump, while the esoteric title is Lord of the Gates of Matter: Child of the Forces of Time. The Egyptian god Set is no devil as such but is the Opener of the Year and Lord of Initiation. 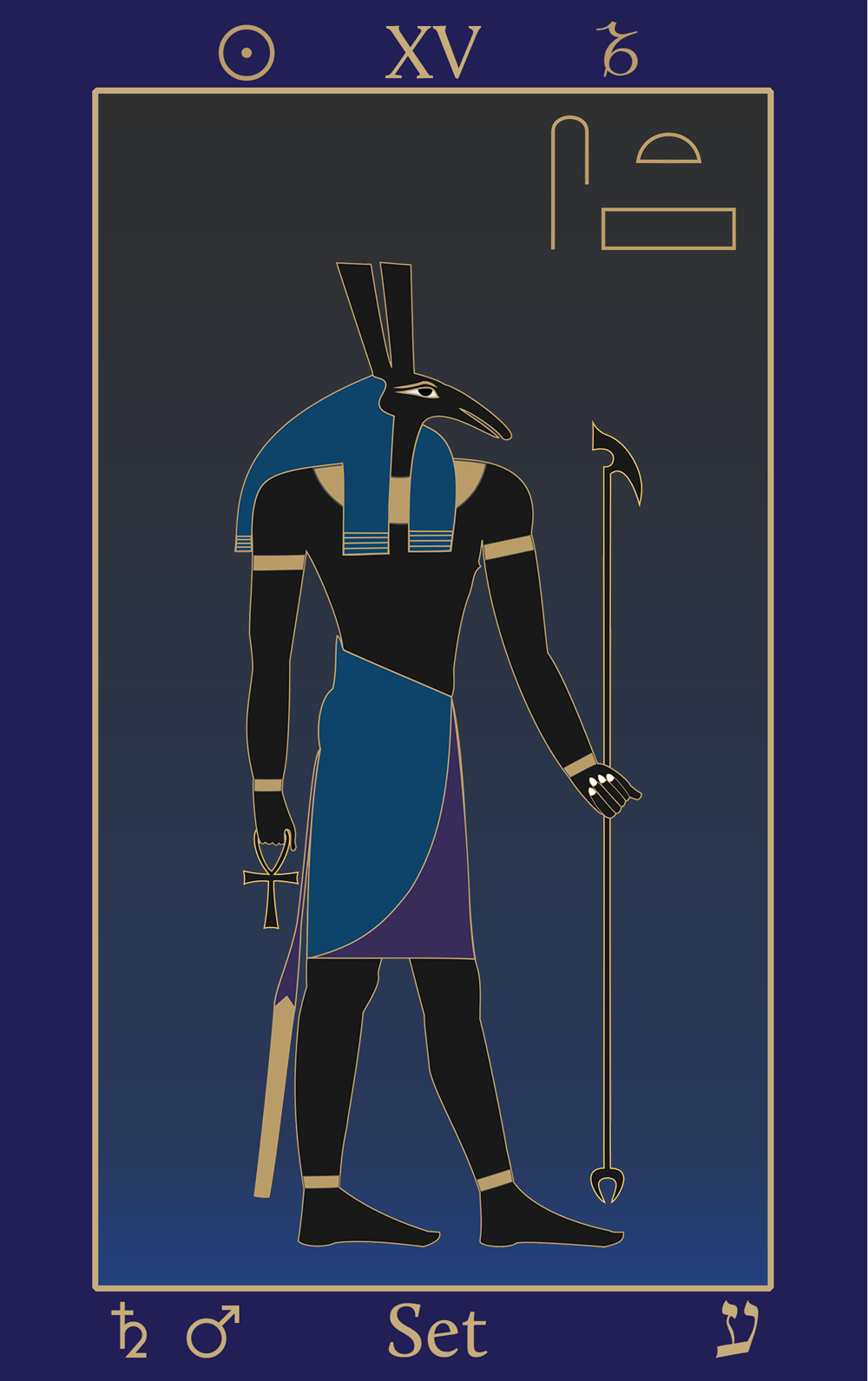 Set is shown here as God of the South, wielding the was sceptre of priestly authority in his left hand and the Ankh of Life in his right hand. His colour is black, his nemyss and apron of blue-black and indigo. His ornaments, sceptre and ankh are black, gold and grey as according to the Key-Scale colours of the 26th path and the ancient Egyptian title that was afforded Set, ‘the black and gold one’ (Set-Nubti). His peculiar ass-head with truncated ears has caused much bafflement. Some have thought he was modelled on a creature that has long been extinct. Whether this is true or not, Set is certainly among the most ancient of gods. Like Sokar, Lord of the Necropolis, Set is older than even the Pyramids. Perhaps he is older than the vast wilderness of the desert expanse.

Most descriptions of Set focus on the later dynastic periods of Egypt, where he was demonised and known only as the slayer of Osiris. However, Set is the first and only begotten son of Nuit, the goddess of space and stars. His birth is by divine parthenogenesis. No paternal intervention is required for a star to manifest the mother, for Hadit to evoke the appearance of Nuit. To discuss Set-Typhon in terms of Osiris is therefore a diversion from understanding Set’s true nature and function.

Set is the most difficult of gods to ‘pin down’; his very nature forbids it. He is on the other side of wherever we happen to be in terms of consciousness. Thus, the Egyptians tended to think of Set as Mercury, the shapeshifter. In northerly locations, typical Setian totems are corvids—the raven, crow, jackdaw and magpie. The function of Set is dual. Firstly, Set veils the invisible in an infinite variety of forms. Secondly, he destroys the illusion of the appearance of things. Small wonder then, that Set is not only ‘First before the Gods’, but is also the most misunderstood of all gods.

Set’s hieroglyphic name is shown at the top of the Tarot picture. The first two letters are phonetics (‘s’ and ‘t’) while the rectangle provides a further clue to Set’s mysterious origins. The rectangle means ‘stone’. This has agricultural and building connotations, as well as that of the graven image. Some of the earliest Dynastic kings of Egypt were Setians, and were noted for their great feats of architectural magnificence as well as introducing irrigation canals.[1]

Esoterically, Set is the layer of the foundation of the universe from ‘before the beginning of things’. The Iset throne of Isis typifies the foundation stone. Set and Isis, though portrayed as enemies in more recent times, are in fact inseparable. Set is the elemental nature of Isis and is, through her identification with Nuit, her only begotten child. The identification is made clear in the (Egyptian) Book of the Law, AL I: 22, where Nuit reveals herself as I.S.I.S.

I am Infinite Space, and the Infinite Stars thereof.

The Thelemic year begins for us not on the 20th March each year, but on the winter solstice, when the Sun crosses the zero degrees mark of Capricorn. The 26th path of Capricorn is the Renewing Intelligence. The time of year marks the first light of the star of awakening consciousness sounded in the depth. In Thelemic terms it is the Khabs (‘star’) in the Khu (‘radiance’). As declared by Aiwass and then the oracular voice of Nuit in AL, I: 8–9,

Cancer and Capricorn mark the height and depth of the Sun through the year. The equinoxes mark the seasonal crossing points. The four cross-quarters mark the Kerubic signs, Aquarius, Taurus, Leo and Scorpio. Commencing from the winter cup of Capricorn and Aquarius, we can follow the course of the Lightning Flash on the Tree of Life through the year. Capricorn and Aquarius, ruled by Saturn, send the current from the supernal Eden to the sphere of Jupiter, ruler of Pisces. The next station is Aries, ruled by Mars, in which is the Sun’s exaltation. Next comes Taurus, ruled by Venus, the lovely star. We then pass across to Mercury, ruler of Gemini. Arriving at the solstice of the summer cup, the Moon and Sun are conjoined and the Holy Hexagram declared, with the Earth as witness. The current then streaks back up the Tree in reverse order until the Capricorn solstice is again reached.

The 26th path of Capricorn connects Tiphereth, the sphere of the Sun, with Hod, the sphere of Mercury. The latter is also the abode of Set.[2] The Renewing Intelligence is the renewal and perpetuity of all created forms. Nature provides a useful analogy for the human psyche. Unless the intellect is able to adapt, it atrophies and becomes petrified, ‘turning to stone’. Tales of people being turned to stone are common in myth and legend. It is notable that in Cornish folklore, the origin of the prehistoric megaliths and stone circles that abundantly populate the land is illustrated by stories of the petrification of men, women and giants. For example: the Merry Maidens, the Nine Maidens of Boskednan, the Tregeseal Dancing Stones, and the Hurlers.

The identification of the personal ego with the forms or constructs that appear in Hod increases the limiting or restricting power of Saturn, ruler of Capricorn. According to Liber AL, I: 41,

The word of Sin is Restriction.

It is the desire to become free of material limitations that drives man to seek freedom. It is necessary, though, to understand the principles of nature and their operation in the world before any limits can be transcended. The primary limitation is man himself and his ignorance of natural laws.

Capricorn, Set and the Eye of God

The magical powers of the 26th path are the Witches Sabbath and the Evil Eye. The so-called Witches Sabbath is largely fictional, owing to the paranoid imaginings of medieval clerics, but the symbolism is peculiarly apt.[3] The backwards dance of the revellers, for example, is a recollection of exceedingly antique rites as well as the whole underlying theology of ancient Egypt. Egypt recognised no ‘progress’ or ‘evolution’, the ideal was always to go back to the source, before the beginning of things. This is a spiritual truth known by every yogi and mystic; it is not a symptom of a reactionary disposition among the Egyptians, as superficial commentators have supposed. The naming of the Evil Eye, known as a mark or sign of protection against evil in many countries around the world, mirrors the letter of A’ain, the 26th path, ‘an eye’. Set, as with most important Egyptian deities, is the upholder of the Eye of Ra or of God. In the Tantras, the ‘eye’ is the particular attribute of Shiva, who shares many of the attributes of Set. The letter a’ain has the value of 70, which is the manifestation of Venus (or Nuit) through the power of Saturn (or Hadit).[4]

Saturn is the planetary ruler of Capricorn. Mars, the energy required for renewal, is exalted therein. As with Shiva, the number 3 of Saturn or Binah is fundamental to an intellectual understanding of the god. The number 3 is the geometric foundation of form and likeness. It is the ‘stone’ or Set, the angular sides of the pyramid. It is the cipher of the matrix for all life and existence. It requires a triangular prism to split white light into seven colours, for only the triangle can reduce a phenomenon to its components. Therefore the rainbow spectrum is the sevenfold veil of Set. The number 7 is that of Venus, who doubles as both morning and evening star, and Saturn is the ‘power behind Venus’.

1. Even Seti I, the grandfather of Rameses II in the relatively late Middle to New Kingdom, was named after the great god and ensured the continuance of his cult.
2. If a ‘star’ determinative (seba) is added to the name of Set, the hieroglyphs spell ‘Mercury’, the planet. Thus Set and Mercury, and the qualities of Mercury, are identical. See Budge, An Egyptian Hieroglyphic Dictionary Vol. I, pp. 707 A.
3. The fictional origin of witchcraft is explained in ‘The Witches Sabbath and the Curse of Monotheism’, Babalon Unveiled! Thelemic Monographs [Ordo Astri].
4. Qabalistically, 70 = 10 x 7, the manifestation (10) of Venus (7).