The pentagram is a key part of the geometric extensions that are used in rituals. Anyone considering taking up practical work should have fulfilled the first two limbs of yoga, Abstentions and Observances, as set down by Patanjali.[1] Practical work is the third limb of yoga, not the first. 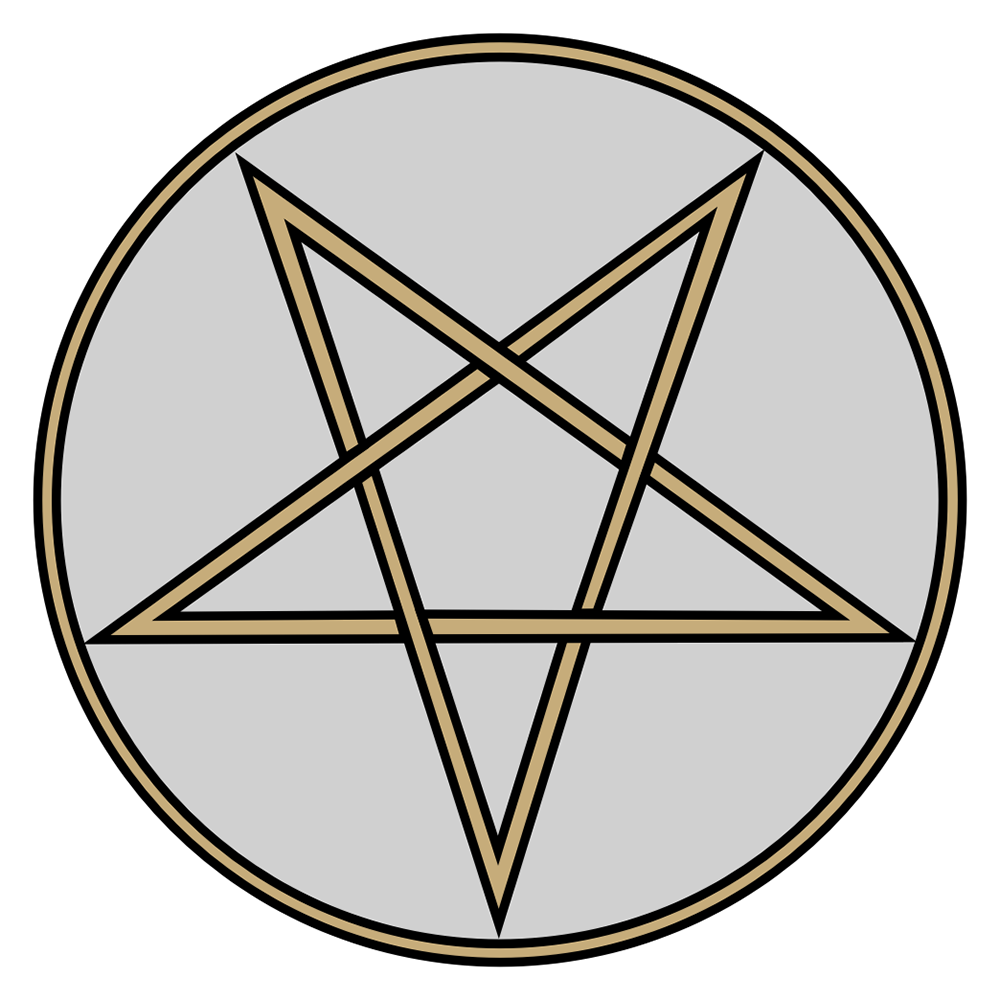 In broad terms, it is necessary for every Student to gain an intellectual understanding of the work. This involves getting a wide range of reading in the esoteric field. If the person wishes to take up a course with us, then we naturally expect them to make an in-depth study of our works. In ritual, the purifications come first, then the consecration. One must be prepared to spend long hours completely alone, reading, studying and thinking, away from all distractions. That is the greater part of purification. Only then is the person in any way prepared for the practical work. Theurgy requires utmost consecration, or dedication: the reserving of all energies for the special purpose.

To perform ritual we must at all times know what we are doing and why we are doing it. The magician must be prepared to study a little of astronomy, or at least, the geocentric framework that astrology is based on. The hermetic practitioner will want to know a great deal about the Qabalah, for that is the basis of ritual and ceremonial magick. Sacred Sciences includes astrology, magick, yoga, meditation and ritual. The aspirant is not required to speak fluently in classical Greek, or to know how to form Latin verbs. They will need to learn something of how these languages work. They will write the characters of the Greek and Hebrew alphabets and commit their numerical value to memory. Before all else they will begin by studying the diagram called the Tree of Life and the philosophical basis of the Hermetic Qabalah.[2]

The Pentagram: Averse and Aright

The question of the so-called averse pentagram has been frequently asked. It is all down to the mechanics of ritual, and has been explained in the Introduction to Ritual Magick—Initiation of the Star and Snake.[3] One must understand the cosmological basis of rituals. 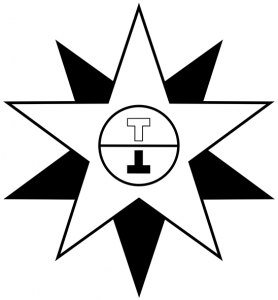 Ten is the number of Malkuth and of  the sephiroth of the Tree of Life. The point in the centre is the seed of eleven, the number of magick and of change. In this symbol, all dualities are resolved.

It is not a question of geometry; it is a question of orientation. Imagine we were to enter a room, square in shape. Upon the floor is painted or tiled a large circle, and within that is a pentagram star with the five points touching the edges of the circle. One of the points of the pentagram is pointing at our feet. Which way up is the pentagram? Then imagine that we walk straight across the room to the other side and turn around, facing the door by which we entered. Look at the pentagram again. Which way up is it now, do we think? Has the pentagram changed, or is it our relative position that has changed?

There is another important consideration. Do we think it is possible for a geometric form to possess moral qualities, objectively speaking? If we think the answer is ‘yes’, then it is better if we steer well clear of occult practices. Such a person will get into one hell of a mess, and very quickly. The Devil never needs to be evoked by the incantations and gestures of any magician, as Goethe portrayed in his version of Faust. The Devil is at all times present—and more than willing to enter into a bargain.

In some traditional rites the practitioner paces out the circle deosil, following the course of the sun as it appears from the earth. In our system the orientation is to polar North, the place of the immortal or imperishable constellations. In the historical Golden Dawn, the North was regarded as the place of greatest darkness. The North is in fact the place of greatest power, and is a gateway for that power to enter into the ritual sphere of operation. Far from emphasising material or ‘evil’ forces, polar orientation is the key to effective theurgic operations.

Attributions of the Pentagram

The symbolism of our reversed pentagram is identical to the symbolism of the pentagram that originated with the Golden Dawn. They in turn took the idea from Eliphas Levi, Transcendental Magic. That is to say, each point is attributed to Spirit, Air, Fire, Water and Earth respectively. 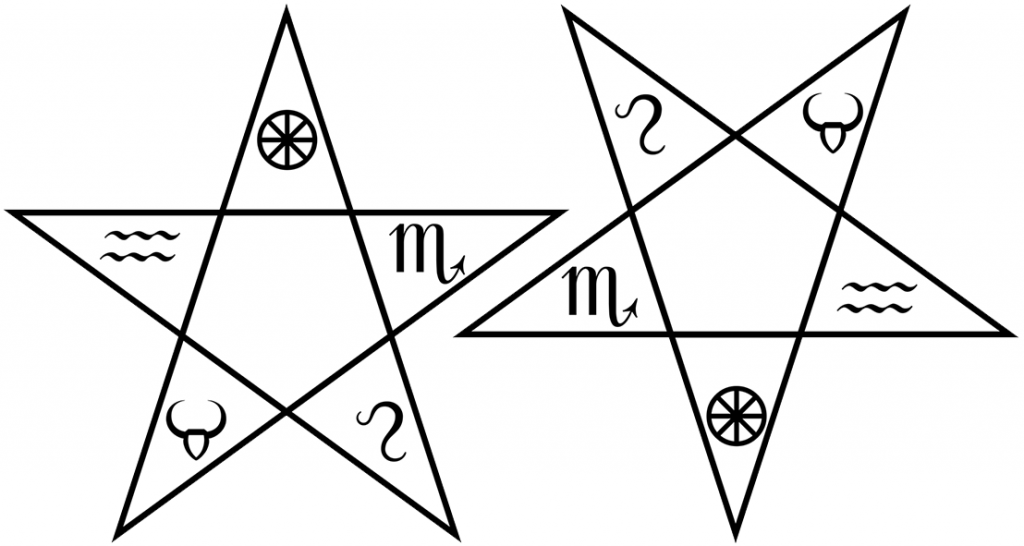 It was Eliphas Levi that first introduced the idea that the pentagram with point downwards was a symbol of the ‘Sabbatic Goat’, or ‘Baphomet’.[4] It is from there that some members of the Golden Dawn began to view the downwards-pointing star as something to be feared. Before Eliphas Levi published his formulation of the pentagram (1856), there was no particular rule about which way up a pentagram might be. Levi was a very subtle magician—infinitely more so than many who presume to know better. 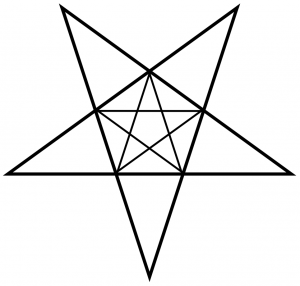 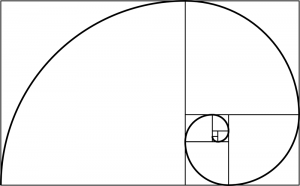 When the phi ratio is expressed as a spiral, it can clearly be seen that the ancient Egyptian hieroglyph for the throne or seat of a god, the iset, was drawn to express the perfectly irrational proportions of the Golden Mean.

For us, the averse pentagram, with the point of Spirit below the other four elemental points, is the descending influence of the Holy Guardian Angel. We can achieve nothing entirely alone. Love is the law, love under will. There are two currents, the descending lightning and the ascending serpent. The serpent is awakened through the descending stream. It is the polar attraction between Kether and Malkuth that works the miracle.

The Wars in Heaven

When a person is so heroic as to want to join us in the Great Work, we take it for granted they will want to inspect the armorum. They will want to know and understand how everything works. There are no directions in space other than those we posit by arbitrary appointments. Geometric forms do not possess moral qualities.

The last word should be left to Eliphas Levi, who perhaps inadvertently started the uproar of moral indignation over geometric forms—something that Euclid and his ancient Egyptian tutors would no doubt have found quite bewildering. Levi’s attribution of the ‘Baphomet of Mendes’ was not a correct one, and probably owes to confusion between the ram-headed god of Mendes and the unidentifiable chimera of Khem.[5] However, Levi was never one to be dogmatic over attributions, much to the horror of scholastic pedants. Of the equation between the reversed pentagram and the ‘Sabbatic Goat’ or ‘Baphomet of Mendes’:

A pantheistic and magical figure of the Absolute … The goat’s head, which is synthetic, and unites some characteristics of the dog, bull and ass, represents the exclusive responsibility of matter and the expiation of bodily sins in the body. The hands are human, to exhibit the sanctity of labour; they make the sign of esotericism above and below, to impress mystery on initiates, and they point at two lunar crescents, the upper being white and the lower black, to explain the correspondences of good and evil, mercy and justice. The lower part of the body is veiled, portraying the mysteries of universal generation, which is expressed solely by the symbol of the caduceus.

Honi soit qui mal y pense. The road is clear for those who wish to travel. Now we can all get on with some real work.

1. Our comment, Yoga and the Dweller on the Threshold, may be read here at Ordo Astri.
2. The Hermetic Qabalah is explained in clear, simple terms in the book required for our practical course: Hermetic Qabalah Foundation—Complete Course.
3. The cosmological explanation of the pentagrams and our ritual basis is given in the Introduction to Ritual Magick—Initiation of the Star and Snake. The phi ratio and Golden Mean is discussed in the ‘Foundation’ section.
4. For Eliphas Levi’s full description of his drawing of the ‘Sabbatic Goat’, see the ‘Explanation of the Figures’, pp. xiv Transcendental Magic.
5. The confusion between the ram-headed god of Mendes (Ba-neb-djedet) with a goat owes to the Greek traveller Herodotus. In a rather complicated account in his Histories, Herodotus describes the god of Mendes as goat-headed. Much popular fiction associating the worship or sacrifice of goats with ‘devil worship’ arises from this account. If Herodotus did indeed travel to Mendes, then the local Egyptians were pulling his leg! The goat is a creature that did not inhabit the Delta region of northern Egypt. [Herodotus, History, Book II pp. 42, Robin Waterfield translation.]

© Oliver St. John, 2018, 2022
The Lesser Ritual of the Pentagram is presented in several of our publications. It is also posted at Ordo Astri here.
Related Articles: Left Hand Path of Magick and Thelema

Visit Ordo Astri (or return to home page): Thelemic Magical Collegium
Subscribe to our monthly Journal, The 93 Current. The journal is free of charge and is delivered by email.