The Egyptian Tarot of Thelema trump for the 28th path of Aries is Hrumachis IV. Hrumachis, the Egyptian Sphinx, has various names, including Hormaku, Horakhty and Ra Hoor Khuit. The esoteric title of the Tarot trump is Son of the Morning: Chief among the Mighty.[1] 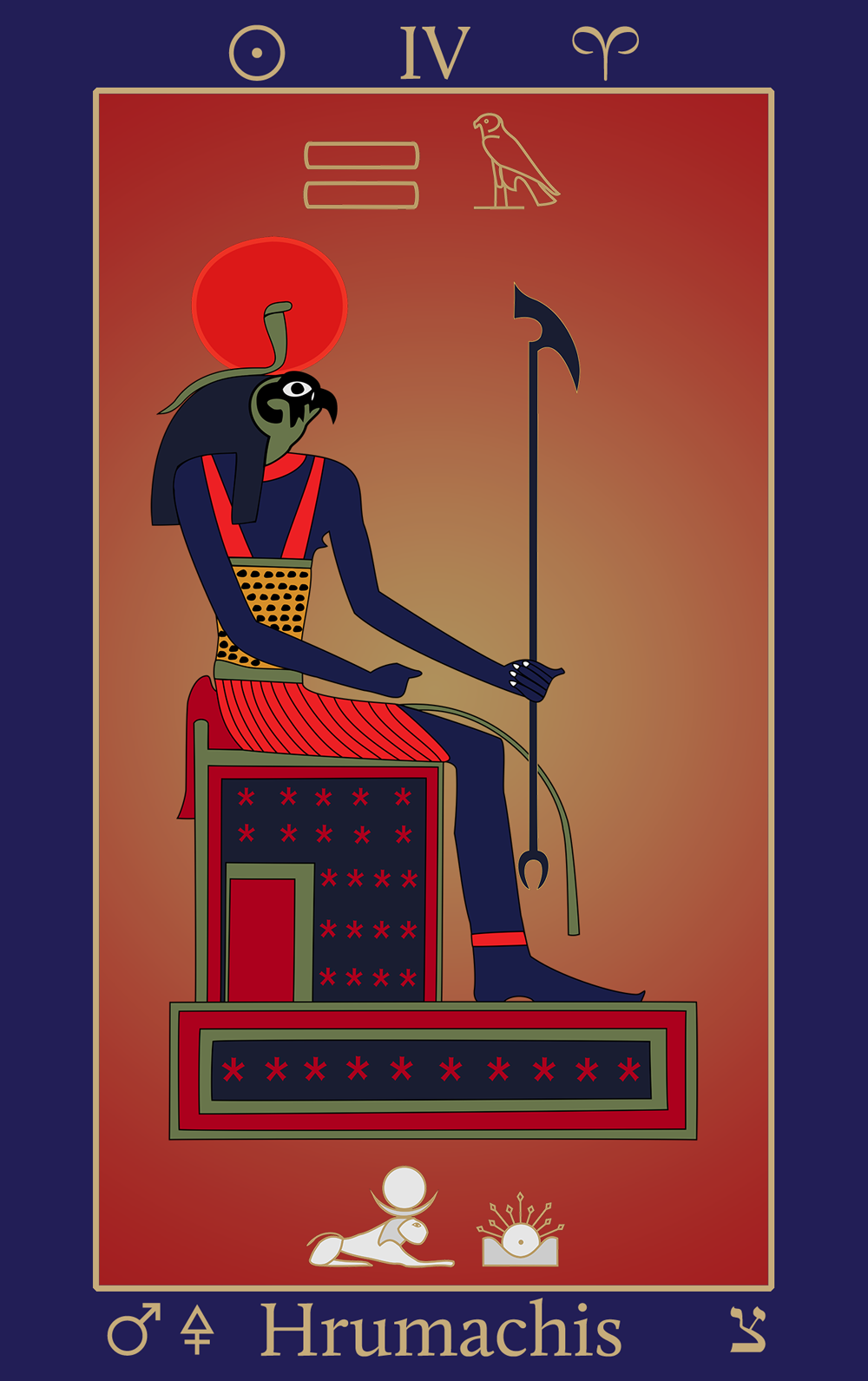 The Egyptian hieroglyphic name of Hor-em-akhet, from which the Greek Hrumachis is derived, is at the top of the Tarot picture. In the centre is Ra-Mentu or Ra Hoor Khuit, based on his image depicted on the Stele of Revealing. As Hrumachis, Horus is fully raised to the sky or heaven. The Sun and Serpent crown affirm his identity with both Ra and Typhon-Apophis. He wears the leopard spots, emblematic of the ‘space-marks’ or stars and the gift of divine prophecy. His nemmys is night-blue, the colour of the body of Nuit, which encompasses the whole horizon.

The 10 stars on the platform of the throne are the sephiroth in Malkuth of Assiah. The 22 stars grouped around the rectangular symbol of the Golden Mean (phi ratio) on the throne, the Foundation of the Universe, are the 22 scales of the Serpent of Wisdom. The god bears the Set-headed was sceptre of priestly will, ordinance or authority in his left hand. With his right hand he sends forth spiritual power.

The hieroglyph in the lower section of the picture depicts the akhet lion or Sphinx, who gazes eternally at the equinoctial point on the horizon. The horizon is akha, or ‘sun in the horizon’. This has various meanings, which include ‘moment in time’, ‘appearance’ and ‘ordination’. In Liber AL, I: 52, Nuit conveys a warning concerning the divination of space-marks:

Space-marks have cosmic and earthly import; they are as the points where on a cross-cross weave of fabric the warp meets the weft. As such, they represent the principle of unity itself, in its multitudinous expressions in manifestation. Thus Nuit’s warning is to forbid the ‘scientific’ manipulation of what can only be truly understood in terms of quality, not quantity or quantification.

The astroglyphs for Aries and the Sun are shown on the border at the top of the card, for the Sun achieves his exaltation in Aries at the vernal equinox. On the lower edge of the card is the astroglyph for Mars, the ruling planet. Next to that is the symbol of alchemical Sulphur.[2] Tzaddi, the letter of the 28th path of Aries, is to the right of the title. In the (Egyptian) Book of the Law, Liber AL, III: 34, Hrumachis is the name of Horus as risen Khu, or Sphinx.

But your holy place shall be untouched throughout the centuries: though with fire and sword it be burnt down and shattered, yet an invisible house there standeth, and shall stand until the fall of the Great Equinox; when Hrumachis shall arise and the double-wanded one assume my throne and place.

Hrumachis is the ‘Lord of the Double Wand of Power’ of Liber AL, III: 72.

I am the Lord of the Double Wand of Power; the wand of the Force of Coph Nia—but my left hand is empty, for I have crushed an Universe; and nought remains.

The word is uttered at Thebes (Waset), the Place of Ordinance in the South. The sonic vibration or 93 Current is sent forth upon the light-flowing stream of the Nile until it is received by the priests of Heliopolis (Aunnu) in the North. There, in the holy city dedicated to the mysteries of the Phoenix, Hathoor gives birth to Horus by divine parthenogenesis (i.e., without the intervention of a father). Likewise, Nuit gives birth to Set, her star of manifestation—As above, so below. Horus ascends to the sky or heaven as an immortal Khu. Likewise, the soul achieves resurrection by the magical power of utterance.[3]

The mysteries of Hrumachis, the enigmatic Sphinx, are further revealed in the hieroglyphic name: Hor-em-akhet, ‘Horus in the horizon’. The variant form, Horakhty, is literally, ‘Ra who is Horus of the two Horizons’. The akhet, or aker, is a gateway or door. The double lion-gate of the sun’s ingress and egress to and from the underworld (spring and autumn equinoxes) refers to Horus as the abstract principle of the horizon itself. It is a particular part of the sky—for example, where the sun rises at the equinox—and an equivalent portion of the Egyptian underworld. The name of Horus as ‘horizon’ or ‘dweller in the horizon’ relates to the circle as does his eye. The horizon symbolises the primordial boundary or limit. It is the division or utterance (Logos) by which we define the shape and meaning of the universe. The horizon also designates the boundary or crossing, the way of passing all liminal thresholds.

Hrumachis was often depicted as a lion with the head of a woman as with the Sphinx of the Giza plateau. At other times the neter took the form of a hawk or ram—especially when linked to the god Khephra, the rising or emerging sun at dawn.

Hrumachis is sometimes called HU, ‘authority’ or ‘will’ in the Egyptian hieroglyphic texts. In some passages of the Book of Coming Forth into Light, Ra is said to divide himself into two parts, HU, Will, and SIA, Mind (Greek Nous).[4] These are Chokmah and Binah of the Qabalah. Kings of Egypt were ‘Sons of Ra’ (Horus) from at least the 2nd Dynasty onwards.

Hrumachis: Lord of the Equinox

The Sun’s entry into Aries signifies springtime in the northern hemisphere. The full Moon after the equinox is in Libra, marking the first of the two balances of the year. The equinoxes are the aker gateways of the year leading into and out of manifestation. The head of the Sphinx of Egypt points towards the vernal equinox on the horizon; her tail marks the ‘fall’ or autumnal equinox. Thus, Hrumachis is Lord of all Aeons in time and space and that which is beyond all.

Hrumachis: Son of the Morning

The (Thelemic) key-scale Qabalistic correspondences for Hrumachis are of Tzaddi, the 28th path of the Tree of Life. The path extends upwards from Yesod (Moon) to Netzach (Venus).[5] The title of the 28th path is the Natural Intelligence, for it is the perfection of the nature of all things under the orb of the Sun. The desire of Venus reflected into the mirror of the Moon makes impressions upon the Astral Light. Much of the work of occultism is to create new forms as suitable vehicles for the incarnation of the mystic will to transcendence. The magical arts require that key symbols are held and fixed by concentration of will. On the other side of the coin, forms are created to ensnare and enslave the soul, as revealed by the ‘fishhook’ of the letter tzaddi. As such, Hrumachis is the magical power itself. Indeed, there is a close identification between Hrumachis and Khephra when all images are combined into the one image called Sekher Neter, ‘Neter of Neters’.[6]

The magical power of the 28th path is the Power of Consecrating Things. To consecrate a thing is to reserve it for a special purpose; it is to make a thing sacred. Nothing is made sacred, however, that was not already sacred from the beginning. The mystic path thus involves travelling backwards, following the symbol back to its source with all other symbols in the infinite.

The Aries Equinox and 28th path embody the principle of Governance. Horus is the pharaoh or king in his life on earth. As Hrumachis or Hormaku he is all-transcendent. The governance of the life of earth is translated to that of world-systems. As Hrumachis, the Initiate has passed utterly beyond.

1. The esoteric title of the Tarot trump is Son of the Morning, Chief among the Mighty. Lucifer the ‘light-bringer’ or Dawn Herald is frequently confused with Satan. Lucifer is generally thought to be the ‘son of the morning’ referred to in the book of Isaiah, 14: 12, which is a title of Venus as the Morning Star. The title of the 4th Tarot Atu is incorrectly given in Crowley’s ‘acquired’ work, Liber 777, as Sun of the Morning. The title refers to Venus, not the Sun. Chief Among the Mighty refers to the original Golden Dawn placement of the trump on the 15th path from Chokmah to Tiphereth. Curiously, Son of the Morning adumbrates the change of placement to the 28th path of Tzaddi recommended by Aiwass in the (Egyptian) Book of the Law, I: 57. The path has its source in Venus or Netzach, the seventh sephira or emanation.

2. This is one of three Tarot trumps corresponding to the principles of Salt, Sulphur and Mercury: Isis-Urania, Hrumachis and The Priestess.

3. The transformation of the soul into a living Khu, the mysterious personification of Horus the divine hawk, and his relation with the Sphinx is revealed in our translation of Egyptian papyrus Spell 78. The translation and commentary is given in, ‘Liber 364 vel Lux Occulta’, Babalon Unveiled! Thelemic Monographs.

4. The Book of Coming forth into Light is the more accurate name of the book falsely named the ‘Egyptian Book of the Dead’ by tomb robbers and Egyptologists,

5. Crowley did not revise the tables in Liber 777 in accordance with the instruction of the (Egyptian) Book of the Law, I: 57: “All these old letters of my Book are aright; but Tzaddi is not the Star.” Therefore in 777, the magical powers, weapons, gemstones and other correspondences of Aries are with the 15th and not the 28th path. The 15th path is properly that of Tarot Atu the Star XVII and zodiacal sign of Aquarius.